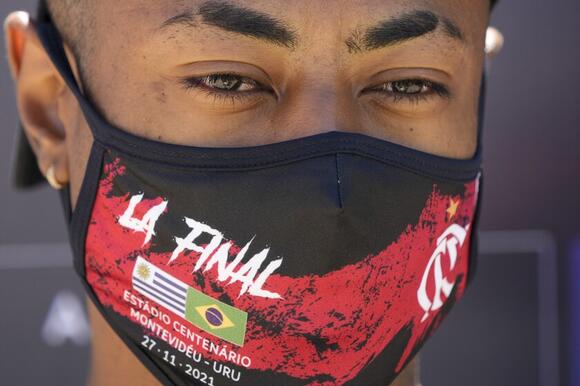 Brazilian clubs' domination of South American soccer is underscored by the Copa Libertadores final between Flamengo and Palmeiras on Saturday in Montevideo.

A Brazilian team will win the South American crown for a third consecutive time, an eighth time since 2010.

Flamengo won the trophy in 2019. Palmeiras is the defending champion thanks to a 1-0 victory against local rival Santos.

The winner on Saturday will become a three-time champion.

Whoever it is will put Brazil closer to Argentina in the tally of Copa Libertadores champions; 21 against Argentina’s 25, with many of the Argentine titles lifted early in the tournament’s history at a time when Brazilian clubs did not prioritize the competition.

The dominance of Brazilian clubs also includes the finalists of the second-tier Copa Sudamericana, won by Athletico this week. This year marks the first time all four finalists of both Copas have come from the same country.

Many Brazilian clubs, including some with competitive teams, are in debt and struggling to pay their bills. But money has never stopped pouring in for soccer despite the country’s economic crisis.

Marketing company Sports Value said in August that Brazil’s soccer market revenues neared $1.5 billion in 2019, before the pandemic. Chilean clubs made $200 million and Argentine clubs, due to the fluctuation in the country’s exchange rate, even less.

Also based on 2019 figures, Sports Value counted Flamengo’s revenues at more than $230 million that year, while Argentina’s Boca Juniors made less than $100 million.

The gap could widen next year. Brazilian media has reported several other big names could go home next year; defender Thiago Silva, left back Marcelo, midfielders Paulinho and Oscar. Colombia midfielder James Rodriguez is also among the targets.

Most commentators say Flamengo is the favorite to win the Copa Libertadores final. The Rio de Janeiro-based giant has two players who have frequently played for Brazil and could well be at the World Cup in Qatar — midfielder Everton Ribeiro and striker Gabriel Barbosa, the top scorer of the tournament with 10. The team also has Uruguay midfielder Giorgian de Arrascaeta.

Flamengo could complete an unbeaten campaign; it has won nine matches and drawn three.

Palmeiras goalkeeper Weverton is also among Brazil coach Tite’s favorites, though a step behind English Premier League-based Alisson and Ederson. The defending champions have lost once. Their top scorer is striker Rony, with six. But the team’s biggest strength is its defense. Portuguese coach Abel Ferreira is the first European to reach the final twice.

Ferreira and Flamengo counterpart Renato Portaluppi can win their second Copa Libertadores but both arrive under fire for their teams’ performances in the Brazilian championship. Both are far behind Atletico Mineiro, which could become champion next week.

SAO PAULO (Reuters) – Omicron has become the dominant coronavirus variant in Brazil, Health Minister Marcelo Queiroga said on Tuesday. “Regardless of any health measure you may try to adopt, it ends up coming in. Unfortunately, it already is the predominant variant in Brazil, we are seeing cases rising,” Queiroga told reporters.
PUBLIC HEALTH・13 DAYS AGO
San Diego Union-Tribune

One of Italian football’s most notable and important fixtures takes place on Sunday evening, as AC Milan host Juventus in Serie A.The fight for the title is very much on for the San Siro side, as they sit in second place, five points off local rivals and reigning champions Inter following their late win over Venezia on Saturday night.Juve are having an altogether more uncomfortable time of matters this term, still sat in fifth despite an upturn in fortunes of late. Four wins from their last five has closed the gap on the Champions League places, but they still have...
UEFA・1 DAY AGO
San Diego Union-Tribune

The U.S. men's national team finalizes its roster for the next three matches of CONCACAF World Cup qualifying as it prepares to play on freezing pitches.
MLS・2 DAYS AGO

Liverpool remain in the Premier League title race after a 3-1 win at Crystal Palace, but this victory – a 10th in a row over this particular opponent – owed far more to some world-class goalkeeping and a very questionable penalty call than to their own fine start to the match.The Reds were excellent for the first half an hour, then almost fashioned their own demise for the next 30 minutes. Only Alisson Becker proved an immovable barrier, and allowed the league’s second-placed team to move to within nine points of Manchester City, still with a game in hand.Early pressure...
PREMIER LEAGUE・1 DAY AGO
San Diego Union-Tribune

Bryan Reynolds has struggled for playing time at Roma but will hope to remedy that in Belgium for the second half of the season.
MLS・1 DAY AGO

Atletico Madrid scored twice in stoppage time to come back and beat Valencia 3-2 in LaLiga.Yunus Musah put Los Che ahead in the 25th minute with a 20-yard strike and Hugo Duro doubled the lead just before half-time.Atletico substitute Matheus Cunha reduced the deficit from a corner midway through the second half, but it seemed Diego Simeone would be left frustrated as the clock ticked down.However, there was late drama as Angel Correa equalised in stoppage time before centre-back Mario Hermoso fired in a winner from close range to spark wild celebrations from the home support.Sevilla had also fought back...
SOCCER・1 DAY AGO
AFP

Atletico Madrid pulled off an enthralling comeback on Saturday by scoring in the 91st and 93rd minutes to claim a 3-2 victory over Valencia that Diego Simeone will hope can revive their season. Atletico were staring down the barrel of another disappointing defeat at the Wanda Metropolitano when Yunus Musah and Hugo Duro put Valencia two up at half-time. Matheus Cunha pulled one back just after the hour for Atletico but the real drama was saved for injury-time, when Angel Correa equalised and then two minutes later Mario Hermoso struck the winner to complete an incredible turnaround. After six defeats in their previous 10 games, Atletico will hope a stirring victory can serve as a springboard for the second half of the season.
UEFA・1 DAY AGO
The Independent

“Reunite” and “refocus” were two words Mikel Arteta used to describe what Arsenal are hoping to get out of their trip to Dubai during the two-week winter break. After the last couple of months, time away is no bad thing. If only to draw a line under their current malaise. For the first time in 27 years, Arsenal have the ignominy of failing to win their first five games in a calendar year. That being said, perhaps those aren’t quite the areas that need to be cultivated or honed. Sunday’s draw against Burnley was many things. Infuriating for the Gunners,...
PREMIER LEAGUE・10 HOURS AGO
San Diego Union-Tribune

Spanish Vuelta to return to Barcelona after 11-year absence

What the papers sayThe Manchester Evening News says Jesse Lingard is looking to secure a loan move away from Old Trafford in the January transfer window. The 29-year-old midfielder has made just nine Premier League appearances this season, and it is believed Newcastle are interested in a potential loan deal.Brentford are finalising a deal for former Tottenham midfielder Christian Eriksen, according to the Daily Mail. The 29-year-old’s contract is reportedly for six months with an option for a one-year extension, however it all hinges on whether Eriksen completes his medical following his collapse during Denmark’s Euro 2020 match against Finland...
PREMIER LEAGUE・12 HOURS AGO
The Independent

If Chelsea’s first two victories this month had amounted to a sort of suffocation, with the nature of their dominance slowly crushing Tottenham with a vice-like grip, the third act of this one-sided derby felt rather more spectacularly fatal. Yes, the goal itself that broke the deadlock was one of those truly breathtaking moments: a stunning Hakim Ziyech shot that gathered certainty as it curled towards the top corner. But the manner of this 2-0 victory, and the vast gap between these two close rivals, has felt as though it has only become more stretched with recent familiarity.There will be...
PREMIER LEAGUE・1 DAY AGO
The Guardian