When I Get Asked Who I Support, I Say I Don't Watch Football' -Tottenham Fans React To Embarrassing Loss Against Mura In Europa Conference League 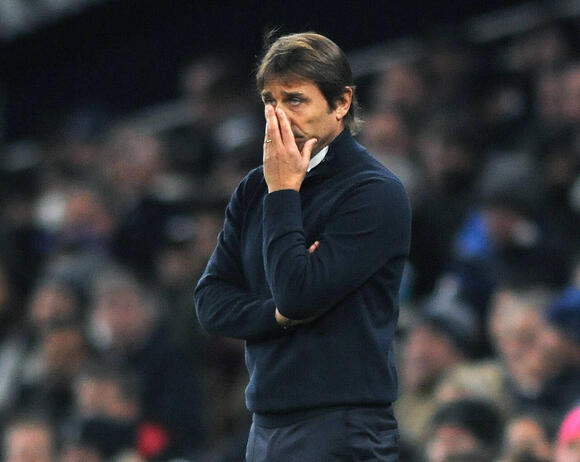 Antonio Conte's men face a barrage of criticism after possibly suffering the most embarrassing defeat in the club's history. Tottenham now find themselves out of the qualification places in Europe's substandard competition.

Social media is one place fans vent their frustrations, which Spurs fans have took full advantage of, directly through Tottenham's official Twitter page.

One fan so embarrassed by his team, he can't admit is support for them to others.

"When someone asks me who I support I say I don’t watch football. That’s how embarrassed I am of this club. We’ve just lost to the San Marino of European football."

Another fan states that this is 'possibly the worst performance, in the club's history.'

As well as Spurs fans, rival fans and social media pages have their say. Rather than just directly bantering them, others have just chosen to remind Tottenham who they have just lost to and how shocking this result

Matchday365 twitter account continues the trend and basically states the fact of it being NS Mura's first ever point in European competition.

So let's have a look at the late goal that has sparked this reaction and has sent the Tottenham fanbase into hiding.

As we go into the final matches of the European competitions, Tottenham have a challenge on their hands that they weren't expecting. Well.. then again, it is Tottenham we are talking about here.

What the papers sayTottenham’s Dele Alli is being watched closely by a number of Premier League teams, according to the Daily Mail. Brighton are reportedly joining Newcastle Burnley and Everton in the chase to sign the 25-year-old midfielder. And the Daily Echo adds that Southampton have expressed an interest too.The Mail also reports Newcastle have made an offer of roughly £30million for Lyon midfielder Bruno Guimaraes. The 24-year-old has been targeted by Arsenal and Juventus, but is yet to see offers from those clubs. The Magpies’ offer would make him their second-most expensive signing if successful.Tottenham have had a...
PREMIER LEAGUE・1 DAY AGO
LFCTransferRoom

After Tottenham were reported to have bid €45million plus add ons for Porto and Colombian winger Luis Diaz on Tuesday, another report has emerged providing an update on the North London club's stance on further bids and the players thoughts on the potential move. The 25 year old has...
PREMIER LEAGUE・1 DAY AGO
LFCTransferRoom

Crystal Palace fans react to their 3-1 loss to Liverpool, with a few sprinkles of salt following Diogo Jota's controversial penalty given by Kevin Friend. Crystal Palace fans are sprinkling more salt than Salt-Bae, despite the penalty not being the winning goal. Not all fans take to social media to...
PREMIER LEAGUE・2 DAYS AGO
LFCTransferRoom

It is no secret that Liverpool are planning on serious changes to their squad in the upcoming summer transfer window. With many players rapidly aging or not signing new deals, Liverpool should have several new faces by the start of next season. Ian Doyle of the Liverpool ECHO says this...
PREMIER LEAGUE・1 DAY AGO

Breaking: Naby Keita Heading Back To Liverpool After Guinea Lose To Gambia In AFCON Round Of 16

Naby Keita's Guinea are out of the Africa Cup of Nations after losing 1-0 to Gambia in a round of 16 match on Monday in Cameroon, a match the Liverpool midfielder missed through suspension. A goal in the 71st minute from Bologna's Musa Barrow was enough to secure Gambia's path...
SOCCER・2 DAYS AGO
LFCTransferRoom

Exclusive: ‘I Don’t Understand Why They Are Not Sorting It’ - Jose Enrique on Mohamed Salah’s Liverpool Contract Situation

Former Liverpool left-back Jose Enrique has spoken about the current contract situation between Mohamed Salah and FSG. Liverpool fans have been begging FSG and the Anfield hierarchy to give Mohamed Salah a new contract. However, it's not just the fans who want the Egyptian tied down to a new deal....
PREMIER LEAGUE・2 DAYS AGO
StyleCaster

As one of the best soccer players in the world, it only makes sense that Neymar’s net worth reflects his status in the game. Today, the professional footballer’s salary puts him among the highest-paid athletes around the globe—but how much is Neymar worth, exactly? Neymar, whose full name is Neymar da Silva Santos Junior, was born on February 5, 1992, in Mogi das Cruzes, Brazil. His father, Neymar Santos Sr., is a former footballer himself who quickly became his son’s mentor after witnessing his budding potential for the sport. From a young age, Neymar Jr. was coached in soccer. At the...
FIFA・1 DAY AGO
The Independent

What the papers sayThe Daily Mail says Newcastle are chasing the signature of Brighton midfielder Yves Bissouma. It is believed Brighton would part ways with the 25-year-old Mali international for £50m, which would shatter Newcastle’s club-record transfer fee by £10m.Liverpool defender Joe Gomez is reportedly on the radar of Steven Gerrard and Aston Villa. According to The Sun, the 24-year-old England international centre-back is thought to have been on Gerrard’s wishlist for a while, with a possible January move on the cards.The London Evening Standard reports Arsenal are considering a move for Real Sociedad forward Alexander Isak, as their hopes...
PREMIER LEAGUE・2 DAYS AGO

Liverpool's squad may look very different for their next Premier League clash against Leicester City at Anfield on Thursday, 10th February and we explore why. It has been a busy and frenetic period for Jurgen Klopp and his team over recent weeks but for many they now have a chance to get some much needed rest until they play the FA Cup fourth round tie against Cardiff City on Sunday, 6th February.
PREMIER LEAGUE・2 DAYS AGO
LFCTransferRoom

No Gomez: Joe, is it time to go? Is it time for the defender to leave Liverpool?

History, again, repeated itself five years later as the Englishman suffered yet another blow to the knee on international duty that ruled him out for the rest of Liverpool’s freak 2020/21 season. At only 24, Gomez has the potential to become a word class centre back and reignite his...
PREMIER LEAGUE・1 DAY AGO
Tribal Football

Manchester United star Bruno Fernandes has admitted he would love to replay last season's Europa League final against Villarreal. Backed as heavy favourites prior to kick-off, United went down on penalties against Unai Emery's side. When asked the one match he could replay since joining United, Fernandes said: "Probably the...
PREMIER LEAGUE・2 DAYS AGO
The Independent

Wolves have turned Hwang Hee-chan’s loan from RB Leipzig into a permanent deal.Hwang moved to Molineux in the summer, with Wanderers having the option to buy the South Korea international.The Premier League club have activated that clause in the agreement and the 26-year-old will sign a deal until 2026 at the end of this season.“With every new signing you have to expect a period of settling in and adapting to their new environment, but straight away, Hee Chan has shown exactly what we expected of him as a player, but he’s also settled in quickly and made an impact,” Wolves’...
PREMIER LEAGUE・23 HOURS AGO

Christian Eriksen has further stepped up his recovery from his cardiac arrest by training with former club Ajax.Eriksen, who has been linked with a return to the Premier League with Brentford revealed earlier this month that he “died for five minutes” when he collapsed during the Euro 2020 group match against Finland in June.The 29-year-old received life-saving treatment on the pitch before being taken to hospital and was fitted with an implantable cardioverter defibrillator (ICD) device.He left Inter Milan by mutual consent before Christmas after rules in Italy prevented him from playing with an ICD and has been training with...
PREMIER LEAGUE・1 DAY AGO
LFCTransferRoom

Exclusive: 'I Think He Will Become a Liverpool Manager One Day' - Jose Enrique on Aston Villa Manager Steven Gerrard

In an exclusive interview, Jose Enrique has given his thoughts on former Liverpool player and current Aston Villa manager Steven Gerrard. Steven Gerrard seems to be destined to manage Liverpool one day but until then he's in Birmingham and the Aston Villa fans love him. Gerrard has brought in some...
PREMIER LEAGUE・2 DAYS AGO
LFCTransferRoom

Liverpool's Mohamed Salah is the hero of Egypt once again after scoring the decisive penalty against Ivory Coast to send the Pharaohs through to the quarter-finals of AFCON. Mohamed Salah has done it for his home country once again. If sending them to the World Cup in 2018 wasn't enough, he's now secured their place in the quarter-finals of this years AFCON.
PREMIER LEAGUE・18 HOURS AGO
The Independent

Jesse Lingard's proposed loan move to Newcastle United is on the verge of collapsing following an impasse in negotiations with Manchester United.The two clubs are understood to have failed to reach an agreement over a loan fee for Lingard, who is eager to secure a move away from Old Trafford this month.The 29-year-old's United contract is set to expire at the end of the season and he has seen his first-team opportunities limited under interim manager Ralf Rangnick.Relegation-threatened Newcastle saw an initial bid for Lingard rejected last week and, despite talks continuing, have failed to settle on a fee with...
PREMIER LEAGUE・1 DAY AGO
LFCTransferRoom

Diogo Jota has been in brilliant form for Liverpool this season, building on an impressive first campaign at the club, but in a recent interview he gave an insight as to how his role has changed through the years. Diogo Jota. Age: 25. Club: Liverpool. Position: Striker. Appearances this season:...
PREMIER LEAGUE・1 DAY AGO
The Independent

Claudio Ranieri has been sacked by Watford after less than four months in charge, the Premier League club has confirmed. Watford’s 3-0 home loss to Norwich on Friday was the club’s 10th defeat in 13 Premier League games under Ranieri and it deepened their relegation concerns. It dropped Watford into the bottom three for the first time this season after an alarming run of form which has seen the club pick up just seven points since Ranieri was appointed on 4 October. With a two-week break until their next fixture, which is another crucial relegation six-pointer against bottom-side Burnley on...
PREMIER LEAGUE・2 DAYS AGO
LFCTransferRoom

Liverpool target Jarrod Bowen has been subject to praise by former England international and West Ham coach Stuart Pearce. According to Football Insider, Liverpool scouted Bowen – not for the first time – earlier this month. He scored both of West Ham’s goals as they beat Norwich 2-0 in the Premier League.
PREMIER LEAGUE・1 DAY AGO
The Independent

Former England boss Roy Hodgson feels ready for the massive challenge of keeping Watford in the Premier League.Hodgson was announced as the club’s new manager on Tuesday evening following the departure of Claudio Ranieri after only 16 weeks in charge.The 74-year-old will be joined at Vicarage Road by assistant Ray Lewington, who managed the Hornets from 2002 until 2005.Hodgson becomes the Hornets’ 15th permanent manager in the last 10 years, and the third boss this season after Xisco Munoz was dismissed in October.Having left Crystal Palace at the end of last season after another campaign safely in the top flight,...
PREMIER LEAGUE・22 HOURS AGO