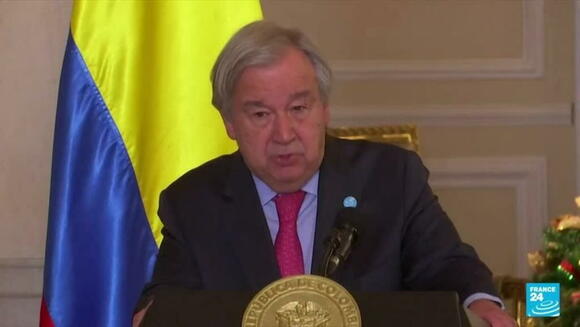 Ethiopia ’s government is aiming sharp criticism at the US State Department as it seeks to maintain order in the face of a nearing rebel army that threatens to totally overwhelm its forces and unseat its leaders.

Reuters reported that Ethiopian officials accused the US of spreading “fake news” after the US Embassy in Addis Ababa issued a warning to US citizens in the country warning of the potential for terrorist attacks in open public spaces.

State minister Kebede Dessisa issued a statement accusing the State Department of being the source of "shameful fake news and defamation regarding Ethiopia”, according to the news wire.

His remarks come as protests continue in the capital against western intervention and the narrative surrounding Ethiopia’s civil war portrayed in western media. The country’s government has increasingly accused the US and other world powers of interference as an army from the Tigray region closes in on Addis Ababa.

The State Department as a whole was also urging US citizens to evacuate the country, while warning that US forces would not undertake a similar evacuation effort as was seen in Kabul as Taliban forces overwhelmed and ousted the former Afghan government.

“[W]e’re urging US citizens to leave Ethiopia now while commercial flight options are available,” a senior State Department official said on a briefing call with reporters on Monday.

“Our core message is: Do not wait until the situation gets worse to decide to leave; leave before things change,” they added.

NPR reported in early November that a number of rebel groups had recently formed an alliance as they neared the capital. Meanwhile, Eritrean forces allied with Ethiopia’s embattled prime minister have allegedly committed massacres in Tigray areas in the country’s northernmost region, which borders Eritrea.

An internal US government report obtained by The New York Times in February accused forces allied with Ethiopia’s government of committing a campaign of ethnic cleansing in the country’s northern regions.

You see all countries know of America’s fake news . All American news stations need to change there names from news networks to propaganda networks

USA is #1 on spreading Fake News.we can thank Trump for pointing that out....if it wasn't for him everyone would believe CNN and MSNBC and other liberal networks.

WASHINGTON – The White House said Tuesday that the British man who held hostages at a Colleyville synagogue entered the United States without trouble because U.S. terrorism databases had no red flag, even though he’d been investigated by Britain’s MI5 security service as a potential terrorist. Hostage-taker...
COLLEYVILLE, TX・1 DAY AGO
The Independent

North Korea on Friday berated the Biden administration for imposing fresh sanctions against the country over its latest missile tests and warned of stronger and more explicit action if Washington maintains its “confrontational stance.”In a statement carried by North Korea’s official Korean Central News Agency, an unidentified Foreign Ministry spokesperson defended the North’s recent launches of purported hypersonic missiles as a righteous exercise of self-defense. The spokesperson said the new sanctions underscore hostile U.S. intent aimed at “isolating and stifling” the North despite Washington’s repeated calls for Pyongyang to resume diplomacy that has stalled over disagreements about sanctions relief...
FOREIGN POLICY・6 DAYS AGO
americanmilitarynews.com

US warns Tehran of ‘severe consequences’ of any attacks on Americans

This article was originally published by Radio Free Europe/Radio Liberty and is reprinted with permission. The United States has warned Iran that it will face “severe consequences” if it attacks any U.S. citizen after Tehran sanctioned 51 U.S. nationals for their alleged role in the death of a powerful Iranian commander two years ago.
U.S. POLITICS・8 DAYS AGO
Newsweek

Emmanuel Macron Warns to Be Wary of Fake News, Considers Sanctions for Those Who Spread It

Washington is willing, however, to compromise on military exercises in Europe. US Deputy Secretary of State Wendy Sherman has told reporters that Russia's proposed limit on the expansion of NATO further into Eastern Europe is a ?non-starter.? However, she said that progress in talks with Moscow is possible. Sherman on...
MILITARY・9 DAYS AGO
The Independent

Tens of thousands of people could die if Russia launches into an “extraordinarily stupid” conflict with Ukraine a minister has warned.Armed Forces minister James Heappey said there is a “grave possibility” that Russia may launch military action, as a hastily-arranged meeting between the US and Moscow is due this week in a bid to defuse tensions.Mr Heappey said it is not “remotely realistic” that British troops would engage in combat with the Russian military, but he added the Ukrainians are “ready to fight for every inch of their country”.Ukraine highly appreciates Britain’s decision to provide a new security package...
MILITARY・22 HOURS AGO
International Business Times

US Warns Russia Poised To Attack Ukraine 'At Any Point'

The United States raised the alarm Tuesday on a potentially imminent Russian attack against Ukraine, ahead of a whirlwind diplomatic mission by Secretary of State Antony Blinken. With tens of thousands of Russian troops already massed on Ukraine's borders, Blinken flew to meet with the Ukrainians and European allies, ahead...
U.S. POLITICS・1 DAY AGO
The Independent

Blinken in Ukraine as tensions with Russia soar

U.S. Secretary of State Antony Blinken will meet with his Russian counterpart in Switzerland this week as tensions between the U.S. and Russia escalate over a possible Russian invasion of Ukraine, the State Department said.Blinken arrived in Kyiv on Wednesday to meet with President Volodymyr Zelenskyy, will move on to Berlin to meet with allies, and on Friday will meet Russian Foreign Minister Sergey Lavrov in Geneva. The hastily arranged trip aims to show U.S. support for Ukraine and impress on Russia the need for de-escalation. White House press secretary Jen Psaki underscored the urgency. “We’re now at a...
U.S. POLITICS・1 DAY AGO

Joe Biden sends its nuclear submarine to Taiwan with several nuclear warheads as its rift with China widens. The US Navy is trying to bolster the president's image after a loss in Afghanistan. The submarine went to a Pacific base in Guam during the weekend by the USS Nevada. Activity...
MILITARY・1 DAY AGO
Newsweek

Russia Tells U.S. To Not Arm Ukraine As It Assembles Nearly 130k Troops at Border

WASHINGTON, Jan 19 (Reuters) - The White House told the U.S. chip industry to be prepared for new restrictions on exports to Russia if Moscow attacks Ukraine, sources said, including potentially blocking the country's access to global electronic supplies. The warning followed inquiries by the industry after reports by Reuters...
FOREIGN POLICY・11 HOURS AGO
AFP

The Taliban's prime minister called Wednesday on Muslim nations to be the first to officially recognise their government, as aid-dependent Afghanistan faces economic collapse. No country has yet recognised the Taliban, with most watching to see how the hardline Islamists -â notorious for human rights abuses during their first stint in power -â restrict freedoms. Although the group has promised a softer rule in line with their interpretation of Islamic Sharia law, women are largely excluded from government employment and secondary schools for girls are mostly shuttered. "I call on Muslim countries to take the lead and recognise us officially. Then I hope we will be able to develop quickly," Mohammad Hassan Akhund told a conference in Kabul called to address the country's massive economic woes.
WORLD・22 HOURS AGO
The Independent

EXPLAINER: What are US military options to help Ukraine?

President Joe Biden is not planning to answer a further Russian invasion of Ukraine by sending combat troops. But he could pursue a range of less dramatic yet still risky military options, including supporting a post-invasion Ukrainian resistance.The rationale for not directly joining a Russia-Ukraine war is simple. The United States has no treaty obligation to Ukraine, and war with Russia would be an enormous gamble, given its potential for expanding in Europe destabilizing the region, and escalating to the frightening point of risking a nuclear exchange.Doing too little has its risks, too. It might suggest an acquiescence...
MILITARY・2 HOURS AGO
AFP

Can the US and Russia find a diplomatic 'off-ramp' on Ukraine?

The United States has called for a diplomatic solution with Russia to resolve a crisis over Ukraine, but in public at least, the two powers remain deeply at odds. Blinken, on a solidarity visit to Kyiv on Wednesday, called on Moscow to choose the "peaceful path" on Ukraine, with a US official saying the talks in Geneva will explore "diplomatic off-ramps" with Russia.
U.S. POLITICS・41 MINUTES AGO
AFP

US Secretary of State Antony Blinken will fly Tuesday to Ukraine in a show of support amid fears of a Russian invasion, the State Department said. Russia last year sent tens of thousands of troops to the borders with Ukraine, according to Western officials who fear a new invasion.
U.S. POLITICS・1 DAY AGO
San Diego Union-Tribune

A year-old report by Washington's Afghanistan watchdog has now been declassified and shows that it warned back in early 2021 that the Afghan air force would collapse without critical U.S. aid and training
AEROSPACE & DEFENSE・2 DAYS AGO
abc17news.com

Macron warns against fake news ahead of French election

PARIS (AP) — French President Emmanuel Macron says people spreading fake news online should be held accountable and possibly brought to justice. The issue is becoming even more significant ahead of the country’s presidential election on April 10. Macron warned against the threat to democracy caused by online misinformation and fake news in a speech Tuesday in Paris. He suggested new laws should allow internet platforms, influencers and more people getting attention online to be held accountable, just like journalists are. Macron’s speech comes after he received a report over the potential consequences of fake news, including last year’s Jan. 6 riot at the U.S. Capitol.
PRESIDENTIAL ELECTION・8 DAYS AGO
WOLF

A Russian state television host threatened on Sunday that the U.S. could be “reduced to radioactive ash” if it does not meet the demands laid out by Russia for deescalating tensions around Ukraine. Russia demanded that the North Atlantic Treaty Organization (NATO) should roll back military deployments in...
MILITARY・28 DAYS AGO
Newsweek

How to Get Free N95 Masks From the Federal Government

The White House says 400 million face coverings will be available under a scheme that begins this week and will be fully operational by February.
U.S. POLITICS・14 HOURS AGO