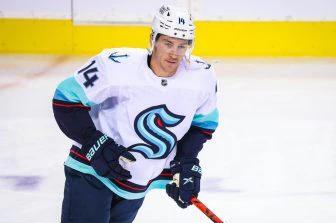 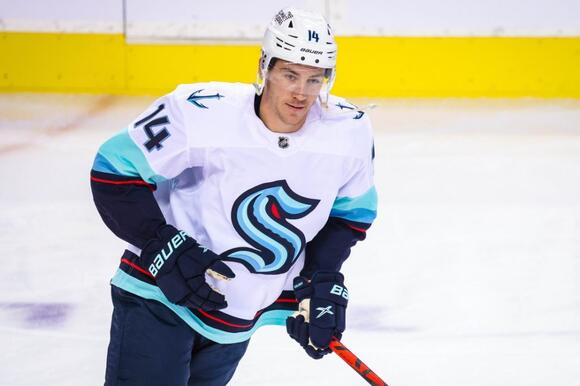 Forward Nathan Bastian is heading back to New Jersey after being claimed off waivers Thursday by the Devils.

He was placed on waivers Wednesday by the Seattle Kraken, who selected him in the expansion draft in July.

Bastian, 23, registered one goal, one assist and 31 penalty minutes in 12 games this season with Seattle. 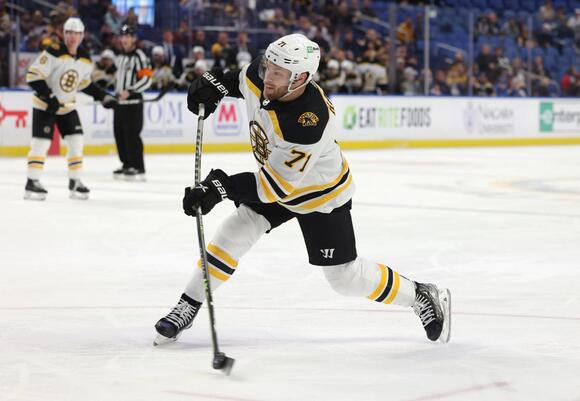 New Jersey drafted the Ontario native in the second round in 2016.

With only eight games remaining between Thursday and the end of February, the Tampa Bay Lightning will look to get
NHL・2 DAYS AGO
HometownLife.com

The New Jersey Devils (15-21-5) are on the road for a meeting with the Tampa Bay Lightning (28-10-5) Thursday. Puck drop at Amalie Arena is set for 7 p.m. ET. Below, we look at the Devils vs. Lightningodds and lines, and make our expert NHL picks, predictions and bets. The...
NHL・1 DAY AGO
FanSided

New Jersey Devils: Where Have the Devils Looked Lost This Year?

This year the Devils have played so poorly, that they look lost in a lot of games. But how many times did they exactly look lost. Throughout almost 40 years of New Jersey Devils hockey, we have seen a lot of competitive, competent, and overall fun hockey. Unfortunately, each season comes with one game where the Devils lack effort and look completely lost. The current season for the Devils has a lot more than just one game like that. While the Devils may be in a rebuild this year, there shouldn’t be an excuse to look lost out there and play with as little effort as possible. How many games have the Devils played like this, you ask? There is undoubtedly a lot, but some games showcase how big of a problem it can be.
NHL・1 DAY AGO

Well, New Jersey Devils fans, this stinks. The team stinks and everything about this season has been pretty negative. Tuesday night’s attendance numbers came in at 10,382 people which is just under 63 percent full. And that number seems generous. Nobody wants to go watch this team play hockey and certainly not spend their hard earned money on it. People did not even want to buy the six dollar tickets going on Stubhub. Anyway, there is nothing worth talking about with this team currently, So, let’s go back to the Pucks and Pitchforks staff preseason predictions. We are only going to break down mine.
NHL・2 DAYS AGO
allaboutthejersey.com

The New Jersey Devils have had a rocky first half of the 2021-22 season, to say the least. Through their first 41 games, the club is 15-21-5 for 35 points. While some feel the season is a wash as they are 16 points out of the second wild-card spot, anything can happen during these unpredictable times. They have been plagued with injuries, COVID, and non-COVID-related illnesses, but seem to be getting close to 100 percent. Some players have stepped up to the challenge and some haven’t – let’s roll into the 2021-22 Devils’ midseason awards.
NHL・1 DAY AGO
FanSided

New Jersey Devils Schedule Update: What Does It Mean?

The New Jersey Devils have been disappointing in their most recent stretch of games. The Boston Bruins and Washington Capitals have seemingly already secured the two Eastern Conference Wild Card spots. It looks like Devils fans will most likely have to look forward to the draft once again this upcoming summer. All that aside, New Jersey, like many other teams, had a handful of games postponed due to COVID outbreaks leaving a lot of makeups to be played.
NHL・54 MINUTES AGO

From the quiet to the noise — that’s how it’s going to be for the Carolina Hurricanes as they head
NHL・13 HOURS AGO
hockeyinsiders.net

The Boston Bruins and Colorado Avalanche played a very eventful game last night. The Avs came out to a 1-0 lead during the first period and the B's followed that up with 3 straight goals in the second period, however the Avs tired it up in the third and eventually won the game overtime.
NHL・2 DAYS AGO
theScore

Colorado Avalanche star Nathan MacKinnon won't return to Wednesday's contest against the Boston Bruins after colliding with forward Taylor Hall during the opening period, the team announced. Hall knocked the shaft of MacKinnon's stick with his shoulder as the center tried to exit the zone, hitting him in the face...
NHL・2 DAYS AGO
WGR550

Many of the Sens described the hit as a cheap shot and the NHL felt that Batherson was not eligible to be body checked. In addition, it was a high shoulder check that caused Batherson to fall dangerously and with force into the back wall.
NHL・2 DAYS AGO

The NHL season officially started back on October 12. In this article, we track all the NHL games today as
NFL・2 HOURS AGO
iheart.com

Ronnie & TKras w/ Zac Blobner This Morning: The Bucs have a lot on their plate to deal with, despite being out of the NFL Playoffs after losing to the Rams last Sunday. From Tom Brady on Instagram saying "Thank You", to OC Byron Leftwich unofficially heading to Jacksonville to coach the Jags, to Antonio Brown going on HBO and threatening to sue the team... it's, A LOT. Bucs Radio Voice Dave Moore & Pewter Report's Jon Ledyard help us break it all down, oh AND Saints HC Sean Payton stepping away from New Orleans in there too. Plus, the Bolts back home vs the Devils tomorrow, as Bally Sports Lightning TV Voice Dave Randorf calls the show w/ a bone to pick about Jon Cooper getting shafted by the NHL. Zac handles What's Up Tampa Bay w/ Wacky Turtle News & a game of Would You Rather on the MLB Hall of Fame ONLY inducting Red Sox Legend David Ortiz while shelving Barry Bonds' chances for the final time...
NFL・2 DAYS AGO
Sportsnaut

While the Edmonton Oilers always would prefer the security that comes from an early lead, falling behind will not deter
NHL・2 DAYS AGO

New York-based mobile lottery provider Jackpocket has struck a deal with the New Jersey Devils to serve as their official lottery courier partner. "New Jerseyans, and specifically Devils fans, are more likely to play the lottery than many across the country,” said Jackpocket CEO Peter Sullivan. “Jackpocket is proud to partner with the Devils to bring this dedicated fan base a simple, fun way to play the lottery. We are excited to introduce new in-game activities and experiences to this fan base throughout the coming years."
NHL・1 DAY AGO
Sportsnaut

Win big. Lose big. The Calgary Flames are in the midst of an all-or-nothing trend as they prepare to play
NHL・14 HOURS AGO
Sportsnaut

The Pittsburgh Penguins and forward Jeff Carter reached agreement Wednesday on a two-year extension worth $6.25 million. The deal begins
NHL・2 DAYS AGO