Kevin Durant on Passing Allen Iverson on Scoring List: 'It Means the World' 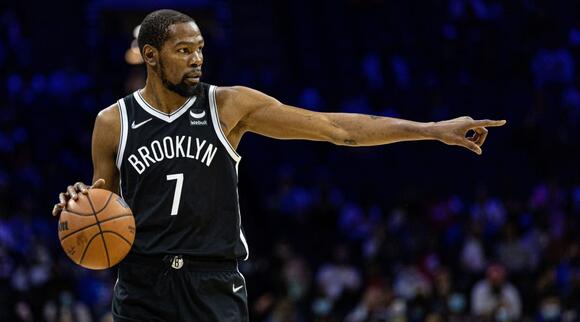 Durant passed Iverson to enter the NBA's Top 25 in scoring on Wednesday night.

Former NBA superstar Allen Iverson is one of the most gifted scorers the league has seen, and a favorite of other basketball players. Kevin Durant lists himself among the many AI admirers and opened up about it after passing the 76ers great on the NBA's all-time scoring list during the Nets' Wednesday night win over the Celtics.

That final basket also moved him into the No. 25 spot in the league's all-time scoring list. He reached the mark in 12 fewer games than Iverson.

"I mean, it means the world. I dedicated my life to this game at an early age ... so I watched all these guys that I'm like passing up," Durant said after the game, per ESPN .

"I wanted to be like them. I wanted to be in the NBA like them, and make an impact in the league like them. So Iverson, he was the pantheon for me. One of those guys that I emulated every time I went outside and played with my friends," Durant continued. "It's all surreal. I pictured I would be in the league, and had an idea . . . but to do it is pretty special."

Durant, a Washington D.C.-area native, first started watching Iverson during his college career at nearby Georgetown.

"I really became a huge Iverson fan, obviously, just like everybody else his rookie year. But seeing him at Georgetown and playing for coach [John] Thompson and that whole culture that they built there, he was a huge part of that," Durant added. "But once he came to the league, he had players . . . I was a center, power forward on my young team, and we all were long crossing and double-crossing. He influenced a lot of people.

"So to pass him on the list and to be up there with some of the greats on that list is incredible. I've just got to keep going."

Durant has plenty of other greats in his sights.

Next up is Ray Allen, whom Durant trails by 136 total points. If Durant maintains his 28.1 points per game average this season, he could score another 1,770 points this season (without accounting for potential injury or load management throughout the season). That total would vault him into 18th place and ahead of fellow forward Kevin Garnett.

Durant and the Nets are back in action on Saturday night,at home against the Suns.

These are the 2022 NBA All-Star starters

The 2022 NBA All-Star Game is coming to Cleveland, and it will again feature the biggest stars in professional basketball. The starting lineups and captains for the game were revealed during an NBA on TNT broadcast, and some familiar faces will again be front and center when the All-Star Game tips off on Sunday, Feb. 20 at Rocket Mortgage FieldHouse.
NBA・1 DAY AGO
Sports Illustrated

Kevin Durant, Giannis Antetokounmpo and Joel Embiid are shoo-ins, but which other stars should land on the East roster?
NBA・2 DAYS AGO
Hypebae

Packer and Reebok are dropping a special “Ultramarine” edition of the Answer IV dedicated to former NBA basketball player Allen Iverson‘s stylistic prime. The new iteration of the silhouette features a gray mesh upper intertwined with classic navy leather. The lining of the tongue tab comes with Reebok branding, while a douse of white is splashed on the laces and the midsole. A zipper runs across the vamp with a pop of red, while the same shade makes an appearance on a circular logo donning the back of the outsole. In addition to the sneaker, a limited-edition T-shirt created in collaboration with Full Court Press will launch alongside the shoe. The garment is printed with a blue graphic of Iverson and the phrase “THE QUESTION HAS BEEN ANSWERED.”
BEAUTY & FASHION・10 DAYS AGO
HoopsHype

James Harden out against Denver with hamstring injury

Chris Haynes: Brooklyn Nets star James Harden (hamstring) is out tonight against the Denver Nuggets, team says. “I think we’re all hopeful he’ll play next game. It’s day-to-day, and we’ll see, but I think it’s likely and probable and we’re all very hopeful that he’ll be ready to go [next game].”
NBA・2 DAYS AGO

The 57th season in the NBA featured a lot of highs and lows. It was Michael Jordan’s final season in the league for good. It was also the first time since the 1999-2000 season that the Lakers did not appear in the NBA Finals. By the end of the season, the San Antonio Spurs and Gregg Popovich would begin what is a historic run by the franchise.
NBA・1 DAY AGO
Sports Illustrated

The Warriors forward received a surprising starting nod, but whose spot did he take?
NBA・16 HOURS AGO
charlottenews.net

Moments after the most prolific 3-point shooter in NBA history left a meeting Tuesday night to get a jersey of his to give to the Pac-12’s leading scorer, that freshman barely could contain her mix of gratitude and joy. “Now my life’s complete,” Cal’s Jayda Curry said....
NBA・2 DAYS AGO

On the anniversary of Kobe Bryant's death, here’s a look how the NBA legend invested the money that he earned on and off the court
NBA・2 DAYS AGO
Page Six

Lamar Odom is honoring late friend and teammate Kobe Bryant on the second anniversary of his death. The former Laker showed off a custom pendant necklace made by Scoobie da Jeweler depicting the late NBA legend and his daughter, Gianna, who were among the nine people killed in a fatal helicopter crash on January 26, 2020.
NBA・2 DAYS AGO
Insider

Austin Reaves looked confused, and perhaps frustrated, as he tried to follow LeBron James' instructions during Tuesday's win over the Nets.
NBA・2 DAYS AGO
fox8live.com

(WVUE) - Ex-NBA player Kwame Brown was appalled with Dwayne Wade’s daughter’s tribute to the late Kobe Bryant. He said that the #8 jersey that she wore was ‘disrespectful’ to the Lakers legend. 14-year-old Zaya Wade paid tribute to Kobe Bryant in an Instagram post on...
NBA・1 DAY AGO

Kareem Abdul-Jabbar addressed comments by fellow Hall of Famer John Stockton after Gonzaga took away his season tickets over refusal to wear mask.
NBA・2 DAYS AGO
The Spun

Nets Have Reportedly Made Decision On James Harden

There’s been a lot of talk this week about James Harden’s future in Brooklyn, with many speculating that the All-Star guard will end up in Philadelphia this offseason. Harden is rumored to be unhappy in Brooklyn, with his eyes potentially on a new team heading into the summer.
NBA・2 DAYS AGO
Black Enterprise

In what is being billed as a first, an active NBA player will also double as a commentator and content provider when not performing his regular job duties on the basketball court. WarnerMedia announced that Golden State Warriors forward Draymond Green is joining the on-air staff of Turner Sports, TNT,...
NBA・19 HOURS AGO
hypebeast.com

Los Angeles Lakers powerhouse LeBron James has officially is returning to his home state of Ohio for the 2022 NBA All-Star games. This year’s selection marks the 18th consecutive year that James has been chosen to be an All-Star starter. He also ties Kobe Bryant for being selected second-most in the history of the league. The two are one behind Kareem Abdul-Jabbar who is a 19-time All-Star starter.
NBA・1 DAY AGO

It’s not often that the NBA and NFL storylines cross over into the other’s lane. According to Pro Football Talk, an NBA star prevented the Cowboys from getting Sean Payton.
NBA・2 DAYS AGO
fadeawayworld.net

Kyle Kuzma is one of the NBA's most interesting personalities, Kuz's outfits and his outspoken confidence often draw the eye. Since his trade to the Washington Wizards, Kuzma's game has gone up a level and he is averaging over 15 points and nearly 10 rebounds per game. Now Kuzma is also receiving praise off the court for his recent gesture for his mother.
NBA・2 DAYS AGO
fadeawayworld.net

During his illustrious career, Michael Jordan played with a lot of amazing players. Among them, his trio with Scottie Pippen and Dennis Rodman was without a doubt the most iconic. The three superstars won three consecutive NBA Championships during the 1990s. While MJ was the leader and the primary superstar...
NBA・22 HOURS AGO
NBC Sports

Amid a sluggish stretch in which Steph Curry is slumping, Jordan Poole is adjusting, and Klay Thompson still is finding his sea legs, the Warriors might have found the key to unlocking their offensive identity. On Tuesday, during their 130-92 thrashing of the Dallas Mavericks at Chase Center, the Warriors...
NBA・2 DAYS AGO