Woman, 32, gives birth to surprise baby five weeks after boyfriend bought her a pregnancy test 'as a joke' because she had 'put on a bit of weight'

A woman has revealed how she learned she was 33 weeks pregnant after her boyfriend got her a pregnancy test 'as a joke' after noticing she had put on 'a bit of weight.'

Kirsty Pearce, 32, from Lowestoft, noticed she had put on weight at the start of October, with her boyfriend Matt Sylvester, 40, jokingly buying her a test.

However the couple were left shocked when the results came back positive, with doctors confirming she was 33 weeks pregnant.

She gave birth to baby Jake Pearce Sylvester weeks later, with Matt telling Lowestoft Journal: 'At first, we were a bit shocked to be honest because we were not expecting a baby.'

Matt revealed how they began noticing Kirsty had put on 'a bit of weight' at the start of October.

He said the family began joking with her that she should take a pregnancy test, even nudging her into doing one.

However they were all left shocked when the tests came back positive, and rushed to the hospital for a scan.

It was then that they learned Kirsty was actually 33 weeks pregnant, and they had mere weeks to prepare for their new baby. 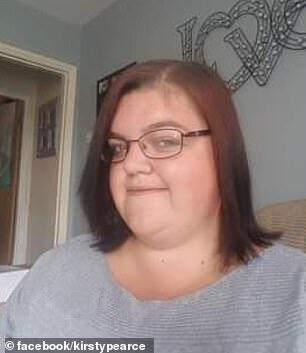 At the beginning of November, Kirsty's waters broke, and just two hours later, she gave birth to their son Jake.

The couple, who already have a daughter, Jessica Pearce Sylvester, nine, welcomed son Jake on November 8 at 8.37am at James Paget University Hospital, Gorleston.

Matt said: 'Most of our friends and family thought we were just joking around with them and a lot didn't believe us until Jake was born. 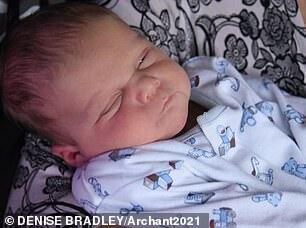 'We had five weeks to sort everything out which was a bit of a rush but we got there eventually.'

He described how Jake is 'slowly adjusting' to home life and 'getting into' a routine.

Meanwhile he said the couple are 'looking forward to raising him'.

One in 450 pregnant women in the UK don't know they are going to have a baby until week 20 of their pregnancy (half-way through), and one in 2,500 women are oblivious to the fact until they go into labour.

It's a phenomenon known as cryptic pregnancy - also referred to as 'pregnancy denial'.

Cryptic pregnancies typically affect either young women, who have never experienced a pregnancy, or women who believe they've gone through the menopause and who choose not to use contraception.

Women with erratic menstrual cycles are also more likely to miss signs they are expecting. This is especially true among women with polycystic ovary syndrome (PCOS), where small cysts grow on the ovaries; the hormone imbalance often leads to irregular or non-existent periods.

Yet there are some women who will continue to have monthly bleeds throughout their pregnancy. In this case, a scan at the local GP may be the only method of confirmation.

Women may simply not expect to find they are pregnant if they are taking the Pill - but then those taking it religiously can still become pregnant.

Eight in 100 women can get pregnant while on the Pill - usually not because of problems with the Pill, but with the taker, either because they've missed the Pill, thrown up or had diarrhoea.

I get really bad morning sickness by 5 weeks. all 3 kids are 10 years apart, last pregnancy I had NO symptoms and craved beer and steak. I didn't find out until 18 weeks. ALL pregnancies are different and some women don't know until they're in labor. crazy, I know but, it happens. God bless the Lil angel 😇

This woman and others mentioned in the article need to pay more attention to their bodies. I find it hard to believe that so many women get that far along in their pregnancies before finding out or realizing that they are pregnant.

people are so mean. just be happy for them instead of making fun of them

The pink lines in COVID-19 rapid tests are giving me infertility PTSD. Turns out I'm not alone.

The author shares how after years of trying to get pregnant, hoping to see two pink lines in tests, at-home COVID-19 tests are giving her PTSD.
WOMEN'S HEALTH・1 DAY AGO
New Scientist

Flu vaccines during pregnancy protect babies for 6 months after birth

Babies are two-thirds less likely to get the flu in their first six months of life if their mother had a flu vaccine while they were pregnant, a large Australian study shows. Influenza can be particularly dangerous to young children because their immune systems are still developing. In the US, 12 children under the age of 6 months died of the flu in the 2019-20 season.
WOMEN'S HEALTH・7 DAYS AGO
Indy100

A mother had divided opinion after revealing that she washes her baby’s reusable nappies once a week. TikTok user @the.clarks, who goes by the name Kelsey, made the remark during a video in which she discussed her laundry process. In the video, she said: “It is that time of...
BEHIND VIRAL VIDEOS・6 DAYS AGO

'Get Out of the Car': Internet Slams Mom for Forcing 30-Week Pregnant Daughter To Walk Home

"So much can go wrong and I couldn't imagine doing something so cruel to my own child," one commenter wrote.
FAMILY RELATIONSHIPS・15 HOURS AGO
MONTCO.Today

Jamie Di Domizio, who was born prematurely at Holy Redeemer Hospital, returned 32 years later to give birth to her son, according to a staff report from www.redeemerhealth.org. Di Domizio was born on October 27, 1989, three months early. She weighed only two pounds eight ounces and was immediately admitted...
MONTGOMERY COUNTY, PA・11 DAYS AGO
ABC 4

Decreasing the Risk of Birth Defects: Five Ways to Have a Healthy Pregnancy

(Good Things Utah) January is birth defects awareness month. Birth defects affect about 1 in 33 babies born in the U.S. each year, according to the CDC. Birth defects usually develop in the first three months of pregnancy and can affect the baby’s organs such as the heart or brain or other body parts while they’re developing and can cause problems in your baby’s overall health, and how their body functions.
WOMEN'S HEALTH・11 DAYS AGO
The Independent

Jessie J has described her miscarriage as the “saddest and loneliest time”, but that she is now in the “happiest place” she’s ever been.The 33-year-old, whose real name is Jessica Cornish, made the comments during a recent set at Lafayette in London, where she has been performing a string of intimate acoustic gigs since December.Cornish first spoke publicly about suffering a miscarriage in November 2021. In a now-deleted post to her Instagram, she shared a photograph of herself holding a positive pregnancy test.The Price Tag singer said she had received the sad news when attending her third scan.Opening up about...
CELEBRITIES・2 DAYS AGO

Approximately 380,000 babies are born premature each year. Johns Hopkins All Children’s Hospital treats about 800+ babies in the neonatal intensive care unit (NICU) each year, many who have a very low birth weight or other medical complexities. Oftentimes moms cannot prevent genetic issues or other potential complications that may lead to treatment for babies in the NICU, but there are some things expectant moms can do to possibly prevent hospitalization at birth. Below are some of the most common questions that experts in the Maternal, Fetal and Neonatal Institute at Johns Hopkins All Children’s Hospital receive from expectant moms.
WOMEN'S HEALTH・15 DAYS AGO
Daily Mail

Mother-of-one, 26, died from complications of £3,000 gastric bypass surgery she had in Turkey in desperate bid to lose weight after giving birth to her first child

A mother-of-one died from complications of £3,000 gastric bypass surgery she had in Turkey, a coroner has ruled. Khelisyah Ashamu, 26, was a Romford IT professional who died in Ekol Hospital, Izmir, on February 9 2019, East London Coroner's court heard. The mother-of-one decided to have the surgery less than one year after giving birth to her son Cairo and he was just 11 months old when she died, the inquest heard.
WEIGHT LOSS・49 MINUTES AGO
Fortune

Never miss a story: Follow your favorite topics and authors to get a personalized email with the journalism that matters most to you. As COVID-19 infections continue to escalate in the new year, some patients have been reporting a strange new symptom: night sweats. Commonly associated with other conditions like...
PUBLIC HEALTH・17 DAYS AGO
houstonianonline.com

While the woman was waiting on the street, her husband photographed everything. The pictures show how the woman bleeds profusely. The video went viral on Chinese social media platform Weibo. The Health Authority launched an investigation into the video and concluded that the infant died of neglect. Two hospital executives...
WORLD・15 DAYS AGO
The Independent

A woman has thanked one of her fellow gym members for not staring at her as she does squats, and she is sparking a debate on social media for doing so.In a TikTok video posted on 1 January, @libbychristensen was squatting on an exercise machine, as a man was sitting on a bench behind her. @libbychristensen ty for your service kind sir #gymtok #girlwholift #YerAWizard ♬ The Golden Girls - The Main Title Theme - TV Themes “I just need to shout out this man who was behind me while it was hack squatting bc I...
WORKOUTS・1 DAY AGO
Popculture

Brittany Daniel, who starred on the hit '90s series Sweet Valley High with her twin sister Cynthia Daniel, welcomed a daughter with her husband Adam Touni in October. Brittany's egg donor was none other than Cynthia, who decided to help her sister start a family after Brittany was diagnosed with stage IV non-Hodgkin's lymphoma and told she might never have children of her own. Cynthia has three children of her own with her husband, Yellowstone star Cole Hauser.
CELEBRITIES・14 DAYS AGO
Radar Online.com

Chris Brown's alleged third baby mama Diamond Brown is back in action after welcoming her first child into the world last week. The Instagram influencer appeared to be in good spirits, despite the singer remaining quiet on whether her baby girl is his. Article continues below advertisement. Diamond shared a...
CELEBRITIES・8 DAYS AGO
BET

Kash Doll is officially a mommy. The Detroit rapper shared an adorable photo of her baby boy, Kashton Prophet Richardson, born on Thursday, January 6th, in Atlanta, Georgia. The proud mama shared a photo along with a caption that read: "Call me crazy but i think i found the love of my life 🌟 ❤️ (I’ve never felt this way before y’all somebody finally have me wrapped around his finger) Kashton Prophet Richardson has stolen my heart ❤."
ATLANTA, GA・10 DAYS AGO
UPI News

Jan. 12 (UPI) -- Jeannie Mai Jenkins, co-host of The Real, and rapper husband Jeezy had their first child together. Jenkins, 42, announced the birth in an Instagram post. She shared a photo of the baby blanket covered in footprints with the nametag "Baby Jenkins." "I asked God for a...
CELEBRITIES・9 DAYS AGO
Business Insider

I'm an ER nurse who's comforted panicked COVID-19 patients as they beg to live. Too often, they die anyway.

"I am urging everyone to put politics aside and come together," Thad Cummings told Insider. COVID-19 has "caused us to lose our humanity."
MUSKEGON, MI・2 DAYS AGO
Newsweek

The woman broke things off after becoming "grossed out" at the idea they were family.
RELATIONSHIP ADVICE・3 DAYS AGO
Newsweek

She said she tried to put his previous inappropriate comments aside but in this moment she "lost it."
RELATIONSHIP ADVICE・19 HOURS AGO