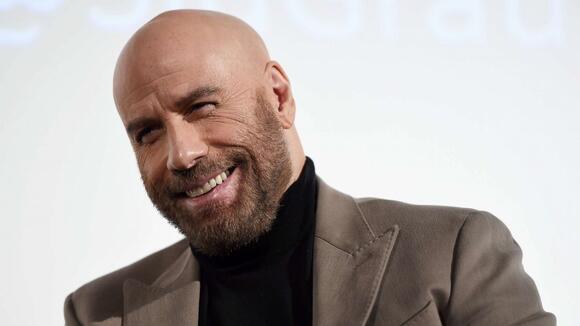 "Happy birthday my beautiful boy. Your dad adores you!" the "Grease" actor, 67, wrote on Instagram Tuesday alongside a photo of himself with Benjamin and Ella, his daughter.

In addition to commenting on her father's post, Ella, 21, also shared an Instagram shout-out in honor of her little brother's special day, writing, "Happy Birthday Benjamin! The sweetest boy I know. You continue to teach me so much and brighten our lives. I love you!"

Benjamin and Ella are just two of the children Travolta shared with his late wife Kelly Preston, who died of breast cancer in July 2020. Their son Jett died in January 2009.

In a recent conversation with Kevin Hart, Travolta opened up about Benjamin grappling with his mother's death.

"He said to me once, 'Because mom passed away, I'm afraid you're going to,'" Travolta recalled. "I said, 'Well, it's a very different thing.' And I went through the differences about my longevity and her limited life."

Travolta then told Benjamin that "nobody knows when they're gonna go or when they're going to stay," referencing how Jett died at 16 and Preston died at 57.

"I could die tomorrow. You could. I mean, anybody can," he continued. "So let's look at life ... it's part of life, you see? You don't know exactly. You just do your best at trying to live the longest you can."

Actor John Travolta rang in the new year with his two children by his side, and he shared the moment on social media. Travolta’s “Grease” co-star Olivia Newton John commented on the photo complimenting daughter Ella’s "gorgeous" dress.Jan. 3, 2022.
CELEBRITIES・13 DAYS AGO
PopCrush

Another Travolta is looking to take over the world! Ella Travolta released her first single on Friday (Dec. 7). On Instagram, the 21-year-old marked the special occasion by sharing an adorable video featuring her very famous pops John Travolta. "So happy and excited to say that my first single, 'Dizzy,'...
CELEBRITIES・9 DAYS AGO
Hello Magazine

Ella Travolta has shown that talent runs right through the Travolta family as on Friday the 21-year-old released her first single. The star shared the news on her Instagram account, where she uploaded a video of herself singing the new song, Dizzy, whilst softly on the piano – and she sounded amazing! The video gave fans a good tour of her home and recording studio as the clip shifted between the two, before ending on a sweet cameo featuring father John Travolta. The actor joined his daughter as he mouthed the lyrics to her song, before giving her a kiss on the cheek.
THEATER & DANCE・9 DAYS AGO
TODAY.com

John Travolta is getting a hand from someone from his past as he looks to the future. His “Grease” co-star Olivia Newton-John shared some kind words after he posted a family photo featuring daughter Ella, 21, and son Benjamin, 11, in honor of New Year’s Day. “Happy...
CELEBRITIES・13 DAYS AGO

John Travolta is notoriously private when it comes to his personal life but gave a rare glimpse into his family life in a new Instagram photo to mark the new year. The Hollywood star posted a lovely picture of himself with his daughter Ella and son Benjamin standing in front of a white Christmas tree.
MUSIC・11 DAYS AGO
E! News

Watch: John Travolta & Olivia Newton-John Reunite at "Grease" Celebration. We've got chills and they're multiplying after listening to Ella Bleu Travolta's new song. On Thursday, Jan. 6, the 21-year-old actor and musician took to Instagram to announce that she had released her first-ever single, "Dizzy." The adorable minute-long video...
CELEBRITIES・9 DAYS AGO
KTVB

Katie Thurston is getting some birthday love! The former Bachelorette's beau, John Hersey, took to Instagram on Monday to mark her 31st birthday with a romantic post. John shared a photo of him and Katie kissing one another on the dance floor. "I could have never dreamt up what this...
SWEET, ID・12 DAYS AGO
The Press

Kate Hudson has celebrated her son Ryder's 18th birthday with a touching social media post. The 42-year-old actress shared a sweet tribute to her son on his milestone birthday with a montage of photos from his life, beginning with a snap from her pregnancy and ending with a recent selfie of the pair and also quipped that his life is "outta my hands" now.
CELEBRITIES・6 DAYS AGO

Kate Hudson is now the proud mama of an adult son. It’s hard to believe, but her oldest child, Ryder Robinson, from her first marriage to Chris Robinson, is officially 18 years old. In honor of his milestone birthday, the actress shared many never-before-seen photos of his life growing up in an emotional video.
FAMILY RELATIONSHIPS・6 DAYS AGO
KTVB

Katy Perry had sweet birthday wishes for the love of her life, Orlando Bloom. On Thursday, the “Firework” songstress celebrated the occasion with an adoring post. “happiest 45th to the kindest, deepest, most soulful, sexy & strong man I know,” she wrote. “thank you for being a constant compass, an unwavering anchor and bringing joi de vivre into every room you walk in. You are the love and light of my life. I thank my lucky stars for you and our darling dd ♥️♠️.”
CELEBRITIES・3 DAYS AGO
Closer Weekly

John Travolta Is Always Gushing About Fatherhood! See the ‘Grease’ Actor’s Best Quotes About Being a Dad

Actor John Travolta starred in countless blockbuster films and became a heartthrob in the ‘70s, but by far, his most rewarding role is being a father. The Grease star and his late wife, Kelly Preston, welcomed three children together: Ella, Benjamin, and late son Jett. Life as a single father has been an adjustment, but John’s bond with his children has only gotten stronger.
FAMILY RELATIONSHIPS・2 DAYS AGO
Popculture

The General's Daughter, a 1999 mystery thriller starring John Travolta, is one of several films leaving Netflix in January. The Paramount Pictures movie explores the impact of a sexual assault case within the U.S. military. Travolta plays Chief Warrant Officer Paul Brenner, who investigates the assault and murder of a general's daughter. It was based on Nelson DeMille's 1992 novel of the same name.
MOVIES・5 DAYS AGO

The Queen has publicly marked the Duchess of Cambridge's milestone 40th birthday with a series of heartwarming photos posted to the royal family's official social media accounts. The pictures shared on Twitter and Instagram showed Kate, who turned 40 on Sunday, smiling with the Queen during different events, including one...
WORLD・7 DAYS AGO
UPI News

Michael B. Jordan is following up on girlfriend Lori Harvey's surprise early birthday party with a short but sweet message! The actor took to Instagram to celebrate Harvey's birthday on Thursday, sharing a beachy video and revealing his adorable nickname for the SKN by LH founder -- turtle!. "Happy B-Day...
CELEBRITIES・2 DAYS AGO
People

The 42-year-old actress celebrated her son Ryder Russell's 18th birthday with a sweet tribute shared on her Instagram Friday in honor of the major milestone. "And then he was 18 ❤️," Hudson wrote alongside a montage of photos with Ryder over the years, beginning with a snap from her pregnancy and ending with a recent selfie together. Hudson shares son Ryder with ex Chris Robinson.
CELEBRITIES・6 DAYS AGO
People

Janet Jackson is sending love to her little boy on his birthday. On Monday, the 55-year-old singer paid tribute to her son Eissa, whom she shares with ex Wissam Al Mana, as he celebrated his 5th birthday. The "Rhythm Nation" artist posted a sweet message to Instagram in honor of...
CELEBRITIES・13 DAYS AGO
iheart.com

Jimmie Allen took to social media to share a birthday message to his wife, Alexis Gale, and it’ll give you all the feels. The “Freedom Was A Highway” singer praised his wife’s patience and love, thanked her for being his rock, and calling it the “most beautiful thing I have ever seen” to watch her with their children. Allen wrote:
CELEBRITIES・9 DAYS AGO
Miami Herald

Celebrating their sweeties! Witney Carson, Erin Napier and more stars have pulled all the stops ringing in their kids’ birthdays in 2022. The Dancing With the Stars pro’s son, Leo, celebrated his 1st birthday on January 4 with a Where the Wild Things Are-themed party. Fellow dancer Lindsay Arnold attended the bash with her daughter, Sage.
CELEBRITIES・3 DAYS AGO
L.A. Weekly

Following the holidays, David Bowie’s birthday is seen as a continuation of celebration and reverence for fans. Los Angeles has been marking the date (Jan. 8) in a big way before and especially since his death in 2016. Of course, with the Omicron variant spreading so rapidly in L.A., outdoor spaces (or venues that have them) seem to be the best bets. Here are two good glam-bams:
LOS ANGELES, CA・12 DAYS AGO