Argentina celebrates Maradona one year after his death 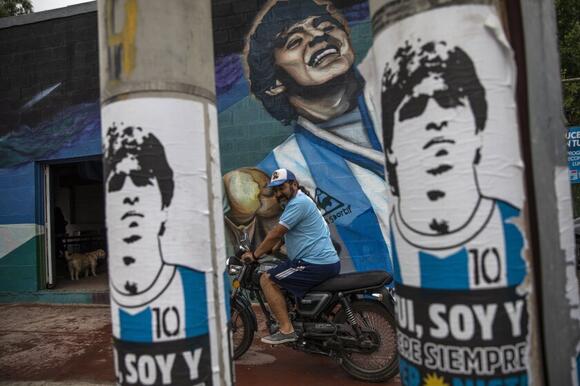 Argentina marked the one-year anniversary of the death of soccer legend Diego Maradona on Thursday with ceremonies, tributes, graffiti murals and emotional messages on social media.

Maradona died of a heart attack at the age of 60 after having brain surgery two weeks earlier. Seven health professionals who tended to the star are facing criminal charges after a medical report said Maradona did not receive adequate treatment.

“The world has been more horrible for a year because you are not here," Maradona's eldest daughter Dalma wrote on Instagram.

“I came so Dieguito said hi to his father,” his mother Verónica Ojeda told journalists.

Argentina's national team also marked the occasion on social media with the message: "It has been one year since you became immortal. We will never forget you."

The country's soccer association said the next round of the domestic championship will take place after players jointly form a number 10 on the pitch before each match.

Fans also gathered for tributes at sites dedicated to the Argentine great.

Derby manager Wayne Rooney is in contention for an emotional return to Everton after the former England star's impressive handling of affairs on the pitch despite a financial crisis at the Championship club. Rooney is among the bookmakers' favourites to take permanent charge at Goodison Park after Rafael Benitez was sacked on Sunday. The 36-year-old made his name at Everton as a precocious teenager before rejoining his boyhood club following a glittering spell at Manchester United. And, in his short time as a manager, Rooney has offered evidence that the potential return of the prodigal son would be more than just an olive branch to Everton supporters infuriated by the dismal reign of the despised Benitez.
PREMIER LEAGUE・2 DAYS AGO
Insider

Ronaldo was dragged off in the 71st minute of Manchester United's 3-1 win over Brentford to be replaced by defender Harry Maguire.
PREMIER LEAGUE・1 DAY AGO
San Diego Union-Tribune

Atlético out of Copa, Sevilla held in Spanish league race

Álvaro Cervera, lauded by fans as the club’s greatest ever manager, has moved on with the club struggling for survival
WORLD・23 HOURS AGO
San Diego Union-Tribune

LaLiga’s two biggest clubs were in the headlines recently as they fought out the first El Clasico of the new year in the Spanish Supercopa - an encounter Real Madrid just about edged, before going on to claim the trophy itself against Athletic Club.Now all three sides are back on our screens on Thursday night as the Copa del Rey takes centre stage, with the round of 16 ties pitting Barcelona against Athletic - a repeat of last season’s final, which Barca won 4-0. The current side looks rather different to the one which took to the field last April...
UEFA・22 HOURS AGO
San Diego Union-Tribune

Real Madrid star Toni Kroos was left stunned and confused when he received a yellow card for a ghost tackle during the club’s Copa del Rey victory over Elche.Kroos went in for a challenge but didn’t connect with the ball or forward Tete Morente but the player threw himself to the floor and referee Jorge Figueroa Vazquez gave a free kick.The former German international protested the call which earned him the yellow card and posted on Twitter afterwards to sum up his displeasure at the decision. Despite the controversial decision, Carlo Ancelotti’s side came from behind to win the last...
SOCCER・5 HOURS AGO
The Independent

What the papers sayArsenal’s pursuit of Dusan Vlahovic has been dealt a blow, with the Daily Mail citing reports in Italy that the 21-year-old Fiorentina striker is only interested in moving to Juventus According to the Italian press, Vlahovic has already agreed terms with Juve.But Mikel Arteta and the Gunners are moving closer to signing Juventus midfielder Arthur Melo, according to The Sun. The newspaper – citing French outlet Get French Football – reports Juventus have begun talks to bring on Lyon player Bruno Guimaraes as a replacement for the 25-year-old Melo. The lack of a replacement has been...
PREMIER LEAGUE・2 DAYS AGO
The Guardian

Who came back? Who fell away? Who changed tracks?
NFL・2 HOURS AGO