BLM Co-Founder on Kyle Rittenhouse’s Claims He Supports the Movement: ‘We See Him on Social Media Throwing Up White Supremacist Signs’ 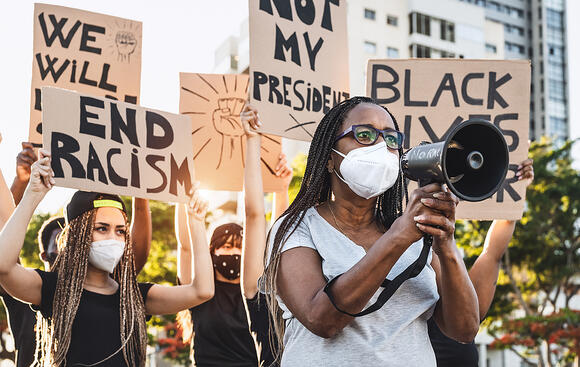 Kyle Rittenhouse was acquitted last week on charges that he murdered two white men and wounded another at the Kenosha, Wisconsin protests last summer.

Since his acquittal, Rittenhouse has already visited former President Donald Trump, who gave him a glowing review, Fox News and several other right-wing outlets and figureheads.

He is has become somewhat of a Republican poster child. Despite being embraced by the right-wing community, Rittenhouse claimed that he supports the Black Lives Matter movement in a recent interview.

The Kenosha protests were in response to a Black man, Jacob Blake, being shot by a white police officer in the back seven times at close range.

One of the Black Lives Matter co-founders took issue with Rittenhouse’s remarks (as many of us did.)

“They’re using tools, they are a propaganda machine that’s used to make the nonsensical seem to make sense,” Melina Abdullah told TMZ. “And so they want to make Kyle Rittenhouse both a young hero of white supremacy but also not be a blatant white supremacist. He’s declaring this support for Black Lives Matter… We see all over his social media him throwing up white supremacist signs and people know what it is.”

“It’s very clear what he is and what he’s doing. Again, they’re trying to make nonsense make sense.”

At the time, Rittenhouse was armed with an AR-style semiautomatic rifle. Prosecutors argued that Rittenhouse, who was just 17 at the time, was a “wannabe soldier” on the hunt for trouble that night. Still, despite being armed with a war-ready rifle, his self-defense argument worked for the jury and he walked away, scot-free.

Rittenhouse appears to be playing both sides of the fence, cozying up to his right-wing supporters while loosely supporting the left.

However, Abdullah made it crystal clear that Black Lives Matter does not need nor want Rittenhouse’s support.

An AR-15 is NOT, and never has been a "war ready rifle".the AR-15 has never been employed as a military weapon in any country in the world. You pseudo intellectuals may want to "fact check" your own false claims.

You’d better check your “facts” again! Everyone and their brother has gone through Kyle’s phone and other electronic devices, drilled down and through his social media and guess what? Not a single instance of racial discrimination or profiling Anywhere! However, they did find support for BLM, it’s just that that doesn’t fit either sides narrative. So BLM keeps spreading the medias lies and people who didn’t bother to do their research or watch the trial cry about the fact based outcome🤨

I you are so worried BLM.about your people. Why aren't you going into the counties where your people are murdering each other. And stop it . Show how much you really care.

Kyle Rittenhouse, who was acquitted last November in the killing of two people and shooting of another in 2020 during riots in Kenosha, Wisconsin, asked the court to return the gun he used in the shootings so he can destroy it. The request was made in a court filing Wednesday...
KENOSHA, WI・4 DAYS AGO
Shine My Crown

A Black woman quit her job after recording two of her colleagues making derogatory remarks about her and Black people in general. Janika Frimpong was working at Legal & General's headquarters in the City of London. She left her phone on record as she left to use the bathroom.
SOCIETY・10 DAYS AGO
Business Insider

Manchin remains peeved over a White House statement that singled him out, The Washington Post reported.
CONGRESS & COURTS・18 HOURS AGO
Daily Mail

'Go back and read what I said': Biden snaps back at reporter who asked him about the president's comparison of political opponents to white supremacist Bull Connor

President Joe Biden snapped at a reporter Wednesday who asked if invoking white supremacists like Bull Connor and George Wallace and saying those who didn't support voting rights legislation were in the 'same camp' as them backfired. 'No I didn't say that. Look what I said. Go back and read...
PRESIDENTIAL ELECTION・6 DAYS AGO

US fugitive wanted by the FBI on rape charges disguised himself as an eccentric English professor, and his neighbors admit they were totally fooled

Nicholas Rossi faked his death and fled to Scotland to evade a rape charge where he hid in plain sight posing as a Panama-hat-wearing academic.
PUBLIC SAFETY・2 DAYS AGO
Business Insider

Romney was critical of the Biden administration for not doing more to create bipartisan support for a bill defending voting rights.
UTAH STATE・8 DAYS AGO
Business Insider

Rudy Giuliani can't hand over documents for Dominion Voting System's $1.3 billion lawsuit against him because they're in the possession of the FBI.
U.S. POLITICS・11 HOURS AGO

"I thank you for fighting for me, and you know who you are," the Fox News personality said during the final episode of "Justice With Judge Jeanine."
TV & VIDEOS・2 DAYS AGO
Business Insider

He said the Capitol riot motivated him to start up his own law firm that represents workers who do not want to get vaccinated against the coronavirus.
PROTESTS・2 DAYS AGO
The Independent

The two sitting Republicans on the 6 January select committee have hit back at former speaker Newt Gingrich for suggesting they could be prosecuted if and when the GOP retakes Congress.Mr Gingrich made his remarks to Fox News’s Maria Bartiromo on Sunday morning, telling the famously pro-Trump host that under a Republican congressional regime, those who have pursued accountability for last year’s Capitol attack should expect rough treatment from the party’s leaders.“All these people who have been so tough and so mean and so nasty,” he said, “are going to be delivered subpoenas for every document, every conversation, every...
CONGRESS & COURTS・1 DAY AGO
Business Insider

During his first months in office, Biden took laudable steps in the right direction on foreign policy, but he appears to have gotten cold feet.
PRESIDENTIAL ELECTION・2 DAYS AGO

"March 1 is not a deadline for one thing or another," he said at a POLITICO event. What happened: Majority Leader Steny Hoyer took a pragmatic tone about the future of the Democrats' climate change and social spending bill during an interview with POLITICO on Tuesday, insisting the March 1 State of the Union address should be viewed as an artificial deadline.
CONGRESS & COURTS・13 HOURS AGO
Variety

Let’s get after it: Even as CNN puts much of its energy into launching a new streaming-video hub, it’s also trying to figure out how to replace Chris Cuomo in its pivotal 9 p.m. time slot. Some staffers at the WarnerMedia network believe CNN has been holding the equivalent of on-air tryouts in recent weeks, turning over the 9 p.m. hour to hosts like Michael Smerconish, Laura Coates and Brianna Keilar. Jim Acosta, the former White House reporter turned weekend anchor, takes a turn this week. Both he and Keilar have held forth under the program banner, “Democracy in Peril,” a...
TV & VIDEOS・14 HOURS AGO
Newsweek

The office for GOP Attorney General Jason Miyares denied suggestions the top lawyer was dismissed from the role over his work on the Capitol attack.
VIRGINIA STATE・1 DAY AGO
USA TODAY

Jan. 6 investigators are turning up the heat on the Trumps. GOP should run.

Even if Donald Trump is banned from running for office again, fight to defend democracy demands more.
POTUS・1 DAY AGO

Civilian control of the military is an essential element of our government, designed to ensure that the military reflects the will of the people. The Founding Fathers, concerned that a strong unitary executive could co-opt the military, divided that control between the executive and legislative branches. That foundation ensures we...
PRESIDENTIAL ELECTION・22 HOURS AGO
Newsweek

Malinowski says they "want me to support Russia's 'reasonable' positions," amid fears that the nation could soon invade Ukraine.
CONGRESS & COURTS・1 DAY AGO
Shine My Crown

'RHOSLC’s Jennie Nguyen Apologies for Racist Posts: 'I Was Speaking Out Against Violence'

"Real Housewives of Salt Lake City" star Jennie Nguyen has apologized for racially-charged and offensive posts that have since resurfaced online. "I want to acknowledge and apologize for my deleted Facebook posts from 2020 that resurfaced today. At the time, I thought I was speaking out against violence, but I have since learned how offensive and hurtful my words were," she said in her written apology.
SALT LAKE CITY, UT・4 DAYS AGO
sjvsun.com

Fresh out of office, Nunes opens up on Trump social media, election to replace him

Former Rep. Devin Nunes (R–Tulare) took to Valley airwaves on Thursday, speaking to KMJ’s Ray Appleton for an hour, his first opportunity since departing Congress to discuss the quick work to launch a social network under the Trump Media banner. For Nunes, the shift into the private sector...
PRESIDENTIAL ELECTION・12 DAYS AGO