Lane Kiffin responds to Nick Saban rant about Alabama football fans: 'This made me smile' 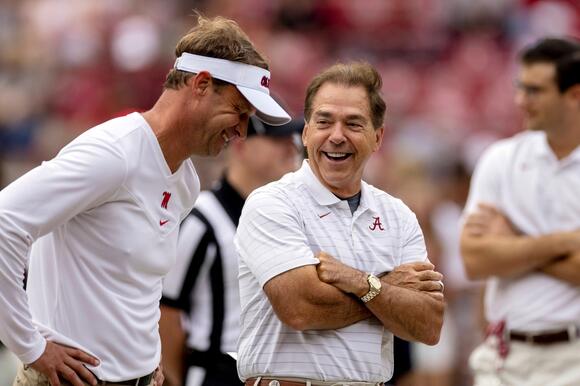 Alabama football head coach Nick Saban went on an epic rant Wednesday night during his radio show aimed at the high expectations and lack of gratitude from some Alabama football fans.

"And nobody feels worse than they do when they lose," Saban continued. "Nobody. So for all you self-absorbed folks out there that can't look past your own self, aight, to appreciate what other people are doing."

Lane Kiffin , the Ole Miss head football coach and former Saban assistant coach, reacted to a video of the rant .

Kiffin tweeted, "Happy thanksgiving Coach!! This made me smile!! Tell them how you really feel. Very grateful for you and Miss Terry."

Kiffin was an Alabama offensive coordinator from 2014-16 under Saban.

This article originally appeared on Mississippi Clarion Ledger: Lane Kiffin responds to Nick Saban rant about Alabama football fans: 'This made me smile'

Here comes Lane Kiffin from the rafters: the Ole Miss football coach has always been eager to troll fans on Twitter whenever a high-profile coaching search kicks off, but he’s usually stuck to inspiring speculation at the college level. But now he’s made the jump to the NFL and shared some photos to get New Orleans Saints fans all discombobulated.
NFL・2 DAYS AGO
FanSided

With the New Orleans Saints job opening up, Ole Miss football coach Lane Kiffin trolled everyone with a potential flight tracker. Sometimes it’s hard to believe that Lane Kiffin was on Nick Saban’s coaching staff with how big of a social media troll he is. The Ole Miss...
NFL・1 DAY AGO
247Sports

Ole Miss head coach Lane Kiffin and his offensive coordinator Charlie Weis Jr. spent most of the day at New Orleans (La.) Isidore Newman, hanging out with head coach Nelson Stewart as they were showing interest in the Top247’s No. 1 2023 recruit in five-star quarterback Arch Manning. This...
NEW ORLEANS, LA・2 DAYS AGO
The Grove Report

Kiffin is swinging through New Orleans on Tuesday on his way back from visiting Jaxson Dart.
NEW ORLEANS, LA・2 DAYS AGO

Ole Miss quarterback Matt Corral and head coach Lane Kiffin have a special bond. No doubt about it. With Corral projected to be drafted in the first round of the 2022 NFL Draft, the quarterback decided to discuss the relationship with Jim Rome on CBS Sports Radio. Keith Farner from...
NFL・2 DAYS AGO
Yardbarker

Arch Manning is the top high school football prospect in the nation right now. Everyone wants to recruit him, with no exceptions. One person who recently opted to jump into the fray: Ole Miss head coach Lane Kiffin. Last week, Kiffin and his offensive coordinator Charlie Weis Jr. visited Manning's...
HIGH SCHOOL・12 HOURS AGO
USA TODAY

Could the rich be getting even richer? On Tuesday, news surfaced that Steelers receiver JuJu Smith-Schuster has shown an interest in signing with the Chiefs this offseason. Per Aaron Wildson of Pro Football Network, “It’s no secret in NFL circles with multiple league sources saying Smith-Schuster hopes to join the Chiefs as a free agent and has expressed that desire.”
NFL・2 DAYS AGO

A stunning development has entered the mix in the Caleb Williams sweepstakes, according to a new report. It was previously believed USC was far and away the favorite to land the former Oklahoma quarterback. Then LSU reportedly entered the fray. Now, it’s a Big Ten team’s turn to try and land the five-star transfer.
COLLEGE SPORTS・2 DAYS AGO
2 News Oklahoma KJRH Tulsa

Chase won a national title with LSU after catching 88 passes for 1,780 yards and 20 touchdowns in 2019.
NFL・1 DAY AGO
Sportsnaut

The 2021 NFL Rookie of the Year candidates are settled. Ja’Marr Chase put past drop issues to bed long ago
NFL・1 DAY AGO

Burrow redshirted at Ohio State and was a backup for two years before he transferred to LSU.
NFL・1 DAY AGO
The Spun

A scuffle broke out in the handshake line following an SEC basketball game between Florida and. Things started to get out of hand shortly after the No. 18 Volunteers closed out a 78-71 win on their home floor. As the two teams got together for a customary handshake, players started to exchange words from a distance.
COLLEGE SPORTS・1 DAY AGO
The Spun

Former Alabama wide receiver and likely first-round pick Jameson Williams is doing great after he tore his ACL in the National Championship on Jan. 10. Williams spoke to NFL Network’s Ian Rapoport and confirmed that he’s doing awesome just one week after having surgery. “I’m feeling awesome. Ready...
NFL・2 DAYS AGO

UCF Football in the Big XII, What a Full Schedule Will Look Like

Examining the options for UCF Football’s scheduling once it reaches the Big XII in 2023.
ORLANDO, FL・2 DAYS AGO
95.7 The Game

Daeshun Ruffin’s breakout game has given Ole Miss hope as it prepares to host Arkansas on Wednesday in the middle
OXFORD, MS・2 DAYS AGO
Sportsnaut