Mexicans living in US getting new ‘tamper-proof’ passports at consulates 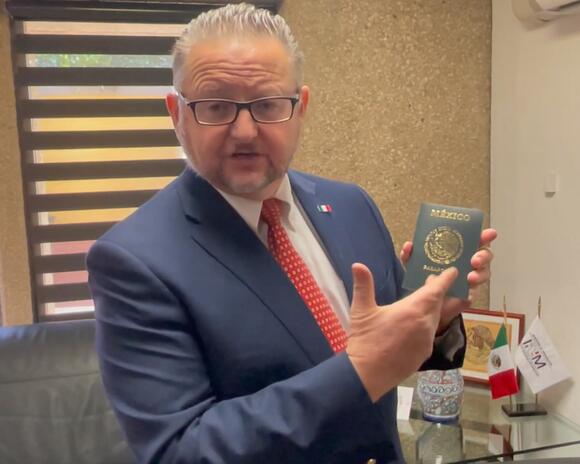 The passport has been available in El Paso since November 4, and Mexican Consul General Mauricio Ibarra Ponce de Leon says its security features make it a reliable identity document for Mexicans in living in the United States.

“This is a new passport that has more than 50 security measures. It includes a chip with biographical and biometric information that makes the passport difficult to forge,” Ibarra said.

Thousands of people come across El Paso’s international bridges from Mexico every day for business, shopping, tourism, or family reasons. In addition, thousands more have been living in the U.S. for many years and their Mexican passport might be the only identity document they have should they request services or run into a traffic stop.

“This is a passport that is going to be recognized all over the world, giving foreign government assurances” that it is genuine, and that the holder can be easily identified, Ibarra said.

The consul said the security features are interlinked. So, if someone wants to change the holder’s name or photograph, for instance, the document no longer will scan.

Children’s passports also are changing, he said. Now, the photos and biographical information of the parents will appear on the minor’s passport to alert authorities whenever the child is traveling with someone other than his parents or legal guardian.

Ibarra said electronic passports will be issued as old, conventional passports expire. “There is no need to come to the consulate and get the new electronic document if your passport is still valid,” he said.

The electronic passport costs the same as the old one: $83 for a three-year document, $116 for one valid for five years and $165 for the 10-year version.

Stacker compiled a list of the largest sources of immigrants in California in 1900 using data transcribed from the 1900 U.S. Census.
CALIFORNIA STATE・1 DAY AGO
FOX 5 San Diego

What is ‘stealth omicron’?

Shark attacks increased around the world in 2021 following three consecutive years of decline, though beach closures in 2020 caused by the COVID-19 pandemic could be making the numbers seem more dramatic than they are, officials said Monday.
WILDLIFE・16 HOURS AGO

The federal government’s rollout of free N95 masks began this week across the U.S., but in San Diego County, there seems to be some confusion about when they will arrive, where you can find them and who’s responsible for distribution.
SAN DIEGO, CA・5 HOURS AGO
FOX 5 San Diego

The average annual income needed to be in the top 1% nationwide is $597,815, according to the analysis.
CALIFORNIA STATE・12 HOURS AGO
FOX 5 San Diego

Thousands of demonstrators protesting vaccine mandates descended onto Washington, D.C. on Sunday, mostly maskless, with some sporting far-right and pro-Trump memorabilia and others drawing comparisons between the vaccine and the Holocaust.
WASHINGTON, DC・2 DAYS AGO
FOX 5 San Diego

When your COVID test expires (yes, every at-home COVID tests expires) should you still use it - and trust it?
SAN DIEGO, CA・13 HOURS AGO

On this edition of News Now: Get an update on conditions up and down California, where an iconic stretch of the coast is burning in Big Sur and wind knocked down trees and took out power lines.
SAN DIEGO, CA・2 DAYS AGO
FOX 5 San Diego

Frank Buckley talked with Rep. Barbara Lee about voting rights and the need for intervention at the federal level.
CALIFORNIA STATE・2 DAYS AGO
FOX 5 San Diego

Counties with the highest COVID-19 death rate in California

Here's a list of counties with the highest deaths from COVID-19 in California using data from U.S. Department of Health & Human Services.
CALIFORNIA STATE・3 DAYS AGO
FOX 5 San Diego

Seven sailors were hurt Monday, including three who had to be airlifted, when a fighter jet attempted to land on the deck of the San Diego-based USS Carl Vinson in the South China Sea, military officials said.
SAN DIEGO, CA・1 DAY AGO
FOX 5 San Diego