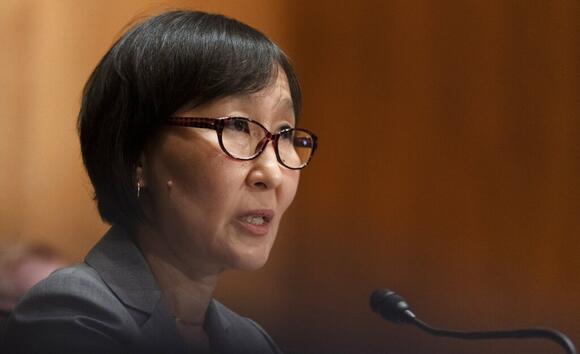 Tester has said he has "some significant concerns about positions" Omarova has taken regarding the financial system banking regulations, as well as on positions about legislation related to the Office of the Comptroller of the Currency.

The Montana Democrat has explained that his concerns about Omarova stem from her opposition to the Economic Growth, Regulatory Relief, and Consumer Protection Act, legislation passed in 2018 that he helped navigate through Congress.

Warner, who supported the legislation, informed Omarova during her confirmation hearing on Thursday that he was "pretty disappointed" in her views.

"Saule Omarova is eminently qualified for this position," a White House spokesperson said. "She has been treated unfairly since her nomination with unacceptable red-baiting from Republicans like it's the McCarthy era."

Republicans have strongly opposed Omarova for her positions, accusing her of wanting to tear apart the banking industry.

"The White House continues to strongly support her historic nomination," the spokesperson said.

Sen. Elizabeth Warren, a Massachusetts Democrat, has supported Omarova as Biden's pick, saying she is an "excellent choice" who will "oversee and regulate the activities of our nation's largest banks."

The Washington Examiner reached out to Sinema, Warner, Tester, Hickenlooper, and Kelly for a statement but did not receive responses.

Obama told an interviewer he could get away with a third term vicariously from behind the scenes. this interview was towards the end of Trump's Presidency. Where is Obama folks ? HE IS BEHIND THE SCENES !!! Joe worked under Biden for eight years and NOTHING has changed. I am not a conspiracy theorist, I just happen to have a good memory OBAMA SAID HE WAS GOING TO DO THIS ON NATIONAL TV. If you saw that interview please comment that you saw it.

She is a communist. I watched her being interviewed in the senate. Democraps always dancing around the truth whenever being asked or questioned about something...still can’t give a yes or no answer. This goes for all these democraps🤮🤮🤮. But of coarse, these are all obiden’s choosing😈😈😈

Good! She is a threat to every American with a bank account. Why would they have even nominated her?

Supreme Court Justice Stephen Breyer’s impending retirement gives PresidentJoe Biden one of the most prized opportunities any president has: a chance to nominate a Supreme Court justice who will likely serve long after he has left the White House.But given that Democrats have only a 50-seat majority with Vice President Kamala Harris as the tiebreaker, many of them are probably already dreading how conservative Democratic Sens Joe Manchin of West Virginia and Kyrsten Sinema of Arizona would vote.Democrats especially can’t be too optimistic after Mr Manchin effectively killed Mr Biden’s proposed Build Back Better bill, while Ms Sinema opposed...
PRESIDENTIAL ELECTION・1 DAY AGO
USA TODAY

A simple majority is all that’s needed to approve a presidential nomination to the country’s highest court.
CONGRESS & COURTS・1 DAY AGO
The Guardian

In past years, news anchors, reporters, commentators, and late-night hosts have unabashedly gushed over Republican senators who’ve broken ranks with their party, hailing them as "mavericks" and "heroes" for casting politics aside and voting with their "conscience." However, when Democrats like Kyrsten Sinema, D-Ariz., and Joe Manchin, D-W.Va., buck...
PRESIDENTIAL ELECTION・2 DAYS AGO
TIME

Biden may get to nominate a justice, but there’s no guarantee that the full Senate will take it up
PRESIDENTIAL ELECTION・1 DAY AGO
Reform Austin

The president has less than 10 months to push through Build Back Better and to finally get voting rights over the goal line. No more Mr. Nice Biden. It’s time to get it done. The post In Year Two, no more Mr. Nice Biden, please appeared first on Louisiana Illuminator.
PRESIDENTIAL ELECTION・2 DAYS AGO

The 81-year-old Pelosi says in an online video that the upcoming election is crucial, and "nothing less is at stake than our democracy.”
CONGRESS & COURTS・2 DAYS AGO
KEYT

Democrats are substantially tamping down their ambitions after failing to pass their top priorities, turning their attention to keeping the lights on and passing narrowly targeted legislation while scrambling to salvage aspects of their sprawling economic agenda. In the past month, Democrats failed to pass a $1.75 trillion bill strengthening...
PRESIDENTIAL ELECTION・6 DAYS AGO
accountingtoday.com

President Joe Biden’s attempt to salvage the centerpiece of his economic agenda has revived some of the same battles among Democrats over the same tax and spending proposals that have bedeviled the plan for months. Democrats are risking their own defeat in the midterms and Biden’s presidency itself if...
PRESIDENTIAL ELECTION・6 DAYS AGO
mediaite.com

MSNBC contributor John Bresnahan criticized President Joe Biden for picking a losing fight regarding his election reform agenda, following what he framed as a dismal first year in office. Bresnahan, a co-founder of Punchbowl News, joined Hallie Jackson Reports, where he told a panel ahead of Biden’s planned remarks that...
PRESIDENTIAL ELECTION・8 DAYS AGO

Democrats are going to try — and fail — to erode the filibuster for voting rights legislation Wednesday. But there are also signs that the party is coalescing around having a litmus test of filibuster changes, at least on legislation specific to election reform. On Wednesday, Sen. Mark...
CONGRESS & COURTS・8 DAYS AGO
fox40jackson.com

Senate Democrats launched an effort yesterday to get an up-or-down verdict on voting rights legislation, knowing full well they are going to lose. It seems to me to be a public display of weakness: Yes, we really want to change the voting laws, and yes, we control both houses of Congress, but we don’t have the votes. And it shifts the public spotlight to boring procedural arguments about the filibuster and other arcane Senate rules.
PRESIDENTIAL ELECTION・8 DAYS AGO
USA TODAY

As Democrats lurch to defeat on voting, it's up to Biden to get his party off the ropes

At least Democrats are reality based. Trump, his devotees and way too much of the Republican Party are from Area 51 or some other planet entirely.
PRESIDENTIAL ELECTION・9 DAYS AGO
Reason.com

The Democratic Party Is the President

The Reason Roundtable's Matt Welch, Katherine Mangu-Ward, Peter Suderman, and Nick Gillespie discuss the new COVID-19 variant and their predictions for 2022. 1:32: Reflections on President Joe Biden's Atlanta speech and his presidency so far. 31:26: Weekly listener question: My fellow social studies teachers and I have created a media...
PUBLIC HEALTH・9 DAYS AGO

Rich Lowry is editor of National Review and a contributing editor with Politico Magazine. Stephen Breyer replaced a liberal justice, and a liberal justice will replace him. That much is assured. There’s no underestimating President Joe Biden’s ability to foul things up for Democrats. It’s easy to imagine him picking someone for Breyer’s seat whose nomination somehow blows up, or at least proves more contentious than expected. And there’s not much cushion in the 50-50 Senate.
PRESIDENTIAL ELECTION・12 HOURS AGO
The Independent

More than half of Americans disapprove of President Joe Biden’s handling of his responsibilities in a new Pew Research Group survey published on Tuesday that found Mr Biden’s approval rating slipping further underwater.Just above four in 10 Americans, 41 per cent, gave Mr Biden positive marks in the poll while 56 per cent say the president is not doing a good job; his approval rating dropped by the same amount, 3 percentage points, by which his disapproval rating rose over the four months between the last survey released by Pew and January 25.Corresponding with that shift in Mr Biden’s...
PRESIDENTIAL ELECTION・2 DAYS AGO