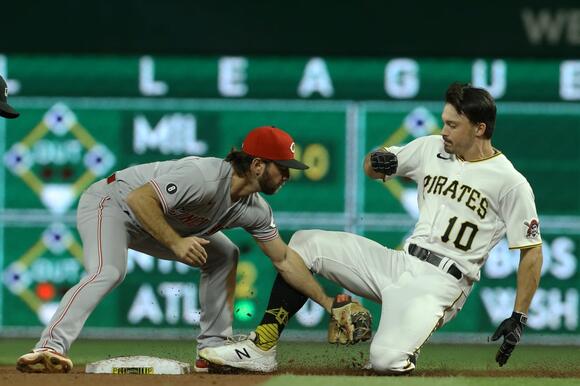 Get caught up on all of your Philadelphia Phillies rumors this Thanksgiving Day!

To start: Happy Thanksgiving from all of the staff here at Inside the Phillies. Myself, Lauren, and all the rest of the staff truly appreciate all the support we have received from you, our readers, since our launch in September.

With that being said, let's get to our rumor roundup from the past week in case you have missed something spending time with family!

Per Jim Salisbury at NBC Sports , the Philadelphia Phillies have had "substantive talks" with reliever Mychal Givens. The reliever pitched to the tune of a 3.35 ERA with 8 saves in 10 opportunities in 2021 with the Cincinnati Reds and Colorado Rockies. He is just one of a few pitchers President of Baseball Operations Dave Dombrowski will surely be looking at to revamp the bullpen.

The Phillies are also reportedly in on center fielder Starling Marte. He is someone that has long been linked to Philadelphia to help with their much maligned area of need. We predicted he would be a fantastic fit here and MLB Insider Jon Heyman reports that the Phillies are indeed interested.

Speaking of Heyman, he also told the Big Time Baseball Podcast that the Phillies are interested in closer Kenley Jansen. Again, if a reliever still has something in the tank, the Phils will likely have a conversation on price.

Other names are Josh Hader and Craig Kimbrel that Philadelphia could try and trade for according to Heyman . As he points out, Kimbrel might be more realistic as Hader could and should command a massive price tag in terms of prospects. The Milwaukee Brewers will not let their star player go easily.

Perhaps what could be one of the biggest splashes this winter, if it comes to fruition, is the trading of Bryan Reynolds. The center fielder is a trade target for many teams, but Jim Bowden at The Athletic reports the Phillies are "aggressively" pursuing a trade for the 2021 All-Star.

Reynolds had a breakout season in 2021 in which he hit .302/.390/.522, but considering he is just 26, the asking price from the Bucs will be sky-high. But, one could dream on an outfield built around the likes of Bryce Harper and Reynolds.

Finally, one name that has been tossed around is Oakland A's third baseman Matt Chapman. The A's are in full teardown mode and Chapman would be a great acquisition for Philadelphia as it is an area of need. The third baseman is controllable through 2023 and has won three Gold Gloves. He would come at a steep price, but he could man the Hot Corner as the Phillies try and get back to the postsea

The MLB lockout freezes big-league transactions. In a way, the Philadelphia Phillies have been frozen for a decade. Missing the
MLB・2 DAYS AGO
Philadelphia Sports Nation

A Look at the Phillies’ Opening Day Lineup for 2022

The Phillies began the International Amateur Free Agent signing period with a blast, nabbing 14 young, Latin American prospects in the first days alone.
NFL・14 HOURS AGO
Inside The Dodgers

After being traded to the Los Angeles Dodgers last season and finishing a massive 10-year deal inked with the Angels, Albert Pujols is now a free agent once again and looking for a team to join for the upcoming 2022 season. In a December interview with La Vida Baseball, the veteran slugger opened ...
MLB・2 DAYS AGO

When it comes to the 2022 campaign, one of the most asked questions for Dodgers fans is what will become of starting pitcher Trevor Bauer. He's in his second year of a three-year, $102 million contract, but he was put on paid administrative leave last season after accusations of sexual assault ...
PASADENA, CA・19 DAYS AGO
NJ.com

ESPN Buster Olney thinks Treinen is one of the bullpen arms in baseball.
MLB・1 DAY AGO
Inside The Dodgers

Joe Kelly is quite the character around Major League Baseball. With two championships under his belt across a 10-year career, Kelly has made his name known in a big way. He took one World Series against the Dodgers in 2018 and another with Los Angeles in 2020, finally bringing a title back to the ...
MLB・1 DAY AGO
WFAN Sports Radio

Veteran outfielder Melky Cabrera announced Friday that he is retiring after 15 major-league seasons. Cabrera, who made his declaration on
MLB・2 DAYS AGO
Los Angeles Times

Tyler White agreed to terms for a minor league contract with the Milwaukee Brewers.
MLB・1 DAY AGO
Chicago Tribune

Outfielder Oscar Colás, the No. 5 international prospect according to MLB Pipeline, came to terms on a $2.7 million deal with the Chicago White Sox, MLB.com’s Jesse Sanchez reported Saturday. According to Sanchez, the Sox and outfielder Erick Hernandez agreed to terms on a $1 million deal. MLB Pipeline ranks Hernandez as the No. 28 international prospect. Colás, who was born in Santiago de ...
MLB・1 DAY AGO
Chicago Tribune

The Atlantic League, which has partnered with MLB as a testing ground for new rules innovations, announced Friday that in 2022, the pitching rubber will return to 50 feet, 6 inches, and home plate umpires will call balls and strikes.
MLB・2 DAYS AGO