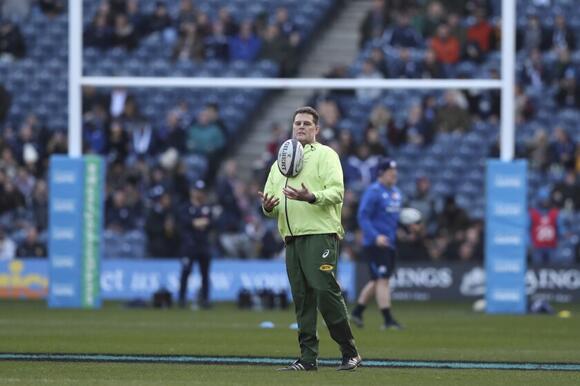 South Africa and Rassie Erasmus have withdrawn their intention to appeal against the sanctions imposed on him for making an hour-long video criticizing a referee during the series against the British and Irish Lions, and also issued an apology.

“This has been a highly stressful and charged environment with unusual pressures placed on all concerned,” SA Rugby said on Thursday, “and we have no wish to prolong that experience for anyone.”

Erasmus, South Africa's director of rugby, was banned last week for two months and barred from attending test matches in an official role for 10 months after World Rugby found him guilty of misconduct.

The charges emanated from a 62-minute video that appeared online in July in which Erasmus sat alone in a room facing a camera and blasted Australian referee Nic Berry following the world champion’s loss to the Lions in the first test.

By saying Erasmus and the national union “wish to apologize to the match officials” involved, SA Rugby said they ”have drawn a line under the incident and only wish to look forward.”

“We will respect the outcomes of the hearing, allowing our national teams and rugby operations to plan with clarity for the coming months,” the statement read.

World Rugby said it welcomed the public apology and considered the case closed.

SA Rugby was also fined $27,000 by the governing body for the incident.

Owen Farrell has been named as England captain for the 2022 Six Nations with a 36-player group selected by Eddie Jones ahead of the tournament.The squad will assemble in Brighton on Monday 24 January for a five-day training camp ahead of the tournament. England open their campaign against Scotland at Murrayfield on 5 February. George Ford is again left out, with Marcus Smith and Farrell preferred at fly-half alongside uncapped Bath youngster Orlando Bailey, who earns a first call-up. Farrell has not played since suffering an ankle injury during the autumn but is expected to be fit for the start...
WORLD・2 DAYS AGO
dallassun.com

Paarl [South Africa], January 19 (ANI): The International Cricket Council (ICC) has congratulated Marais Erasmus for officiating in 100 men's One Day Internationals as an on-field umpire. Erasmus, a member of the Emirates ICC Elite Panel of Umpires, reached the landmark when he took the field in the first ODI...
SPORTS・1 DAY AGO
San Diego Union-Tribune

Gregor Townsend feels the array of on-form talent he has had to select from gives him confidence that Scotland can challenge for the upcoming Six Nations title.The head coach named a 39-man squad on Tuesday, with Fraser Brown, Oli Kebble, Adam Hastings Huw Jones, Sean Maitland and George Horne among a batch of notable omissions.The strength in depth the Scots have at present gives Townsend grounds for optimism that they are equipped to win the tournament for the first time since their Five Nations triumph in 1999.He said: “In terms of where we are, we believe we have a...
RUGBY・1 DAY AGO

France have signalled their expectations that star scrum-half Antoine Dupont will be fit for the Six Nations by naming the Toulouse half-back in a 42-man squad.Dupont has missed the last month because of a knee problem but is in line to return to club action with Toulouse this weekend.Les Bleus will be handed a significant boost should the outstanding playmaker be ready for full preparations for the tournament, with France’s opener a home clash with Italy on February 6.Dupont captained France in the autumn in Charles Ollivon’s absence and could continue with the armband given the regular skipper’s long-term recovery...
WORLD・2 DAYS AGO
The Guardian

Bath rugby director Stuart Hooper will continue in his role when Johann Van Graan becomes head coach next season, the club have confirmed.And current head coach Neal Hatley will be part of Van Graan’s team, working with the forwards alongside new defence specialist JP Ferreira and existing lineout coach Luke Charteris.Van Graan’s group is to be completed by an attack coach, although no appointment has yet been made.Bath have endured a miserable campaign, winning just one of their 12 Gallagher Premiership games and currently propping up the table by an 11-point margin.South African Van Graan’s appointment to the coaching helm...
RUGBY・2 DAYS AGO
The Independent

Owen Farrell faces a race against time to prove his fitness for England’s opening Guinness Six Nations match against Scotland.Farrell had been expected to make his comeback after two months out with an ankle injury in Saracens’ Challenge Cup clash with London Irish on Sunday, but he only resumed team training this week.The 30-year-old has been retained as England captain with head coach Eddie Jones hoping he will lead the team out at Murrayfield on February 5, but there is still the possibility that he will enter the Six Nations without any game time in the bank.“There’s going to be...
WORLD・1 DAY AGO

Owen Farrell has been retained as England captain for the Six Nations but there are several big-name casualties in the training squad named for the opener against Scotland on 5 February.George Ford continues to miss out despite his outstanding form at the heart of Leicester’s revival with Farrell, Marcus Smith and uncapped Bath prospect Orlando Bailey included as fly-halves.There is no place for versatile back Elliot Daly despite his recovery from the stress fracture that forced him to sit out a successful autumn, and his Saracens colleagues Mako and Billy Vunipola also remain in international exile.A fifth ever-present from the 2019 World Cup squad, and up until now a key member of Eddie Jones’ back row, has been frozen out in flanker Sam Underhill.The uncapped Bailey, Alfie Barbeary, Ollie Chessum, Tommy Freeman, Ollie Hassell-Collins and Luke Northmore continue Jones’ overhaul of his England squad as he builds for France 2023.Follow live updates, reaction and analysis below as Jones reveals his 36-man squad:
WORLD・2 DAYS AGO
The Independent

Gregor Townsend has named five uncapped players in Scotland’s 39-man squad for the upcoming Guinness Six NationsSaracens back-rower Andy Christie and London Irish scrum-half Ben White are two of the new faces in the pool.Rory Darge, Ben Vellacott and Kyle Rowe are also rewarded with call-ups ahead of Scotland’s first game of the championship against England at Murrayfield on Saturday 5 February.Bath centre Cameron Redpath, who enjoyed a memorable debut against England last year, has recovered from injury and will once again be in contention ahead of the Six Nations opener.Ewan Ashman, Jamie Hodgson, Josh Bayliss, Javan Sebastian, Pierre Schoeman,...
WORLD・1 DAY AGO
The Independent

England looking ahead despite defeat to Australia

Vitality Roses captain Serena Guthrie insisted a Quad Series loss shouldn’t mean Commonwealth Games success should be seen as a surprise party — her squad still expects themselves to earn an invitation to defend their 2018 title.England got off to a rocky start in Wednesday’s final at London’s Copper Box Arena but quickly regrouped, pulling ahead of defending champions Australia to take a two-point lead at the end of the first quarter and didn’t relinquish their advantage through the second.But the Diamonds returned to court reinvigorated after half-time, and while England found themselves with a one-point lead to end a...
SPORTS・8 HOURS AGO

Owen Farrell has been backed by Eddie Jones to make a successful comeback from ankle surgery in time to lead England into the Six Nations.Farrell has been retained as captain despite being sidelined since limping off against Australia last autumn with Saracens’ Challenge Cup clash with London Irish on Sunday earmarked for his comeback.Testament to Jones’ loyalty to the 30-year-old playmaker is that he will be given every opportunity to prove his fitness for the opener against Scotland at Murrayfield on February 5.In contrast, Sam Underhill and Elliot Daly have been left out of the 36-man training squad due to...
WORLD・2 DAYS AGO
The Independent

Mike Brown insists a resurgent Jack Nowell must be restored to England’s backline after acclaiming him as the greatest winger he has played alongside.Nowell is in contention to win his first cap since the 2019 World Cup in the Six Nations opener against Scotland on 5 February after overcoming a dire run of injuries.Impressed by his renewed impact for Exeter Eddie Jones recalled the 28-year-old to his 36-strong training squad that will begin preparations for the Championship in Brighton next week.Nowell, who owns a pub in his home town of Newlyn, has benefited from giving up alcohol and losing a...
WORLD・1 DAY AGO
The Independent

Eddie Jones could be forced to leave out unvaccinated players during the 2022 Six Nations with England set to visit both Italy and France.Both countries require those attending sport stadiums to prove their vaccination status, with French government sources confirming to AFP on Monday that this would extend to players.That could leave Jones without any players who are not fully vaccinated for England’s Round Two trip to Rome on 13 February and the potential crucial final clash with France on “Super Saturday’, 19 March.Jones named a 36-player squad for a pre-Six Nations training camp on Tuesday, and it is...
WORLD・2 DAYS AGO
The Independent

Defending champions Wales have plenty to consider ahead of the naming of their squad for the 2022 Six Nations.Wayne Pivac’s side will be without their skipper for the defence of their Six Nations crown – Alun Wyn Jones is recuperating from a shoulder injury, and is set to miss the tournament.Jones is among a star-studded list of absentees with which Pivac must contend, with as many as nine British and Irish Lions likely to miss the start of the tournament at the very least. Jones, George North, Leigh Halfpenny, Ken Owens, Justin Tipuric, Dan Lydiate, Ross Moriarty and Josh Navidi...
RUGBY・2 DAYS AGO
The Independent

Eoin Morgan believes it is “laughable” that The Hundred is being blamed for England’s Ashes humiliation as he insisted Test cricket “has always been the priority”.A 4-0 defeat in Australia has prompted much soul-searching and England Test captain Joe Root reasoned that anyone coming into the set-up is doing so “in spite of county cricket, not because of county cricket”.First-class cricket in the country has been increasingly pushed out into the margins of the season in recent years while the inaugural edition of the England and Wales Cricket’s 100-ball event in 2021 was held in July and August.While Root has...
SPORTS・1 DAY AGO
The Independent

Yorkshire have appointed Ottis Gibson as their new head coach on a three-year deal.The club announced that the 52-year-old, who has previously been head coach for the West Indies and South Africa as well as working as a bowling coach for England, is the latest new addition to a much-changed backroom staff at Headingley.He will officially start work at the end of February, after his involvement with Pakistan Super League side the Multan Sultans comes to an end.Last month Yorkshire announced the departures of 16 members of staff, including the entire coaching team.This included director of cricket Martyn Moxon and...
SPORTS・1 DAY AGO
The Independent

Jofra Archer was back with England for the first time in nearly a year after linking up with the Twenty20 squad ahead of their five-match series against the West Indies.Archer is still some way off a return after heading to his native Barbados following a second operation on a longstanding elbow complaint last month.But the fast bowler, whose most recent international appearance came in March last year, was in an England training top on Tuesday and was seen doing some sprinting drills and catching up with team-mates.It is understood he will not be bowling in the nets or taking part in fielding drills with England, who are without several regulars in the Caribbean for the white-ball series against the Windies which starts on Saturday.But this represents a step in the right direction in Archer’s rehabilitation, with the quick entering England’s bubble on Monday.
WORLD・2 DAYS AGO
The Guardian