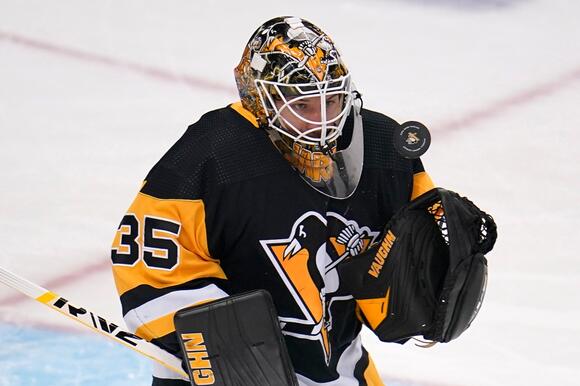 PITTSBURGH (AP) — The Pittsburgh Penguins have spent much of the first six weeks of the season grappling with injuries and a COVID-19 outbreak.

One of their few constants has been the play of goaltender Tristan Jarry, whose playoff flameout last spring seems to be an increasingly small speck in his rearview mirror.

Jarry made 36 saves during a 4-1 victory over Vancouver on Wednesday that pushed Pittsburgh’s winning streak to four. It’s a surge that’s coincided with Jarry’s remarkable return to form. The 26-year-old has stopped 116 of the last 118 shots he’s faced and at one point had the Thanksgiving Eve crowd at PPG Paints Arena chanting his name.

“You can see him back there challenging shots and playing great, reading plays,” Penguins forward Bryan Rust said. “I think his rebound control has been phenomenal. … He’s been phenomenal. It’s been fun to watch.”

Rust and Zach Aston-Reese both ended extended goal droughts — 10 games for Rust, 21 for Aston-Reese — and Brock McGinn and Evan Rodrigues also scored for Pittsburgh. The Penguins have overwhelmed opponents during their four-game run, outscoring Montreal, Toronto, Winnipeg and Vancouver by a combined score of 15-2.

Injuries to stars leave Steelers with no margin for error

“I think we’re building,” Rust said. “Over that Canadian trip, we had some good moments. … That third period in Winnipeg, we were good from the first shift on. We were able to build on it tonight. … For the most part we’re trending in the right direction.”

Thatcher Demko made 33 saves for the Canucks. Bo Horvat scored his sixth goal of the season — Vancouver’s first marker in 147:58 of game time — but couldn’t stop the Canucks from falling to 1-6-1 in their last eight games.

Vancouver’s NHL-worst penalty kill allowed a goal for the 15th time in 20 contests and Vancouver frequently left Demko to fend for himself behind a series of careless turnovers and shoddy play.

Even Pittsburgh’s 32nd-ranked power play — an anomaly mostly brought on by the extended absence of star center Sidney Crosby, among others — showed signs of life.

Vancouver came in allowing opponents to convert a staggering 37% of the time with the man advantage, but managed to turn away two power plays by the Penguins in the first period.

The Canucks weren’t so fortunate in the second. Rust stood in the left circle and hammered home a one-timer off a pass from Kris Letang 49 seconds into the second to give Pittsburgh the lead.

Franklin signs new contract, will stay at Penn State through 2031

Rodrigues, who has thrived after being elevated above the fourth line out of necessity due to injury and illness, doubled the Penguins’ advantage 7:29 into the second thanks in large part to a baffling miscue by defenseman Quinn Hughes.

Hughes got tangled up deep in Vancouver’s zone and rather than drop the puck behind the net to a teammate, instead opted to send a cross-ice pass to nowhere. The puck went right to Rodigues, who faked a pass before rifling a wrist shot from the left circle that zipped to the far post and into the net for his seventh goal of the season and the 100th point of his seven-year career.

Vancouver responded by making an extended push only to have Jarry make a series of masterful stops, including a couple from point-blank range. His last name echoed throughout the arena after one sequence, a far cry from the scene last spring when his shaky play contributed heavily to a first-round playoff loss to the New York Islanders.

Aston-Reese essentially put things out of reach late in the second period, when he converted at the end of a three-on-one break for his first goal since last April.

“Happy to get the first one (of the season) out of the way and hopefully there’s more to come,” Aston-Reese said.

Horvat spoiled Jarry’s bid for his third shutout in four games when he stuffed a backhander from in close by the goaltender with 5:08 remaining in regulation. The Canucks pulled Demko with more than 2 minutes to play but McGinn’s empty-netter quelled any shot at a rally.

NOTES: Jake Guentzel’s secondary assist on Rust’s goal gave him at least one point in 10 of his last 11 games. … Pittsburgh F Brian Boyle was a healthy scratch for the fifth consecutive game. … Penguins C Evgeni Malkin continues to skate on his own while recovering from knee surgery in June. Pittsburgh coach Mike Sullivan said there remains no timetable on when Malkin might be cleared to skate with his teammates but added “we have a ballpark idea of when we think he’ll be available.”

Canucks: Continue a five-game road trip on Friday when they visit Columbus.

Penguins: Travel to New York on Friday to face the Islanders.

Another round of snow is coming later Monday and Monday night

Monday will stay cold with a partly to mostly cloudy sky. A warm front then a cold front combination is going to push another band of snow to the area later Monday into Monday night. Once again, some places could have up to a few inches of snow while other spots will have little or no snow. The best chance for a few inches looks north and west of I-99. Highs on Monday will be in the middle to upper 20s. Temperatures will hold steady or slowly rise Monday night. There can still be some snow showers around early Tuesday then the rest of the day will turn windy and colder. Temperatures on Tuesday will start near 30 but then drop into the 20s during the afternoon. Another push of arctic air will press in for the middle of the week. Temperatures will drop into the single digits Tuesday night and then only rise into the teens to near 20 during the day on Wednesday despite plenty of sunshine. Many of us will drop below zero Wednesday night then Thursday will be cold despite plenty of sunshine. Highs will be in the lower to middle 20s.
ENVIRONMENT・14 HOURS AGO
WTAJ

ANAHEIM, Calif. (AP) — Evgeni Malkin couldn’t have dreamed up a better return to the Pittsburgh Penguins’ lineup. The four-time All-Star and 2012 Hart Trophy winner scored twice and had an assist in his season debut Tuesday night as the surging Penguins rolled to a 4-1 victory over the Anaheim Ducks. “Obviously we were hopeful […]
NHL・12 DAYS AGO
WTAJ

A bitter morning will ease a little Saturday afternoon

Sunshine will mix with some clouds on Saturday. It will be another cold day, but not quite as cold as Friday with highs in the lower to middle 20s. A weak front will bring some scattered flurries and snow showers on Sunday; otherwise, the day will be chilly with clouds and sunshine. Highs will be in the middle to upper 20s. It will turn even colder at the beginning of the next week. Monday will start with morning lows in the single digits. The rest of the day will stay cold with times of clouds and sunshine along with highs in the lower to middle 20s. A warm front may bring a couple of flurries, maybe a snow shower in spots, Monday night into Tuesday. It will be mostly cloudy Tuesday with highs in the 20s to near 30. Some snow is also possible later Tuesday into Wednesday. Behind that system, another push of arctic air is coming in on Wednesday night and Thursday of next week.
ENVIRONMENT・2 DAYS AGO
Sportsnaut

The NHL season officially started back on October 12. In this article, we track all the NHL games today as
NFL・7 HOURS AGO
News 12

Gillies played with the Islanders from 1974 until 1986. He was elected to the Hockey Hall of Fame in 2002.
NHL・1 DAY AGO
Sports Illustrated

Krystof Hrabik made a racist gesture toward Boko Imama of the Tucson Roadrunners.
HOCKEY・2 DAYS AGO

PITTSBURGH (AP) — Kasperi Kapanen and Jeff Carter scored nine seconds apart in the third period to erase a two-goal deficit and Sidney Crosby scored the only goal of the shootout as the Pittsburgh Penguins rallied by road-weary Winnipeg 3-2 on Sunday. The Penguins trailed for more than 40 minutes after falling behind early in […]
NHL・22 HOURS AGO
KESQ

VANCOUVER, British Columbia (AP) — Justin Faulk had a goal and an assist and the St. Louis Blues beat the undermanned Vancouver Canucks 3-1. Brayden Schenn and Jordan Kyrou also scored for the Blues, and Vladimir Tarasenko had two assists. Ville Husso stopped 38 shots and has a .963 save-percentage in his last five games. Tanner Pearson had a goal for the Canucks, who have six players and two assistant coaches in the NHL’s COVID-19 protocols. Michael DiPietro had 14 saves in his season debut for Vancouver, becoming the fourth goalie to play for the team this season.
NHL・13 HOURS AGO
San Diego Union-Tribune

Clark Gillies, a Hall of Fame left winger who provided a physical presence and a scoring touch for the New
NHL・2 DAYS AGO
Sportsnaut

The Pittsburgh Penguins are surging at the season's halfway point, but head coach Mike Sullivan says there is more work to be done
NHL・1 HOUR AGO
Sportsnaut

Vegas Golden Knights winger Reilly Smith is one of the hottest names leading up to the NHL trade deadline. With
NHL・1 HOUR AGO
Sportsnaut

The Pittsburgh Penguins are proving that it’s never wise to count them out. Not in games. Not in the chase
NHL・1 HOUR AGO
WTAJ

Melanie and Clay Phillips from Village Eatinghouse stop by the 814 Kitchen to show us how they make their shredded Italian Chicken. It’s so easy. It only requires TWO ingredients: Boneless chicken thighs and Village Eatinghouse Simple & Sour Italian sauce. Their sauces are for any season — not just summer!
RECIPES・5 DAYS AGO
WTAJ

Today will be milder before arctic cold air moves in

This morning we will be partly to mostly cloudy. Temperatures this morning will be in the 20s. Today we will have a southwesterly wind between five to ten miles an hour. This will usher in some milder air. High temperatures will be in the lower to mid 40s. A clipper system will try to move in. We will have variable cloudiness with a few showers and snow showers in the afternoon and evening hours. Tonight temperatures will dip into the teens to lower 20s. Tonight we will see rain and snow showers turning over to a few snow showers.
ENVIRONMENT・5 DAYS AGO