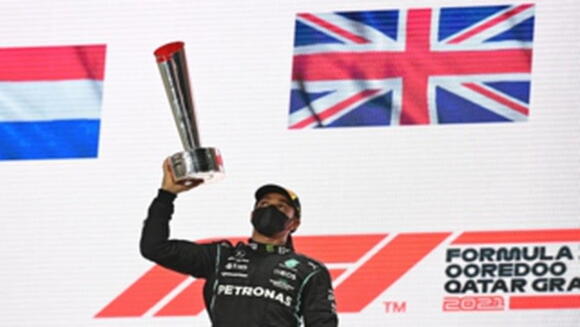 Mercedes chief Wolff and Red Bull boss Horner have been at odds all throughout the seasons – much like their respective on-track counterparts, Lewis Hamilton and Max Verstappen.

Defending champion Hamilton is looking to retain the drivers’ title for Mercedes, while Verstappen is seeking his first championship.

Van de Grint, who worked at Bridgestone during the height of Michael Schumacher’s F1 success, is much preferring the battle between Hamilton and Verstappen than Wolff and Horner’s feud.

“I think that’s terrible, I think it’s tacky,” the Dutchman told Motorsport.com . “And then marshals are insulted. It is childish.

“Let everyone focus on their own cars. We have a fantastic season, we have two great drivers who actually downgrade the rest of the field. Fantastic, that’s motorsport.

“We look at motorsport and not at this sort of thing, right? When I hear terms that I don’t want to repeat, that annoys me, too. I am sorry to hear that.”

Next up is the Saudi Arabian GP on Sunday 5 December, one week before the season finale in Abu Dhabi.

Mercedes Team Principal Toto Wolff has recently emphasized the characteristic that according to him separates Lewis Hamilton and Max Verstappen. Lewis lost out on his record eighth world title during the Abu Dhabi Grand Prix of the 2021 Formula1 season. It has been stated in automotorsport that Toto Wolff during...
MOTORSPORTS・2 DAYS AGO
firstsportz.com

Other than the dramatic and intense title dual between Mercedes Lewis Hamilton and 2021 world champion Max Verstappen, the dominance in car performance Mercedes and Red Bull cars had over their rival teams stood out the most. The top 3 finishers in constructers championship, Mercedes at P1, Red Bull at P2 and Ferrari at P3, showed how having big financial backing is important to peruse championship in F1.
MOTORSPORTS・1 DAY AGO
Daily Mail

Lewis Hamilton is staying quiet because he wants to distance himself from Mercedes chief Toto Wolff, claims ex-F1 champion Jacques Villeneuve... who thinks Brit could turn his attention to a career in HOLLYWOOD

Ex-Formula One World Champion Jacques Villeneuve believes Lewis Hamilton could be set for a career in Hollywood, after the Mercedes driver continues to remain quiet ever since his controversial defeat to Max Verstappen in Abu Dhabi. Hamilton saw what would have been a record-breaking eighth crown slip through his fingertips...
MOTORSPORTS・19 HOURS AGO
racingnews365.com

Exclusive: Horner explains how Red Bull will work with Honda in 2022

In an exclusive interview with RacingNews365.com, Christian Horner has outlined the details of how Red Bull's engine supply deal with Honda will continue in 2022. Christian Horner has explained how Red Bull's relationship with Honda will continue for the foreseeable future, as Red Bull Powertrains slowly build up their own engineering and manufacturing abilities.
MOTORSPORTS・19 HOURS AGO

Top-tier motorsport and positive climate action are not concepts the general population often associates with one another. After all, how can sending out a field of high-speed cars to race around a track for a couple of hours a few times per month be anything other than a colossal contributor to environmental decline and global temperature rises?Motorsport is about speed and glory, of course, but the manufacturers who enter racing championships such as Formula One do so primarily for another reason – to use the resources, competition, and talent in motorsport to develop technologies which can be applied to road...
MOTORSPORTS・2 DAYS AGO
The Independent

The competition in Formula 1 will be closer with multiple cars expected to be in the mix in 2022, according to an FIA chief.Regulation changes have been introduced for the upcoming season to improve the aerodynamics of the car and teams like Alfa Romeo and Haas could capitilise. Head of Single Seater Technical Matters at the FIA, Nikolas Tombazis, says he expects those underdog teams to challenge for race wins.“It is difficult to expect it to be more exciting than [2021] because that is a very high point of reference,” said Tombazis, quoted by Autosport. “But I think once there’s...
MOTORSPORTS・1 DAY AGO
The Independent

Alpine CEO Laurent Rossi has called Silverstone and Monza “shabby” and the “great” tracks will have to be at the “top of their game” to stay staple circuits in the Formula 1.Multiple new circuits are coming into the sport with the 2022 season having more than any other year with 23 slated. And the F1 isn’t stopping there with more talks being had elsewhere which could increase the amount of tracks in 2023. Rules state the F1 can’t have more than 25 races in a year and Rossi believes older circuits need to update or risk getting cut.“I personally think...
MOTORSPORTS・1 DAY AGO
The Independent

An Australian Grand Prix boss says the Formula 1 won’t have a visa situation like Novak Djokovic’s and says the country’s entry rules are “simple”.Questions are being raised in every sport in Australia which requires athletes to travel to the country after the tennis player was deported after his visa was cancelled. But the GP’s CEO Andrew Westacott has reassured fans a similar incident won’t impact the event, which will take place on 10 April.“We’ve worked very closely with the Victorian government throughout 2021 and in the lead up to 2022,” he said. “And of course we’ve worked very, very...
TENNIS・1 DAY AGO