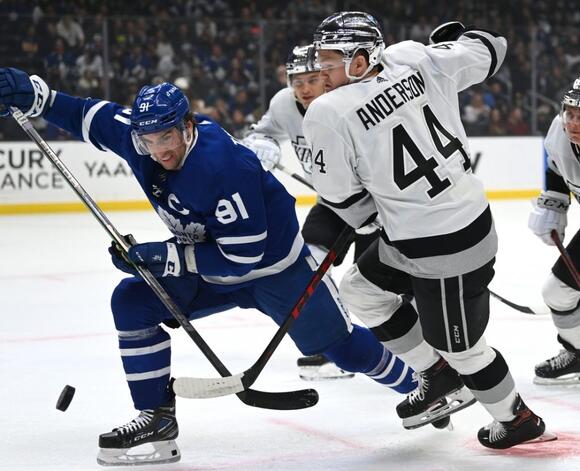 John Tavares, Auston Matthews and Pierre Engvall each had a goal and an assist for the visiting Toronto Maple Leafs in a 6-2 win against the Los Angeles Kings on Wednesday night.

Alexander Kerfoot, Jason Spezza and Michael Bunting also scored, Rasmus Sandin had three assists, and Jack Campbell made 30 saves for Toronto, which has won 12 of 14.

Sean Durzi had a goal and an assist in his NHL debut, Viktor Arvidsson also scored, and Jonathan Quick made 32 saves for the Kings, who have lost five in a row following a seven-game winning streak.

Toronto showed its speed early when Kerfoot scored on a backhand off the rush for a 1-0 lead at 4:30 of the first period.

Arvidsson tied it 1-1 when he deflected a point shot from Durzi at 1:21 of the second period.

The Maple Leafs took over from there, scoring four straight goals in the second period to build a 5-1 lead entering the third.

Wayne Simmonds centered the puck to Engvall off a 4-on-3 rush and he scored into the open side of the net for a 2-1 lead at 3:19.

Tavares scored his ninth of the season when he deflected a shot past Quick to make it 3-1 at 5:26.

Matthews, who led the NHL with 41 goals in 52 games last season, scored his eighth of the season at 13:16 to make it 4-1. Tavares brought the puck out from behind the Los Angeles net and fed Matthews on the other side for the redirection.

Los Angeles killed the first two Toronto penalties, but Spezza capitalized on the third when he scored on a slap shot from the top of the right circle for a 5-1 lead at 15:36.

The Maple Leafs scored six goals for the first time this season shortly after Quick made a diving stick save on Sandin, but Bunting scored the rebound to make it 6-1 at 3:59 of the third period.

Whenever the Toronto Maple Leafs visit the New York Islanders, you can expect to hear a loud barn. Well, at least since 2018-19. Ever since the Maple Leafs signed John Tavares back in July 2018, his returns to face his former team have always been full of boos from the Islanders faithful. It got to a point where Tavares was hearing cheers for getting thrown out of the faceoff circle.
NHL・18 HOURS AGO
Sportsnet.ca

So, the Toronto Maple Leafs are playing on Long Island?. Well, two things are guaranteed. Captain John Tavares will get booed every time he touches the puck (yep). And the Leafs will build themselves a 3-1 lead on the road (yep). But unlike Toronto’s four previous 3-1 leads on this...
NHL・1 DAY AGO
Sportsnaut

Alex Iafallo, Viktor Arvidsson and Carl Grundstrom scored to lift the visiting Los Angeles Kings to a 3-2 win over
NHL・8 HOURS AGO
Sportsnaut

Nearly two years ago, Chris Kreider was a candidate to be traded before eventually signing a seven-year contract extension. Now
NHL・3 HOURS AGO

Krystof Hrabik of the AHL’s San Jose Barracuda was suspended 30 games for directing a racist gesture at Tucson Roadrunners forward Boko Imama, who is a Canadian of Congolese descent.
NHL・2 DAYS AGO
CBS Boston

BOSTON (CBS) — The Bruins earned a spirited 4-3 win over the Washington Capitals on Thursday night, but it may have come at a cost. Brad Marchand had to leave the game in the second period after taking a hit from behind by Washington’s Garnet Hathaway, which head coach Bruce Cassidy called a “cheap hit.” Marchand suffered an upper-body injury on the play, which occurred a little more than halfway through the second period. The Bruins winger went into the corner to play the puck, and Hathaway lined him up and delivered a crushing blow right between the numbers, sending Marchand...
NHL・2 DAYS AGO

The NHL season officially started back on October 12. In this article, we track all the NHL games today as
NFL・1 DAY AGO
WFAN Sports Radio

’When you saw Clark Gillies, you thought Islander’: Head coach Barry Trotz and the team react to the unexpected death of a franchise legend.
NHL・1 DAY AGO
Sports Illustrated

Krystof Hrabik made a racist gesture toward Boko Imama of the Tucson Roadrunners.
HOCKEY・2 DAYS AGO
News 12

Clark Gillies, a Hockey Hall of Famer and four-time Stanley Cup winner with the Islanders, has died at 67.
NHL・1 DAY AGO
USA TODAY

Leon Draisaitl had two goals and two assists, Evan Bouchard also scored twice and the Edmonton Oilers came from behind to snap a seven-game losing streak with a 5-3 victory over the Calgary Flames
NHL・1 DAY AGO
WGR550

Rasmus Ristolainen made his return to Buffalo on Saturday for his first career game against the Sabres. Paul Hamilton has more on his return, plus some postgame thoughts on Buffalo’s 6-3 win over the Flyers:
NHL・1 DAY AGO

Justin Faulk had a goal and an assist and the St. Louis Blues beat the undermanned Vancouver Canucks 3-1
NHL・3 HOURS AGO
Sportsnaut

Kraken knock off Panthers for third win in four games

Mason Appleton had a goal and an assist as the Seattle Kraken defeated the visiting Florida Panthers 5-3 Sunday night.
NHL・6 HOURS AGO
Sportsnaut

In so many ways, the Calgary Flames are on the right track. Despite having only one win in their last
NHL・2 HOURS AGO