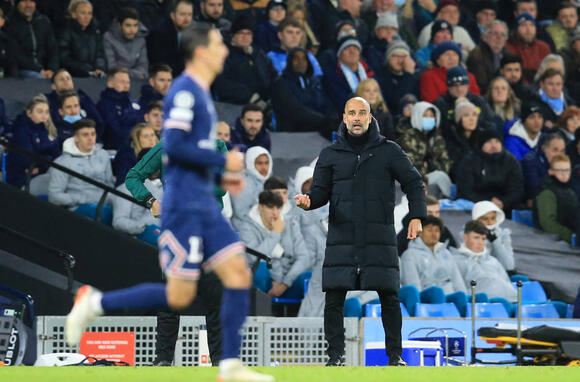 City - with a heavily rotated side - dominated Paris Saint-Germain at the Etihad Stadium to confirm qualification and top spot in Group A.

Kylian Mbappe opened the scoring for the Parisians just after half-time with a well-taken finish at the back post. Manchester City were in control, but PSG had made their limited opportunities count.

The Blues didn't panic however, and immediately ceased control of the game to equalise through Raheem Sterling. Rodri's through ball was cut back by Kyle Walker for the 26-year-old to notch his third goal in three games.

With 15 minutes to play, Gabriel Jesus won the game for City. A similar method to the equaliser, Riyad Mahrez's whipped cross was cut back by Bernardo Silva for the Brazilian to tap home.

After the game, Pep Guardiola was full of praise for both sides in what was a Champions League classic at the Etihad Stadium. He was also quick to point out the depth of quality PSG possess.

"PSG, what a team, what players. We played really well. Incredibly good. Except five minutes after conceding a goal, but this is normal."

The Manchester City manager continued, "Top performance. Happy to be in the next stage [of the Champions League]. Focus on the Premier League until February."

Manchester City's focus will now, as Pep Guardiola points out, turn to the Premier League and the visit of West Ham United at the weekend. The Hammers are flying and will want City to be the latest of their big team scalps.

Bernardo Silva was largely tipped to evolve as David Silva's successor at the Etihad Stadium when the 27-year-old completed a £43 million move to join Manchester City from AS Monaco off the back of a league-winning campaign in France. The Portuguese, who has been arguably Manchester City's best player...
PREMIER LEAGUE・1 DAY AGO
The Guardian

FIFA have named the world XI of the best players in the world over the past year picked by fans across the globe, with five Premier League players making the star-studded lineup, as confirmed on Thursday. Kevin De Bruyne has been named as part of a three-man midfield alongside Chelsea...
PREMIER LEAGUE・2 DAYS AGO

As several of the world's leading companies, football brands, and clubs announce their respective awards and rankings for the year of 2021, the number one football video game has now released their world XI from the last 12 months. After a round of voting from millions of players of FIFA...
PREMIER LEAGUE・2 DAYS AGO
Yardbarker

Pep Guardiola took over at Premier League club Manchester City ahead of the 2016-17 season and established himself as unquestionably one of the greatest managers of the modern era. Guardiola guided City to a third league title under his watch last spring, and his sides have won eight major trophies leading up to what is set to be yet another successful campaign considering City are viewed by many as the uncrowned Premier League champions for 2021-22 even before February.
NEW YORK CITY, NY・1 DAY AGO
CityXtra

On Friday, numerous reports from South America stated that Manchester City were in talks to sign Julián Álvarez - one of Argentina's hottest prospects, with one journalist reporting that a deal was "about to close" for the player to move to England. The 21 year-old was named South...
PREMIER LEAGUE・1 DAY AGO

On Friday, a flurry of reports from both Argentina and England claimed that Manchester City were in talks to sign Julian Alvarez from River Plate, with the 21-year-old out of contract in December. The centre-forward, who recorded 39 direct goal involvements in 46 appearances for River Plate in 2021, has...
PREMIER LEAGUE・17 HOURS AGO
The Independent

Runaway leaders Manchester City were denied a 13th Premier League victory in a row after being held to a 1-1 draw by battling Southampton Aymeric Laporte headed a 65th-minute equaliser for Pep Guardiola’s men following a surprise early opener from Saints defender Kyle Walker-Peters.Kevin De Bruyne and Gabriel Jesus struck the same post in the second period but City were unable to find a winner during incessant pressure as they failed to win a top-flight game for the first time since a shock 2-0 loss at home to Crystal Palace way back in late October.The result leaves the reigning champions...
PREMIER LEAGUE・19 HOURS AGO
San Diego Union-Tribune

Riyad Mahrez's desire to avoid a premature return to Manchester could not be fulfilled as Algeria suffered their third group-stage loss to surrender their Africa Cup of Nations crown after a disappointing tournament for Djamel Belmadi's side. While Manchester City have not overly missed the former Leicester man in their...
PREMIER LEAGUE・2 DAYS AGO

It was an awful start for the visitors, who conceded early through Kyle Walker-Peters' first Premier League goal. Manchester City quickly got on top of things, but it took until well into the second-half for the equalising goal to come - thanks to Aymeric Laporte. Claims for a penalty and...
PREMIER LEAGUE・19 HOURS AGO
CityXtra

The England international is currently enjoying his best run of form for the Premier League champions in over a year, after what has been a difficult period on the pitch at the Etihad club for the London-born star. The 27 year-old lost his place in the starting XI halfway through...
PREMIER LEAGUE・2 DAYS AGO
CityXtra

Harry Kane's desire to join Pep Guardiola's side in the summer after yet another disappointing, trophy-less campaign in north London has been well-documented since the 28-year-old's failed attempts to engineer a move to the Etihad Stadium. Manchester City were hunting for a suitable man to fill the void left up...
PREMIER LEAGUE・4 HOURS AGO
goal.com

What a game that was from Diego Simeone's men, trailing 2-0 before scoring three goals in the second half – including two in stoppage time – to claim all three points. An epic, monumental comeback. Whew! Take a breather, everyone. Has this been the most Atletico Madrid game...
PREMIER LEAGUE・16 HOURS AGO
CityXtra

One of the most underrated aspects of Pep Guardiola's tenure as Manchester City manager is his ability to deal with key absences and maintain unprecedented success. His domination of the Premier League is no fluke. When Manchester City were without key left-backs in the 2017/18 season, the Catalan converted central midfielder Fabian Delph into one of the best-inverted full-backs in the league.
PREMIER LEAGUE・1 DAY AGO
CityXtra

Raheem Sterling Would Have Been 'Open' to Barcelona Loan Switch, Reveals New Report

With Raheem Sterling’s current Etihad Stadium contract set to run out in the summer of 2023, speculation about a potential move away from Manchester City has continued to rumble on. One of the reported destinations included was a possible move to Spanish giants Barcelona. As per a new report...
PREMIER LEAGUE・2 DAYS AGO
CityXtra

Reports are continuing to flood in regarding Manchester City's apparent pursuit of River Plate striker, Julian Alvarez. Earlier today, Hernan Castillo, a local journalist, reported Manchester City were 'about to close' a deal to sign the talented youngster - with various TyC Sports journalists confirming that information. It went a...
PREMIER LEAGUE・1 DAY AGO
The Guardian

A drone interrupted play at Brentford, we had a late, late winner at Old Trafford and Newcastle dug in for victory on an eventful afternoon
PREMIER LEAGUE・21 HOURS AGO