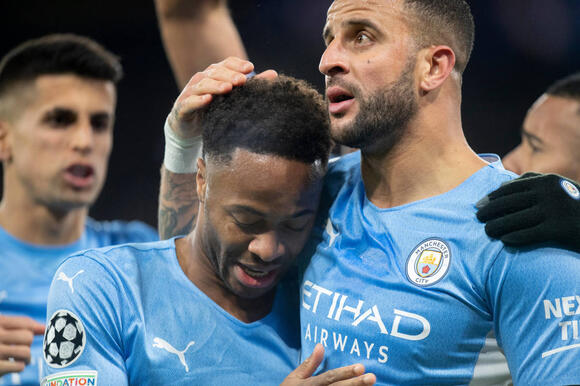 Sterling is now in his seventh season as a Manchester City player following his move from Premier League rivals Liverpool in the summer of 2015, scoring a total of 117 goals in 308 appearances.

The winger has also now scored in both of his last three appearances at the Etihad Stadium for Pep Guardiola's side - ending a 12-game goal drought that stretched back as far as August.

But long before those goals against Club Brugge, Everton and PSG, Sterling has been the subject of intense speculation linking him with a move to Barcelona, who are on the lookout for a new forward to boost new manager Xavi's top-four push.

Unfortunately for the Catalan club, their chances of signing Sterling in January have never looked good thanks to their financial problems and Manchester City's unwillingness to sell a key player mid-season without a proper replacement.

Now, a report from ESPN indicates that Barcelona have all but given up on landing Sterling in the upcoming window.

Though they looked into a move for the player in the summer and are still interested, the deal is "complicated" thanks to the price tag Manchester City have placed on their man - thought to be in the region of £45 million to £50 million.

While Manchester City are not opposed to letting Sterling leave on loan, they are reportedly insistent on including an obligation to buy the player in the deal, which makes things difficult for cash-strapped Barcelona.

The report claims that Xavi's side are therefore considering alternative options who could more feasibly be signed on a short-term loan without any mandatory purchase at the end, namely Chelsea's Hakim Ziyech and Timo Werner.

This news is sure to divide Manchester City fans; many of whom feel that Sterling's time at the club is coming to an end and were expecting the England star to depart the Etihad at the next opportunity.

But Sterling still has plenty of fans in the blue half of Manchester too, and his crucial goal against Everton and French giants PSG is a sure step towards getting back in the good books of many supporters.

Pep Guardiola has been the jewel in the Manchester City crown for a number of years. The Spanish tactician’s genius is what has made the club a winning machine, securing three Premier League titles, one FA Cup and four Carabao Cup trophies in his five full seasons in charge.
PREMIER LEAGUE・2 DAYS AGO
The Independent

Liverpool moved to within nine points of Manchester City at the top of the Premier League table with an entertaining 3-1 win over Crystal Palace at Selhurst Park.Virgil van Dijk gave the visitors the lead in the eighth minute, thumping a bullet header beyond Vicente Guaita from an Andy Robertson corner. And Liverpool’s dominance was rewarded with a second shortly after the half hour mark when Robertson crossed for Alex Oxlade-Chamberlain to bring down and fire home at the back post.Palace finally got a foothold in the game towards the end of the first half and continued that urgency after...
PREMIER LEAGUE・2 DAYS AGO
CityXtra

While City were far from their best at St. Mary’s, a rare tough night at the office does not demand a meltdown, as the league leaders maintain a sizeable nine point-gap ahead of Liverpool in the Premier League table. Speaking after the Premier League champions’ recent fixture, Pep Guardiola...
PREMIER LEAGUE・1 DAY AGO
CityXtra

The Argentinian media lit up last week, as if one mass email had been sent out to everysinglejournalist@argentina.com, with reports that Manchester City were about to activate the release clause of River Plate’s striker, Julián Álvarez. At first, I assumed we were on the receiving end of...
PREMIER LEAGUE・23 HOURS AGO

Premier League clubs are interested in Manchester City attacker James McAtee. McAtee's strike in the 1-0 win over Chelsea sent City to the top of Premier League 2 and took his goals tally for the season to 14, ahead of Arsenal's Folarin Balogun, now on loan at Middlesbrough and Dilan Markanday who left Tottenham for Blackburn last week.
PREMIER LEAGUE・14 HOURS AGO
CityXtra

A comprehensive round-up of all the latest Manchester City transfer news and gossip from across the globe, as we enter the final week of the January transfer window. Julian Alvarez to Manchester City should be announced before Friday. (Diario Ole, Sport Witness) Pep Guardiola and Manchester City will wait for...
PREMIER LEAGUE・14 HOURS AGO
CityXtra

The Premier League champions were halted at last after a series of narrow wins since the turn of the year, with Southampton avoiding defeat at the hands of the Sky Blues for the second time this season. A terrific opener by Kyle Walker-Peters was cancelled out by an Aymeric Laporte...
PREMIER LEAGUE・2 DAYS AGO
The Independent

Kevin De Bruyne has insisted the title race is not over and is determined to make sure Manchester City maintain their intensity.Premier League leaders City dropped points for the first time since October on Saturday as they were held to a 1-1 draw at SouthamptonThe result ended the champions’ run of 12 successive victories and allowed second-placed Liverpool who have game in hand and a trip to the Etihad Stadium to come, to cut their advantage to nine points.De Bruyne told City TV: “Obviously the schedule in December is a lot of games following each and we managed to...
PREMIER LEAGUE・21 HOURS AGO

Julian Alvarez has been heavily linked with a potential switch to Manchester City across the past few days, with negotiations between all relevant parties seemingly accelerating in a matter of hours on Saturday. Following the departure of legendary forward Sergio Aguero last summer, and the recent sale of Ferran Torres,...
PREMIER LEAGUE・2 DAYS AGO
CityXtra

All the talk around Manchester City at the moment is surrounding their potential new signing, Julian Alvarez. Since the 21-year-old burst onto the radar last Friday, rumours have suggested his move to the Etihad Stadium is imminent - but what they intend to do with the young talent is another question.
PREMIER LEAGUE・20 HOURS AGO
CityXtra

With Pep Guardiola’s contract at Manchester City set to run out in 2023, the million-dollar question remains, which manager will be the successor to the Spaniard after his departure. The Catalan coach has won ten trophies in his five full seasons at the Etihad Stadium, and looks on course...
PREMIER LEAGUE・2 DAYS AGO
CityXtra

Manchester City were finally held in their tracks after going on an incredible 12-game winning run in the Premier League as Southampton held the league leaders with a spirited display at St. Mary's on Saturday evening. The Saints took the lead in less than 10 minutes, as Kyle Walker-Peters' brilliant...
PREMIER LEAGUE・20 HOURS AGO

After seeing their 12-game winning run in the Premier League be halted by Southampton following their 1-1 draw at St. Mary's at the weekend, Manchester City players and staff have been handed a two-week break before resuming action in the FA Cup against Fulham on February 5th. The likes of...
PREMIER LEAGUE・19 HOURS AGO
CityXtra

Manchester City’s status as one of the greatest ever teams in Premier League history is undoubtable at this point. Winning three Premier League titles, one FA Cup trophy and four Carabao Cups in a row, Pep Guardiola’s side have certainly taken English football by storm, since the Catalan's arrival in the summer of 2016.
PREMIER LEAGUE・2 DAYS AGO
CityXtra

If there’s one theory that always comes true in the case of Premier League champion teams in recent seasons, it is their ability to pull wins out of the bag, while not necessarily being at their scintillating best. Manchester City have showcased this trait multiple times this season, and...
PREMIER LEAGUE・18 HOURS AGO
SPORTbible

Ousmane Dembele has been told that Barcelona want to sell him this month, and the forward's price tag is reportedly attracting interest from the Premier League. Dembele's current contract is due to expire at the end of the season, and the club have been desperately trying to sign him to a new one.
PREMIER LEAGUE・1 DAY AGO
CityXtra

A comprehensive round-up of all the latest Manchester City transfer news and gossip from across the globe, as we head into the final week of the January transfer window. Manchester City are set to confirm the signing of River Plate forward, Julian Alvarez. (Graeme Bailey, 90Min) It is likely that...
PREMIER LEAGUE・1 DAY AGO
CityXtra

It is far from an outlandish shout to suggest that Manchester City midfielder Rodri has been the most in-form defensive midfielder in Europe this season, acting as a vital cog in Pep Guardiola's system. While the Spanish international did impress in his opening two seasons at the Etihad Stadium, there...
PREMIER LEAGUE・1 DAY AGO
The Guardian

With Pep Guardiola’s current deal set to expire in the summer of 2023, the Manchester City boss’ future at the club hangs in the balance. The Catalan is into his sixth season at the Etihad, the most time he has spent at any club during his managerial career and it’s safe to say that his tenure has been an overwhelming success.
PREMIER LEAGUE・2 DAYS AGO