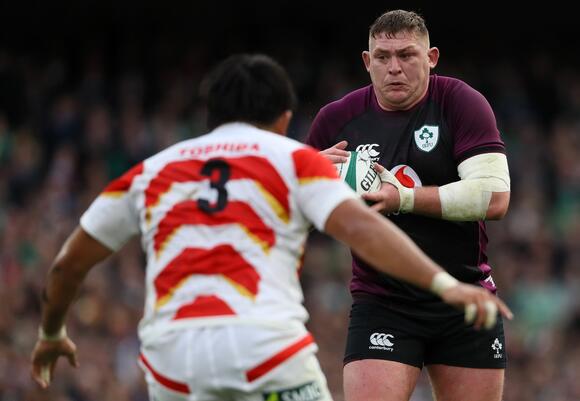 Ireland and Leinster prop Tadhg Furlong has signed a three-year contract extension with the Irish Rugby Football Union which runs until the end of the 2024-25 season.

The 29-year-old tighthead has won 52 caps for his country after playing all three of their autumn internationals as Ireland extended their winning streak to eight games.

Furlong also started the last six Tests for the British and Irish Lions having been selected for the summer tour of South Africa following the 2017 trip to New Zealand.

IRFU performance director David Nucifora told irishrugby.ie: “Tadhg has again illustrated his pedigree as one of the best tightheads in world rugby.

“His performances for Ireland and the British and Irish Lions in the past year have been top drawer and we are delighted that he has extended his contract to the end of the 2024-25 season.”

Furlong, who made his international debut ahead of the 2015 World Cup, has made 116 appearances for Leinster, winning the Heineken Cup in 2018 and four PRO14 titles.

“November was a really positive block for the Ireland squad and it was great to have supporters back in the stadium,” he said.

“Ireland and Leinster have started the season well and both squads will be aiming for silverware again this season.”

Jessica Ennis-Hill has been advising England’s squad on how to deal with expectation after being invited to talk at their Brighton training camp.The London 2012 heptathlon gold medallist took part in a Q&A organised by Maro Itoje and George Furbank to assist Eddie Jones’ team in their Six Nations title quest.“She was obviously an outstanding athlete and it’s a great story with the resilience she showed and the expectation she had to cope with,” Jones said.“I embarrassed myself at the start by calling her the wrong name. It’s a bit embarrassing for the team that their head coach is such...
RUGBY・1 DAY AGO
The Guardian

Over-by-over report: England rallied with the bat but could not surpass West Indies’ huge total of 224, with Rovman Powell scoring a century
SPORTS・1 DAY AGO
The Independent

Jonny Brownlee and Alex Yee both said the Commonwealth Games was their main focus this year after being named alongside Georgia Taylor-Brown and Sophie Coldwell in Team England’s triathlon line-up.Birmingham 2022 takes place from July 28-August 8 and triathlon will be the first medal event on the programme at Sutton Park.Yee told the PA news agency: “We’re really fortunate to have the Commonwealth Games this year, I think it’s come at a good time, kind of continuing on from the Olympics last year and keeping a bit of that momentum.Team Announcement 🏴󠁧󠁢󠁥󠁮󠁧󠁿@jonny_brownlee, @sophiecoldwell, @georgiatb and @Lixsanyee have been named as...
SPORTS・2 DAYS AGO
The Independent

Paul Collingwood believes Chris Jordan is the “perfect” Twenty20 cricketer but admits England’s shortcomings while bowling at the back end of innings have been highlighted recently.Jordan is renowned as one of the world’s best fielders and his batting in the first two T20s against the West Indies has been a fillip in the Caribbean, although he has seemed to go off the boil while bowling at the death.For so long England’s go-to as the game reaches a crescendo, Jordan was pummelled by Jimmy Neesham in England’s T20 World Cup loss against New Zealand in November, leaking 23 in the over...
SPORTS・2 DAYS AGO

Former England head coach Steve McNamara has signed a new two-year contract with 2021 Super League Grand Finalists Catalans Dragons. The 50-year-old guided the Dragons to their first Old Trafford visit last season, having already won the 2018 Challenge Cup with the Dracs. His side finished top to take the...
RUGBY・2 DAYS AGO
The Independent

Yorkshire could discover next week if their right to stage international matches at Headingley will be restored.The county had lucrative matches scheduled for this summer removed from them by the England and Wales Cricket Board last November over their handling of an investigation into allegations of racial harassment and bullying by former player Azeem Rafiq.Members of Yorkshire’s leadership team, including new chair Lord Kamlesh Patel, will make a presentation to the ECB next Tuesday, with club members voting on changes to the county’s board structure at an extraordinary general meeting the following day.ECB deputy chair Martin Darlow told a select...
SPORTS・2 DAYS AGO
The Guardian

Captains and coaches agree a strong start is vital in what looks like a wonderfully poised tournament, despite the injury issues faced by England and Wales
RUGBY・1 DAY AGO
The Independent

England were set a huge 225 to take the lead in their Twenty20 series against the West Indies after coming under some sustained punishment from Rovman Powell’s titanic 107 from 53 balls.Moeen Ali came in as captain in the absence of Eoin Morgan who suffered a quad niggle in the warm-up, while the tourists handed T20 debuts to Phil Salt, Harry Brook and George Garton for this third T20 in Barbados.Garton took his maiden international wicket in his first over but the left-armer, one of three in England’s XI alongside Reece Topley and the returning Tymal Mills was...
SPORTS・1 DAY AGO

When is the Six Nations and what are the 2022 fixtures?

For the first time in nearly two years, fans are set to return to the stands for the 2022 Six Nations.Rugby’s grand old continental competition is set to again be enlivened after the last two editions were held partly or totally behind-closed-doors.Restictions in both Scotland and Wales had caused some to call for the relocation of the tournament to a single location, but with those now lifted it is full speed ahead.The six teams will battle across five rounds in February and March, with the tournament likely to be decided in the traditional denouement on “Super Saturday” in what could...
RUGBY・1 DAY AGO
The Independent

England captain Owen Farrell will miss the whole of the Six Nations, it has been confirmed.Head coach Eddie Jones confirmed at the tournament launch on Wednesday morning that his skipper suffered a “freak” injury to his ankle in Saracens training that requires surgery.Farrell’s injury follows similar concern around wing Jonny May while prop Joe Marler has withdrawn from the squad after testing positive for Covid.The 30-year-old has not played since injuring his other ankle during the win over Australia at Twickenham in November.He was set to return for Saracens on Sunday before suffering this setback. A spokesman confirmed they expect...
RUGBY・1 DAY AGO
newschain

Harlequins have announced scrum-half Danny Care has signed a new deal. Care, 35, will extend a 16-year-career with Quins, having made 321 appearances since joining from Leeds and become the club’s record try scorer. The latest contract announcement by the reigning Gallagher Premiership champions follows the likes of full-back...
RUGBY・1 DAY AGO
The Independent

Ireland captain Johnny Sexton is raring to go for the Six Nations after overcoming injury and a bout of coronavirus.The influential fly-half suffered knee and ankle damage during his country’s statement win over New Zealand in the autumn and was then struck down by a Covid-19 infection.Sexton starred on his first start since the All Blacks triumph, helping Leinster beat Bath 64-7 in the Heineken Champions Cup on Saturday after coming off the bench in his province’s 89-7 win over Montpellier the previous weekend“I had a frustrating couple of months, post the New Zealand game,” said the 36-year-old. “But thankfully...
WORLD・1 DAY AGO
newschain

Brentford forward Bryan Mbeumo has signed a new contract that will keep him at the club until summer 2026. The 22-year-old Frenchman joined the Bees, who have an option to extend the deal for an additional year, from Troyes two and a half years ago. He has played 119 games...
PREMIER LEAGUE・1 DAY AGO
The Independent

Jonny May’s participation in England’s Six Nations hinges on a visit to a specialist this week, with the Gloucester wing set to miss at least the opening two rounds.An ongoing knee problem has got progressively worse, resulting in his absence against Perpignan on Saturday and subsequent withdrawal from Eddie Jones’ 36-man training squad.May has been an ever-present under Jones since 2017 and is an influential member of the backline, creating a highlights reel of spectacular tries, but he now faces a race against time to involved in England’s title quest.The February 26 showdown with Wales at Twickenham is the earliest...
RUGBY・2 DAYS AGO
The Independent

Worcester’s incoming rugby director Steve Diamond says he is confident of fielding a “highly-competitive squad” that will be “respected” in the Gallagher Premiership.The former Sale Sharks boss will succeed Alan Solomons, who retires from coaching in June, at the end of this season on a two-year contract.Worcester who also announced that head coach Jonathan Thomas has left Sixways with immediate effect, appointed Diamond in a rugby consultancy role two months ago.📑 Club Statement.— Worcester Warriors (@WorcsWarriors) January 25, 2022And, while he will remain in that capacity for the remainder of this campaign, Diamond also immediately takes charge of Worcester’s...
RUGBY・2 DAYS AGO
The Independent

A superb century from captain Heather Knight helped England fight back on day two of the women’s Ashes Test, but the tourists still trail Australia by 102 runs with only two first-innings wickets in hand.Knight stood up for her team when most others struggled, scoring 127 not out in Canberra after number nine Sophie Ecclestone offered great support in an unbeaten 66-run partnership.A captain’s knock ensured England closed the day on 235 for eight, after Australia had earlier declared on 337 for nine with Katherine Brunt adding two wickets during the first hour of play to finish with a five-wicket...
SPORTS・44 MINUTES AGO
The Independent

A football team’s doctor has helped to save a second fan’s life after they fell ill while watching a match.Play was stopped for nine minutes at the Blackburn Rovers v Middlesbrough Championship match at Ewood Park after a home supporter needed urgent medical attention.Physios from the away team joined Boro team doctor Dr Tom Prichard, an Accident and Emergency consultant, in racing to the scene of the incident in the Jack Walker stand, near the Middlesbrough dug out.Earlier this season, Dr Prichard raced to save a fan’s life at Newcastle United’s St James’ Park ground, where he is a season...
SOCCER・2 DAYS AGO