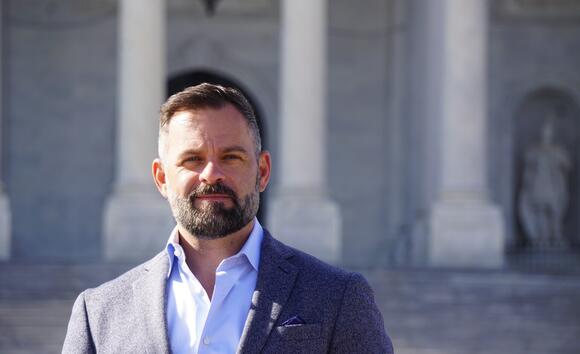 When the story of the 2022 midterm elections is finally told, it could be that it motivated a generation of military veterans horrified by the botched withdrawal from Afghanistan to enter politics.

Enter Republican Cory Mills, a House candidate in Florida’s 7th Congressional District. Mills, 41, saw combat in Iraq and Afghanistan, serving the Army’s 82nd Airborne Division as a member of a special operations unit. Later, Mills went to work in the Defense Department under former President Donald Trump. In an interview with the Washington Examiner , Mills ticked off the usual list of partisan motivations behind his bid for Congress that is sure to excite GOP primary voters: President Joe Biden is failing as a leader; the liberal agenda propagated by the Democrats on Capitol Hill is damaging the United States — domestically and overseas.

“Right now, we’re running on an America last agenda,” said Mills, a recipient of the Bronze Star. “We’re prioritizing illegals over our military.”

“We’re seeing certain things, such as the cancellation of the Keystone XL pipeline while allowing Russia to build more pipelines,” he added. “These are things that I don’t believe in any way [constitute] an America first agenda.”

But Mills was particularly passionate when fielding questions about the chaotic U.S. military withdrawal from Afghanistan. Mills said he was horrified by the swift takeover by the Taliban and anguished over the Afghans left behind who assisted the American war effort during 20 years of conflict precipitated by the Sept. 11, 2001, terrorist attacks.
“I agree with the conditions-based agreement for withdrawal that President Trump had in place,” Mills said. “I was for the idea of withdrawing from Afghanistan.”

However, Mills said he does not support the concept of complete withdrawal. He worries the U.S. faces a new terrorist threat because there are no American forces in Afghanistan to prevent al Qaeda from reestablishing a foothold there from which to plan and launch attacks. Mills is doubly concerned about China filling the vacuum left by the American exit from the region and putting the U.S. on the defensive, geopolitically, in the competition for influence and power with a rising Beijing.

China made overtures to the Taliban and moved to establish a presence in Afghanistan from almost the moment the last American plane lifted off from the airport in Kabul.

“It would have been smart for us to leave a small counterterrorism force in place,” Mills said. “I don’t think we should have handed over Bagram [Air Force base] to the Chinese.”

Mills, a first-time candidate for public office, and his wife, Rana, run a Florida-based risk management firm they founded together that employs hundreds of people and advises law enforcement and other organizations. If Mills wins his Republican primary in late August of next year, next up would be Democratic Rep. Stephanie Murphy. Although redistricting could alter the boundaries of the 7th Congressional District, under the current lines, Mills would face an uphill climb. In 2020, Biden defeated Trump there by more than 10 percentage points.

If Mills ends up in Washington in 2023 as a member of Congress in a new Republican majority, he has not decided whether he would back House Minority Leader Kevin McCarthy of California to become the next speaker of the House, even though at this point he could be the only Republican candidate running for the gavel. “It’s kind of a tricky question because we don’t know who’s going to be placing their hat in the ring,” Mills said.

“My focus is not about who’s going to be speaker and who’s not; my focus is on defeating Stephanie Murphy,” Mills said. “It’s about us taking back America, that’s my focus right now. How we deal with leadership … that’s further down the road.”

Though I thank you for your service. I question your ability to lay blame on one man when the Afghanistan fiasco was 29 years in the making

President Joe Biden is reviewing plans to deploy thousands of troops and military equipment to fellow NATO nations ahead of a potential Russian invasion of Ukraine.
MILITARY・12 HOURS AGO
WashingtonExaminer

As Gov. Glenn Youngkin promised a "new day" in Virginia, former President Donald Trump was in a small prison town in Arizona relitigating the past.
POTUS・1 DAY AGO
WashingtonExaminer

US sending weapons to Ukraine and pulling Americans out

Adam Laxalt isn’t overpromising. The Nevada Republican, his party’s leading candidate for Senate in the Silver State, offered a modest menu of agenda items he plans to pursue should the GOP win a majority of seats in the chamber in the midterm elections. Topping the list? Using control of the floor, and key Senate committees, to conduct aggressive oversight of President Joe Biden and his administration. Laxalt also would encourage the Republican majority he hopes to usher in to look deeper into the Russia investigation that consumed Washington during most of former President Donald Trump’s term.
PRESIDENTIAL ELECTION・21 HOURS AGO

The district backed Bacon in 2020 but voted for Democrat Joe Biden over Republican Donald Trump in the presidential election.
NEBRASKA STATE・4 DAYS AGO
Chicago Sun-Times

Pence has previously said that the decision in Roe v. Wade should be thrown on "the ash heap of history."
PRESIDENTIAL ELECTION・2 DAYS AGO
CBS News

Sheila Cherfilus-McCormick has won the race for Florida's 20th congressional district. She was heavily favored to win the election, since the district leans blue. She is filling a seat that was left vacant by Congressman Alcee Hastings, who died in April 2021. CBS News political associate producer Aaron Navarro joined CBSN's Lilia Luciano to discuss.
FLORIDA STATE・13 DAYS AGO

US puts 8,500 troops on heightened alert amid Russia tension

At President Joe Biden's direction, the Pentagon is putting about 8,500 U.S.-based troops on heightened alert for potential deployment to Europe to reassure allies amid rising fears of a possible Russian military move on Ukraine.
MILITARY・10 HOURS AGO
WashingtonExaminer

Members of Congress are weighing in on the increasing military threat Russia poses to Ukraine, with some demanding sanctions to deter Russian President Vladimir Putin and others seeking information from the Biden administration or steps to secure the region.
FOREIGN POLICY・10 HOURS AGO
WashingtonExaminer

NATO announced on Monday that it was reinforcing Eastern Europe with additional ships and fighters.
MILITARY・18 HOURS AGO
Newsweek

On Sunday the GOP lawmaker was asked about a proposed plan shared in the Trump White House to seize voting machines after the 2020 election.
CONGRESS & COURTS・1 DAY AGO

The United States is weighing sending as many as 5,000 troops to NATO allies in the Baltic and Eastern Europe as concerns mount that Russia might invade Ukraine, US media reported Monday. The possible deployment could involve 1,000 to 5,000 troops, along with naval vessels and aircraft, according to the New York Times. It said the number could rise sharply if conditions deteriorate. CNN said the Pentagon is identifying which units would go but that the final decision to deploy them has not been taken.
MILITARY・16 HOURS AGO
POLITICO

At issue are documents connected to John Eastman's work at Chapman University.
CONGRESS & COURTS・4 HOURS AGO
The Guardian

Two million stopped while illegally entering US from Mexico in 2021

More than 2 million migrants were stopped while attempting to enter the United States from Mexico illegally in 2021, an astronomical figure resulting from the Biden administration's easing of border policies and collapsed economies in Latin America due to the pandemic.
IMMIGRATION・10 HOURS AGO

Senate Judiciary Committee member Lindsey Graham, R-S.C., told Fox News that earlier Friday he met with former President Donald Trump and that the two had a frank discussion about the state of the country. Graham told "Hannity" that both agreed President Biden has been a disaster as commander-in-chief, and that...
POTUS・3 DAYS AGO
Palm Beach Daily News

Senators Marco Rubio and Rick Scott take offense when called out for dishonesty, particularly over voters' rights. And yet they obligate us to do so. Not only did our Florida senators join their 48 GOP colleagues in lockstep against the John Lewis Voting Rights Advancement Act and the Freedom to Vote Act this week but they actively railed against the bills, whose only goals were to advance democracy for all, regardless of skin color or political party.
FLORIDA STATE・2 DAYS AGO
The Free Press - TFP

Today, Governor Ron DeSantis announced Florida’s military and defense industry supported more than 860,000 jobs in 2020 and Florida experienced a 12 percent increase in direct defense spending from $44 billion in 2018 to $49.3 billion in 2020. According to the recently published 2022 Florida Defense Industry Economic Impact...
FLORIDA STATE・5 DAYS AGO
tucson.com

PHOENIX — An Apache Junction lawmaker who continues to question the outcome of the 2020 presidential race now wants to represent southeast Arizona in Congress. “Anybody who knows me, knows that my heart has been down in the southern part of the state anyway,” Republican state Sen. Kelly Townsend told Capitol Media Services on Monday. “That’s where I go for leisure, and that’s where I go to work.”
ARIZONA STATE・7 DAYS AGO