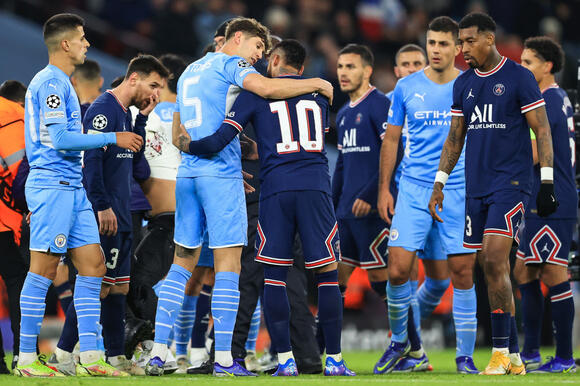 Pep Guardiola's side inflicted a third defeat on the Ligue 1 side in the calendar year, as goals from Raheem Sterling and Gabriel Jesus sealed the points for the hosts after Kylian Mbappe's strike had given PSG the lead.

Manchester City have now clinched top spot in Group A following the win, ensuring qualification to the knock-out stages of the Champions League for the ninth season in a row.

The Sky Blues will now turn their attention back to the Premier League at the weekend, as they face the high-flying West Ham side that knocked them out of the Carabao Cup in October.

But before then, here are five things City Xtra learned from the proceedings on a memorable night at the Etihad Stadium!

1. No De Bruyne, No Foden, No problem for Pep Guardiola

With Kevin De Bruyne isolating after testing positive for COVID-19 last week, Manchester City knew they were missing one of their best players against one of the favourites to the win the Champions League.

Moreover, it was revealed that Phil Foden and Jack Grealish were not fit to make the matchday squad against PSG, which should've made the task on hand even harder for Pep Guardiola and Co.

However, the Sky Blues played to their strengths by dominating the ball in the middle of the park using the likes of Bernardo Silva, Joao Cancelo, Ilkay Gundogan and Rodri - all of whom were nothing short of sensational against Mauricio Pochettino's side.

2. Raheem Sterling is back

Back amongst the goals, but more importantly, getting into the right positions and truly affecting proceedings week-in, week-out - Raheem Sterling has returned to form.

The England international showed great fight in attack and defence against PSG, as he caused havoc amongst the opposition backline while often tracking back and helping win back possession for his side.

After netting against Everton at the weekend, Raheem Sterling has made a case to be named in the line-up to face West Ham. Amid ongoing speculation surrounding his future, the 26-year-old is yet again starting to prove his doubters wrong.

This is the Raheem Sterling who will prove key to Manchester City for the rest of the campaign, and possibly even beyond.

3. Gundogan steps up again on the big stage

With De Bruyne missing out, the onus was on Ilkay Gundogan to command the midfield, and Manchester City's captain on the night delivered arguably his best performance of the season.

Gundogan controlled the tempo of play alongside Rodri and Bernardo Silva in midfield - a trio that has been pivotal to how Pep Guardiola's side have recovered from a relatively sluggish start to the campaign.

Gundogan, who has already made 14 outings this season, is almost undroppable for Pep Guardiola on current form, and though De Bruyne and Foden are yet to return to full fitness, the Germany international will seemingly take some stopping.

It's getting difficult to find fresh words of praise for the best Portuguese player in world by a country mile, Manchester City's Bernardo Silva.

Silva was once again running the show, running as if his life depended on the result of tie and setting the tone for the rest of his peers when on the ball - calm, efficient and most importantly, confident.

Not scared to go through a flurry of PSG midfielders and come out with the ball stuck to his feet like he didn't touch it, Silva is arguably the best and most consistent player in the world on current form, with few others deserving to challenge him for that title.

What's been particularly interesting about Manchester City's Champions League campaign is their resolve to get the job done one way or another, without an out-and-out striker to do the damage up top.

In previous seasons, Manchester City have often struggled to really put down a marker on the game despite the obvious quality they possess in all areas of the pitch.

Barring their 2-0 loss in Paris on matchday two of the group stage, Guardiola's men have been all over their opponents for large parts of the game - something that will give the squad a real boost in confidence as they once again make their way to the knock-out stages of Europe's most elite club competition.

With Kevin De Bruyne, Phil Foden, Jack Grealish and Ferran Torres yet to return to action, Manchester City will have plenty of ammunition in attack to make up for the absence of a recognised center-forward.

While Manchester City are yet to secure the final jewel in the crown of the club's modern era, the highly-coveted Champions League trophy, the club have greatly benefited from a decade of consecutive qualifications into the competition. Whether those benefits have been financial or simply the experience a club gains...
PREMIER LEAGUE・1 DAY AGO
CityXtra

Scoring his fifth Premier League goal in eight matches against Chelsea, Kevin De Bruyne proved to be the difference maker with an absolute belter of a strike in Manchester City's latest win at the Etihad Stadium that took them 13 points clear of the west London side in the league table.
PREMIER LEAGUE・2 DAYS AGO

In recent times, Manchester City’s academy has been lauded for all the right reasons. Phil Foden’s meteoric rise into becoming one of the most outstanding young players in Europe has been the finest example of the academy’s excellent work in terms of spotting local talent and taking their potential to the next level.
PREMIER LEAGUE・4 HOURS AGO
CityXtra

Gundogan is one of the most under-appreciated footballers, both on and off the pitch. The Germany international's performances tend to go extremely under-the-radar, despite how much of a crucial role he plays as Manchester City’s controller in the middle of the park. Off the pitch, Ilkay Gundogan has always...
PREMIER LEAGUE・2 DAYS AGO
CityXtra

The Ukrainian international is one of the biggest fan favourites at Manchester City, often hailed for his impressive versatility and steely determination since his arrival from FC Ufa in 2016. Oleksandr Zinchenko joined the club as a central midfielder, but was converted into the left-back role under Pep Guardiola’s tutelage,...
PREMIER LEAGUE・4 HOURS AGO
CityXtra

There are so many facets of football that make Pep Guardiola's Manchester City so great. They are experts in keeping possession, flawless in their build-up play, but it is one of the very basics of football that makes them such a relentless winning machine - their pressing. Telling a footballer...
PREMIER LEAGUE・2 DAYS AGO

Ever since Pep Guardiola's arrival in Manchester, he's not had many issues - but the left-back area has certainly been one. In 2016, the Catalan's options in that position were an ageing Alexsandar Kolarov and Gael Clichy. After a disappointing 16/17 campaign, the club decided to completely rejuvenate that area of the field.
PREMIER LEAGUE・2 HOURS AGO
CityXtra

Following Manchester City’s early elimination from the 2021/22 Carabao Cup, the Premier League champions are now set to have a two-week break after facing Southampton in the Premier League this weekend. It was originally reported by the Telegraph’s Mike McGrath that Pep Guardiola had planned a warm-weather training camp...
PREMIER LEAGUE・22 HOURS AGO
CityXtra

Speculation around the Ukrainian left-back's future at the Etihad Stadium has always painted an uncertain picture, almost ever since his arrival at the club in the summer of 2016 from FC Ufa. Oleksandr Zinchenko has been linked with potential moves to the likes of Newcastle United and Genoa in recent...
PREMIER LEAGUE・1 HOUR AGO
CityXtra

"During the Season, There Are Personal Problems" - Pep Guardiola Offers Insight into Challenges With Man City Stars Throughout Season

A Kevin De Bruyne special was enough to separate Manchester City and Chelsea at the Etihad Stadium on Saturday afternoon, as the gap between the hosts and the visitors in the Premier League table increased to 13 points. The 1-0 win was Manchester City's 12th Premier League win a row,...
PREMIER LEAGUE・2 DAYS AGO

Despite suffering a recent Coronavirus outbreak within the club, Manchester City have not stopped in their tracks, with commanding wins against Swindon Town in the FA Cup third round followed by Chelsea in the Premier League. Progressing to the Fourth Round of the FA Cup and sitting 11 points clear...
PREMIER LEAGUE・2 DAYS AGO
SB Nation

Chelsea lost a close — albeit drab — encounter against arguably the best team in the world, showing our usual defensive solidity and lack of offensive firepower. The team put out were designed to stop City from being their usual free-flowing selves and succeeded in the task but were not able to take advantage of the sparse offensive opportunities created.
PREMIER LEAGUE・1 DAY AGO
CityXtra

Manchester City's midfield gem Kevin De Bruyne seems to get better and better with each passing season, with his recent match-winning strike against Chelsea to open up a 11-point lead at the top of the Premier League the latest reminder that the Belgium international is back to his best. And...
PREMIER LEAGUE・1 DAY AGO
The Independent

Pep Guardiola has hailed the mentality and professionalism of his Manchester City players after taking a seemingly vice-like grip on the title race.The City manager is impressed by how his team have dealt with adversity on and off the pitch to maintain their charge towards a fourth Premier League success in five years.In making his point, Guardiola cited the example of full-back Joao Cancelo who suffered facial injuries in an attack at his home last month.Cancelo has started all three of City’s games since, helping them come through a tough period in which they have been badly hit by...
PREMIER LEAGUE・2 DAYS AGO
CityXtra

The west Londoners lost further ground in the race for the Premier League title as Kevin De Bruyne's sumptuous strike after 70 minutes sealed a 12th straight league win for Pep Guardiola's men at the weekend. With Liverpool closing the gap to Manchester City to 11 points (with a game...
PREMIER LEAGUE・2 DAYS AGO
CityXtra

The league leaders were at their assertive best against the European champions for the second time this campaign, as they capped off their league double over the visitors with a narrow triumph at the Etihad Stadium. The victory extended Manchester City's advantage over Chelsea in the table to a staggering...
PREMIER LEAGUE・2 DAYS AGO
CityXtra

Patrick Roberts’ steep £11 million signing from Fulham to Manchester City was met with several expectations, considering the youngster was one of English football’s most promising talents. However, a host of fruitless loan spells to the likes of Celtic, Girona, Norwich City, Middlesbrough, Derby County and Troyes...
PREMIER LEAGUE・2 DAYS AGO
CityXtra

From France: Manchester City Offered Chance to Sign PSG Defender as 'Option on the Bench'

The 29-year-old left-sided full-back has been the subject of intense speculation in recent weeks after being frozen out of Paris Saint-Germain's first-team since the start of the season. Manchester City's Premier League title rivals Chelsea emerged as a potential destination last Sunday, with the London outfit looking for solutions in...
PREMIER LEAGUE・21 HOURS AGO