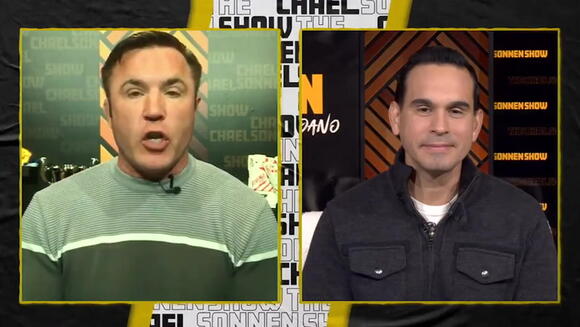 McGregor has lost twice to Poirier in 2021, knocked out by the American in the second round in January before suffering a broken leg at the end of the first round in July.

The Irishman is expected back in the ring in the first half of 2022, and coach Kavanagh spoke to Submission Radio about his compatriot’s recovery and impending return.

“He’s doing a lot of strength training at the moment. The guy is jacked. I think he’s coming back as a middleweight! But he’ll be back on the mats with me now shortly and we’ll start off with combat sports training again.

“I actually joked with him, I said: ‘Look, I’d rather if we just start off with some techniques, some drills, let’s see how you’re going.’ And he’s like: ‘No, I’m going to do [five five-minute rounds], that’s what I’m coming back to do.’

McGregor has been linked to potential bouts with former foes Max Holloway and Nate Diaz, and Kavanagh said: “He’s not so much about warm-up fights. He seems pretty warm to me as it is.

“So, what will come, will come. He’s got a hundred opponents lined up, it would appear, but let’s just get back training, let’s test the leg and test everything. When the time comes, I’m sure he won’t be short of choice [of opponents].

​Conor McGregor shared a bizarre video of himself flexing and posted a defiant message on social media after his pub was petrol bombed. McGregor's Black Forge Inn in Crumlin, Dublin, was targetted by criminals, with the venue struck by two petrol bombs. No damage was done to the premises as...
PUBLIC SAFETY・9 DAYS AGO
firstsportz.com

Conor McGregor’s pub in Dublin, Ireland was reportedly attacked by two individuals who threw petrol bombs at the pub. The pub has been under McGregor’s ownership since 2019 and always remains busy with customers. On Wednesday two people came in a scooter and threw the bombs and fled from the scene. Fortunately, the bombs didn’t hit the pub’s infrastructure or any customers.
PUBLIC SAFETY・9 DAYS AGO
MMAmania.com

Former UFC lightweight champion Conor McGregor was holding a special menu tasting event at his Black Forge Inn on Drimnagh Road in Dublin 12 on Wednesday night, when two men on scooters launched fire bombs at the establishment during a drive-by attack. McGregor, 33, was not on premises at the...
PUBLIC SAFETY・10 DAYS AGO
The Independent

A Dublin pub owned by Conor McGregor was targeted on Wednesday night, according to police, who confirmed they are investigating an “incident of attempted criminal damage”. Police attended the scene at the Black Forge Inn on the same night the UFC star reportedly hosted a taste-testing evening in the Irish capital. Social media posts from the former UFC champion confirmed that he had been at the venue on Wednesday. Police confirmed that no damage had been done to the pub as they called for witnesses. A spokesperson said: “Gardai are investigating an incident of attempted criminal damage at a...
PUBLIC SAFETY・10 DAYS AGO

Conor McGregor’s pub, The Black Forge Inn, was targeted by criminals with a petrol bomb late Wednesday but no damage to the building was done as well as no injuries to any patrons were sustained. McGregor bought the pub back in 2019 for a reported $2.2 million, and they...
PUBLIC SAFETY・10 DAYS AGO
fightsports.tv

An upscale pub in Dublin owned by former UFC dual champion Conor McGregor was the target of a pair of Molotov cocktails Wednesday. According to a report in The Mirror, The Black Forge Inn was targeted with “petrol bombs,” commonly referred to as Molotov cocktails – typically glass bottles filled with a gas and oil mixture, then thrown after a piece of cloth acting as a wick is lit.
PUBLIC SAFETY・10 DAYS AGO
ESPN

Police in Ireland are investigating an alleged attack on a bar owned by UFC superstar Conor McGregor, according to the establishment's management. Management of the Black Forge Inn in Dublin said in a statement that the alleged attackers "made an unprovoked effort to inflict damage" on the upscale pub Wednesday night. Per the statement, no patrons or employees were injured and no damage was done to the bar. McGregor was not there at the time of the alleged attack.
PUBLIC SAFETY・10 DAYS AGO

Conor McGregor could return to competitive action as soon as the summer of 2022, according to UFC president Dana White.The Irishman broke his tibia during his defeat to Dustin Poirier in June of last year, and has been recuperating since.White thinks that the recovery process is progressing well, and expects McGregor to be back in action before long.“I think so, yeah,” Dana told TMZ when asked if he expected the 33-year-old to fight at all in 2022. “He’s doing all the right things with his leg. I’m hoping he can come back this summer.”McGregor has been beaten in the three...
UFC・1 HOUR AGO
Insider

Francis Ngannou and Ciryl Gane fight for the UFC heavyweight title Saturday in Anaheim, and it will be like two wrecking balls colliding at speed.
UFC・2 DAYS AGO
Footwear News

Ahead of the UFC 270 this weekend, Dwayne “The Rock” Johnson’s Project Rock brand has been announced as the official footwear partner of UFC. Under the multi-year agreement, Johnson’s performance brand with Under Armour will provide footwear to all UFC athletes and their corner teams. The footwear will be a part of the athletes’ UFC Fight Kits and will be worn during all official UFC Fight Week activities, workouts, weigh-ins and more. “UFC athletes are amongst the greatest, toughest, focused, most disciplined and hardest training athletes on the planet,” said Dwayne Johnson in a statement. “I am proud, grateful and humbled that my...
CELEBRITIES・2 DAYS AGO
The Independent

If Francis Ngannou were to look in the mirror, he might just see an improbable green glint in the dark pools of his eyes.Maybe he can already picture the dollars, stacked much higher than his 6ft 3in frame and much wider than those granite shoulders.For it must be so enticing, the prospect of a crossover bout with the biggest name in boxing, especially for a phenomenon who is severely undervalued by his employers and who started fighting long before he set foot in a ring. Growing up in poverty in Cameroon, Ngannou began working in sand quarries at the...
UFC・2 DAYS AGO

Francis Ngannou is a fighting phenomenon: the honorary ‘baddest man on the planet’ as UFC heavyweight champion, and the most ferocious power-puncher in the promotion’s history.The French-Cameroonian’s professional mixed martial arts record stands at 16-3, while his UFC record is 11-2 since his debut in 2015 – with 10 of those wins coming via knockout or TKO.Ngannou, 35, in fact went 6-0 in the company, with five of those victories achieved via KO/TKO and one coming via submission, before he suffered back-to-back decision losses.The first of those two defeats was a humbling by then-champion Stipe Miocic, but Ngannou worked...
UFC・1 DAY AGO
The Independent

Francis Ngannou unified the UFC heavyweight titles in the main event of UFC 270 on Saturday night, beating interim champion Ciryl Gane via unanimous decision with a surprising wrestling display.Ngannou (17-3) is known for his hellacious knockout power and had never before won on points, but the French-Cameroonian scored multiple takedowns as he handed former teammate Gane (10-1) his first defeat as a professional mixed martial artist.Ngannou’s 16 previous pro wins had all come via stoppage, 12 of them via KO/TKO and most of them early in his fights. Against a much quicker and seemingly more technical opponent, the least...
UFC・1 DAY AGO
The Independent

Nick Kyrgios claims he was threatened by opponents’ coach

Nick Kyrgios has claimed he was threatened by the coach and trainer of his doubles opponents at the Australian Open on Friday.Kyrgios and his good friend Thanasi Kokkinakis pulled off one of the results of the tournament so far by defeating top seeds Nikola Mektic and Mate Pavic in the second round of the men’s doubles.It was another raucous atmosphere but the flash point appears to have been when Kyrgios hit one of the Croatian duo with the ball.😂😂 that was crazy!! Mans thought it was @ufc https://t.co/TCYCRCj3E5— Thanasi Kokkinakis (@TKokkinakis) January 21, 2022Kyrgios wrote on Twitter: “Just letting you...
TENNIS・2 DAYS AGO
The Independent

Tyson Fury has called out UFC heavyweight champion Francis Ngannou for a boxing match.Ngannou is set to defend his title against interim champion and former teammate Ciryl Gane this month, but the French-Cameroonian has expressed a desire to return to his boxing roots.Ngannou, 35, this week named Tyson Fury as one of his dream opponents, and the WBC heavyweight champion has now responded.“Who would like to see me fight this beast, boxing rules @ufc gloves?” Fury tweeted, alongside a mock-up poster of himself and Ngannou.The Briton also tagged Ngannou and UFC president Dana White in the tweet.Who would like...
UFC・1 DAY AGO
The Independent

Dreams of replicating the ferocious Mike Tyson drove Francis Ngannou in his unlikely journey to heavyweight glory.But while Iron Mike initially lit that fire inside him, his inspirational journey out of poverty and gruelling work at sand quarries eventually saw the Cameroonian transition to MMA after moving to Paris.His notorious power, which has inspired his destructive path to the top of the UFC somewhat belittles his craft. It obscures a newfound nuance to his game that was beautifully showcased in his rematch against Stipe Miocic 10 months ago.From a reckless brawler in love with his power at times, Ngannou, now...
UFC・1 DAY AGO
The Independent

Tyson Fury’s interest in a crossover bout with Francis Ngannou has not waned following the UFC heavyweight champion’s successful title defence against Ciryl Gane.Ngannou, widely considered to be the greatest power-puncher in UFC history, stunned fans and pundits on Saturday as he employed an unexpected wrestling gameplan to outpoint former teammate Gane in the main event of UFC 270.In doing so, French-Cameroonian Ngannou unified the heavyweight titles and handed interim champion Gane his first professional defeat.While Ngannou, 35, did not produce the kind of spectacular knockout that many felt he would need to win – and to boost interest in...
UFC・21 HOURS AGO
SPY

The first UFC fight night of 2022 is finally here. On Saturday, January 22, UFC will return with a highly anticipated Heavyweight Title fight between Francis Ngannou vs. Ciryl Gane. UFC 270 will take place at the Honda Center in Anaheim, California, and the earliest preliminaries will start at 6:15 p.m. EST. The main event is scheduled for 10:00 p.m. EST. If you want to livestream UFC 270 when it takes place tonight, then there’s only one option for streaming the fights: ESPN+ and the official UFC 270 pay-per-view event. We’ve got all of the information you need to watch UFC...
UFC・1 DAY AGO
The Independent

Jake Paul has suggested he will take an active approach in helping to improve fighter pay after Francis Ngannou’s purse was revealed following his successful heavyweight title defence at UFC 270. Ngannou, who has long expressed frustration over his pay in the UFC, retained his belt by outpointing former teammate Ciryl Gane in Saturday’s main event.It was then revealed that Ngannou had earned $600,000 for his outing in Anaheim, just days after the French-Cameroonian insisted he will no longer fight for that exact amount of money.YouTuber Paul has gone 5-0 as a professional boxer and has recently teased a UFC...
UFC・21 HOURS AGO