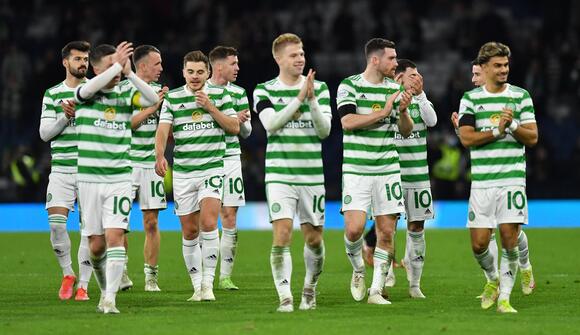 Celtic will look to keep their hopes of qualifying for the knockout stages of the Europa League alive when they visit Bayer Leverkusen tonight.

Ange Postecoglou’s side are in third place in Group G, one point behind Real Betis and four off leaders Leverkusen with two matches of the group stage remaining.

But the Hoops will be consigned to the Europa Conference League if they were to lose to the Bundesliga side and Betis defeat Ferencvaros, who are bottom with four defeats from four so far.

Celtic were thrashed 4-0 by Leverkusen in the reverse fixture in September, and a positive result in Germany would ensure the Scottish Premiership side could progress to the knockout stages with a home win over Betis in the final round.

Here’s everything you need to know ahead of the match tonight.

When is Leverkusen vs Celtic?

The match will kick off at 5:45pm GMT on Thursday 25 November.

It will be shown live on BT Sport 3, with coverage starting at 5:15pm. BT Sport customers can also stream the match live on the BT Sport website and mobile app.

Celtic will be under no illusions of the difficulty of the task at hand, but they are in great form and will be hopeful of taking advantage of the Leverkusen’s injury problems to secure what could be an important point. Leverkusen 1-1 Celtic

Ronaldo was also included in the World11 at the expense of Mohamed Salah, while the women's awards on the night faced backlash from current players.
FIFA・19 HOURS AGO
The Independent

Arsenal are optimistic their Carabao Cup semi-final second leg against Liverpool will go ahead as planned on Thursday night.The Gunners successfully appealed to the Premier League to have Sunday’s north London derby away to Tottenham called off in the absence of a number of players.Injuries, suspension, coronavirus cases and losing players to the Africa Cup of Nations saw Mikel Arteta’s ranks depleted enough for the league to postpone their scheduled fixture.However, the PA news agency understands there have been no additional Covid-19 cases in the past two days and a couple of players are now likely to be fit following...
PREMIER LEAGUE・16 HOURS AGO
Sports Illustrated

Robert Lewandowski took home his second straight award, but one star competitor left him off the ballot completely.
UEFA・1 DAY AGO

Thomas Tuchel says Chelsea need to “recharge the batteries” after blaming tiredness for their lacklustre performance in the 1-1 Premier League draw at Brighton The European champions’ fading title hopes suffered another setback after Hakim Ziyech’s first-half opener was cancelled out by stand-in Albion skipper Adam Webster.Chelsea topped the table as recently as the start of last month but have spectacularly fallen out of contention having now won just two of their nine top-flight outings since.Blues boss Tuchel once again bemoaned his club’s punishing schedule and now plans to give his players two days off ahead of Sunday’s home game...
PREMIER LEAGUE・7 HOURS AGO
The Independent

Ralf Rangnick has no concerns about selecting Paul Pogba during the final months of his Manchester United contract, even if the midfielder’s only motivation to play well is to earn a deal at another club.Pogba has entered the final six month of his current Old Trafford terms, with little progress made in discussions over a renewal and a departure on a free transfer in the summer considered likely.The 28-year-old is yet to make an appearance under interim manager Rangnick after suffering a thigh injury while on international duty in November, though returned to full training on Monday.Rangnick expects Pogba...
PREMIER LEAGUE・8 HOURS AGO

Cristiano Ronaldo is expected to be available for Manchester United's trip to Brentford though will have to come through Tuesday's training sesssion at Carrington, Ralf Rangnick has said.Ronaldo and Marcus Rashford were left out of United's match day squad for Saturday's 2-2 draw at Aston Villa, missing their second consecutive game despite Rangnick expecting both to return.The United interim manager said both players were ruled out of making the trip to Villa Park after Friday's late training session but says both are currently in contention to play Brentford."Cristiano and Marcus were training yesterday so I suppose they will be training...
PREMIER LEAGUE・18 HOURS AGO
San Diego Union-Tribune

Follow live updates from the Fifa Best Awards as the as the men’s and women’s player of the year are crowned in Zurich. Lionel Messi, Mohamed Salah and Robert Lewandowski are up for the men’s award, which is being handed out one month on from the Ballon d’Or. Messi was the winner on that occasion, beating Lewandowski to the prize, after a 2021 which saw the Argentina star claim a first major international honour with his country at the Copa America. He also won the Copa del Rey and finished as La Liga’s top scorer with Barcelona on his last...
PREMIER LEAGUE・1 DAY AGO
vavel.com

New Orleans Pelicans vs Boston Celtics Live Stream, How to Watch on TV and Score Updates in NBA Season

One of the earliest Premier League games to fall foul of COVID-19 is set to be played on Wednesday with Tottenham travelling to the East Midlands to face Leicester. The match was initially due to take place on December 16 only to be scuttled by a late increase in positive tests with the Foxes.
PREMIER LEAGUE・11 HOURS AGO
The Independent

Romelu Lukaku is right, he is not an easy fit in Chelsea’s system

It is tempting to wonder what might have been if, at the start of the second half at the Etihad on Saturday, the only shot on target that Chelsea managed all afternoon had been placed around the onrushing Ederson rather than easily within his reach. Maybe Thomas Tuchel would have taken more positives from the performance, maybe Manchester City would even have lost, maybe there would still have been a sliver of intrigue for us to savour in the final four months of this Premier League title race.Maybe Romelu Lukaku would have taken the first step on his long road...
PREMIER LEAGUE・1 DAY AGO
The Independent

Kevin De Bruyne insists there can be no easing up now after firing Manchester City closer to another Premier League crown with a superb winner against Chelsea.The Belgian playmaker produced a moment of magic 20 minutes from time to settle a tight battle between the title rivals at the Etihad Stadium on Saturday.It was a potentially decisive blow in the race, lifting the champions 13 points clear of the Londoners at the top of the table.Regardless of whether Liverpool can cut into the lead – the Merseysiders have played fewer games and still have to visit City – it would...
PREMIER LEAGUE・2 DAYS AGO
The Independent

Brighton host Chelsea in the evening kick-off at the Amex Stadium with the second Premier League meeting between the sides in just three weeks. Danny Welbeck cancelled out Romelu Lukaku’s opener in the reverse fixture at Stamford Bridge before new year.And Graham Potter’s side arrive in good form, though they could only draw 1-1 with Crystal Palace despite dominating large spells of the match.This game is being played tonight due to the European champions’ commitment to play in the Club World Cup, shifting from the original 8 February date, a move that Thomas Tuchel is struggling to come to terms...
PREMIER LEAGUE・11 HOURS AGO