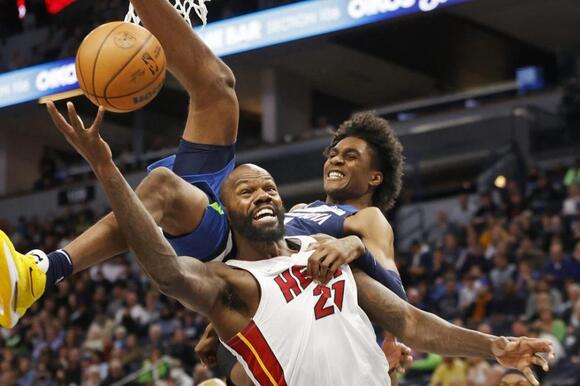 Anthony Edwards had 33 points and a career-high 14 rebounds as the Minnesota Timberwolves won their fifth straight game, beating the visiting Miami Heat 113-101 on Wednesday.

Malik Beasley made five 3-pointers and scored a season-high 29 points for Minnesota, which has won five in a row for the first time since 2018. D’Angelo Russell scored 20 points and Jarred Vanderbilt had eight points and grabbed a season-high 15 rebounds.

Miami trailed by four heading into the fourth quarter and cut the deficit to 102-99 before guard Kyle Lowry fouled out with 5:29 remaining.

Minnesota responded with nine straight points and moved ahead 111-99 when Jaden McDaniels scored with 2:25 left.

Lowry recorded seven points, six rebounds and five assists for the Heat, which fell to 1-2 on its four-game road trip. 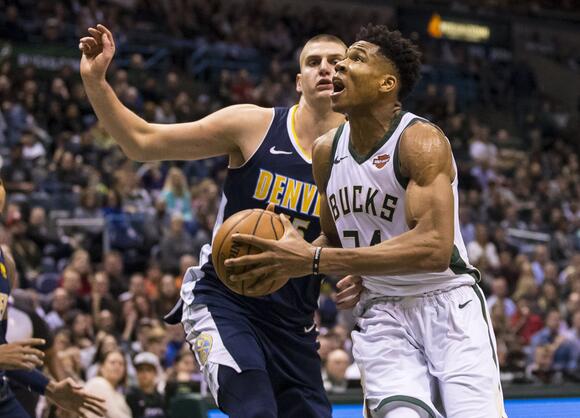 Karl-Anthony Towns, who finished with 11 points and six rebounds, headed to the bench after picking up his third foul with 7:28 left in the first quarter and did not return in the first half.

Edwards and Beasley scored nine points apiece in the opening quarter to give Minnesota a 30-27 lead.

Adebayo scored 14 points in the first half for Miami, which held a 62-54 advantage at the break.

The Wolves outscored Miami by 12 in the third quarter and moved ahead 86-82 on Russell’s 3-pointer with 1.2 seconds left in the period.

Minnesota forward Patrick Beverley exited in the first quarter with a left leg injury and did not return.

ATLANTA — Everything was going just fine for the Timberwolves early in their 134-122 loss to the Hawks. The Wolves were rolling offensively and had built a double-digit lead that they maintained at halftime. Then in the third quarter it all went wrong in spectacular, frustrating fashion. Anthony Edwards...
NBA・1 DAY AGO
Minneapolis Star Tribune

Timberwolves proud of effort vs. Knicks; Anthony Edwards praises Tom Thibodeau in his own way

NEW YORK – The wheels came off for the Timberwolves, they let go of the rope, whatever metaphor they have used in the past, that's what was happening in the third of quarter of what turned out to be a 112-110 Wolves win over the Knicks. The Wolves had...
NBA・1 DAY AGO
nbcsportsedge.com

Editor's Note: There has never been a scoreless NBA game, yet PointsBet is offering $125 in free bets to anyone using the code NEWYEAR, who places a $1 bet on any NBA game in which at least one point is scored. Just a single point. Go to PointsBet.com or download the app today, enter the code NEWYEAR to get in on the action.
NBA・1 DAY AGO
Sportsnaut

Bookmark. Save. Do your thing. We will be providing constant updates on this page as it relates to the biggest
NBA・2 DAYS AGO

NBA power rankings: Now that the NBA season is in full swing, it’s time to rank all 30 teams. With
NBA・1 DAY AGO
FanSided

While the Boston Celtics have been on somewhat of a hot streak through the first half of January, winning six of their10 games played thus far into 2022, for the most part, it has appeared as though with every positive step forward this team takes they end up following it up by then taking two steps back and now, as a result of Wednesday’s underwhelming loss to the Charlotte Hornets, they find themselves back to boasting just a measly .500 record of 23-23.
NBA・8 HOURS AGO
Audacy

The Detroit Pistons reportedly offered Jerami Grant, Saddiq Bey, Kelly Olynyk and a first-round pick for Ben Simmons, but Daryl Morey and the Sixers brass were not moved by it.
NBA・2 DAYS AGO
fadeawayworld.net

Lakers Fans Blast Team After Getting Beaten By Pacers: "Please Trade LeBron Out Of Respect."

The Los Angeles Lakers have recently lost to the Indiana Pacers 104-111, and there is no doubt that this was a game that they should have won. This was certainly a disappointing loss for a team that was looking to build momentum. LeBron James once again had a fantastic performance...
NBA・19 HOURS AGO

Multiple franchises across the NFL are searching for their new head coach. For the Las Vegas Raiders, they have an interesting situation as Rich Bisaccia has proven to be a solid coach after filling in for Jon Gruden. Regardless, the Michigan Wolverines seem to believe their current head coach Jim Harbaugh is chomping at the bit to head to Vegas.
NFL・1 DAY AGO
Sportsnaut

With the 2021-22 season now going strong and the Milwaukee Bucks looking to repeat as champs, it’s time to update
NBA・22 HOURS AGO
Sportsnaut

Bookmark. Save. Favorite. Do your thing. This is the one-stop-shop for everything NBA schedule-related heading into the 2021-22 season: Get
NBA・12 HOURS AGO

Five-star quarterback transfer Jaxson Dart is one of the most highly-sought-after prospects in the 2022 portal. And on Wednesday, he made an interesting visit to a prospective school. According to reports from On3 Sports, the now-former USC signal caller traveled to his hometown of Provo, Utah to visit with the...
PROVO, UT・1 DAY AGO
FastBreak on FanNation

Klay Thompson and the Golden State Warriors beat the Detroit Pistons on Tuesday night.
NBA・1 DAY AGO
All Hawks

The Hawks got a big win in Atlanta on MLK Day.
NBA・2 DAYS AGO
USA TODAY