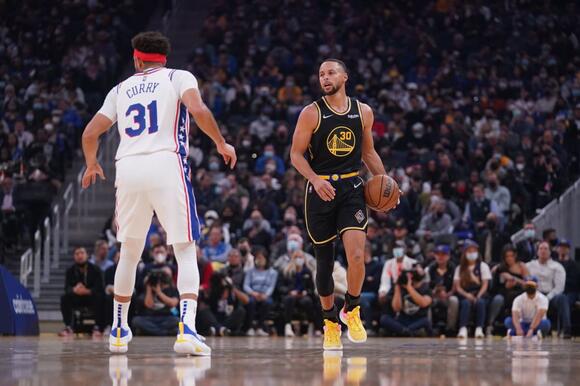 Steph Curry had a great play against his brother during Wednesday's game between the 76ers and Warriors.

The Golden State Warriors are hosting the Philadelphia 76ers on Wednesday night, which means that one of the best matchups in the NBA is taking place.

Steph is the older brother of Seth, and he had a fantastic move on his little brother during the game.

The two brothers have gone up against each other many times in the NBA, and even went head-to-head in the 2019 Western Conference Finals when the Warriors swept the Portland Trail Blazers.

Steph was the ninth overall pick in the 2009 draft out of Davidson, and Seth went undrafted out of Duke in 2013.

More on the Philadelphia 76ers can be read here.

Moments after the most prolific 3-point shooter in NBA history left a meeting Tuesday night to get a jersey of his to give to the Pac-12’s leading scorer, that freshman barely could contain her mix of gratitude and joy. “Now my life’s complete,” Cal’s Jayda Curry said....
NBA・2 DAYS AGO
FastBreak on FanNation

Steve Kerr made a hilarious joke about Steph Curry after the Golden State Warriors beat the Dallas Mavericks.
NBA・2 DAYS AGO
NBC Sports

Amid a sluggish stretch in which Steph Curry is slumping, Jordan Poole is adjusting, and Klay Thompson still is finding his sea legs, the Warriors might have found the key to unlocking their offensive identity. On Tuesday, during their 130-92 thrashing of the Dallas Mavericks at Chase Center, the Warriors...
NBA・2 DAYS AGO

These are the 2022 NBA All-Star starters

The 2022 NBA All-Star Game is coming to Cleveland, and it will again feature the biggest stars in professional basketball. The starting lineups and captains for the game were revealed during an NBA on TNT broadcast, and some familiar faces will again be front and center when the All-Star Game tips off on Sunday, Feb. 20 at Rocket Mortgage FieldHouse.
NBA・1 DAY AGO
All 76ers

The Philadelphia 76ers are slowly getting guys back in the mix after dealing with a long season of injuries and COVID-related setbacks so far. For the last couple of weeks, the Sixers have missed Danny Green and Shake Milton. And over the last handful of games, Matisse Thybulle and Seth...
NBA・1 DAY AGO
Canis Hoopus

It was shaping up to be the perfect storm for the Minnesota Timberwolves. Former Timberwolves disappointment, Andrew Wiggins, got the national nod as an all-star game starter over the likes of Defensive Players of the Year, Rudy Gobert and Draymond Green, as well as a pair of Wolves, Anthony Edwards and Karl-Anthony Towns. The latter two had to wait just 2.5 hours before they could prove in a nationally televised game that they deserved the spot over Wiggins.
NBA・1 DAY AGO
numberfire.com

Philadelphia 76ers point guard Seth Curry (ankle) has been ruled out of Thursday's game against the Los Angeles Lakers. Curry continues to deal with an ankle injury and will remain sidelined for Thursday's clash with Los Angeles. His next chance to play will come against the Sacramento Kings on Saturday.
NBA・2 DAYS AGO

Why is Steph Curry in worst shooting slump of his career?

Steph Curry staked his biggest claim to being the greatest shooter in NBA history earlier this season, when he eclipsed Ray Allen’s record for career 3-pointers. Perhaps not coincidentally, he has struggled to live up to that exalted status ever since. Among the many plausible reasons for Curry experiencing...
NBA・1 DAY AGO
NBC Bay Area

SAN FRANCISCO -- Make that four straight wins for the Warriors after their ugly overtime loss to the Indiana Pacers, exactly one week ago. The latest win was a 124-115 victory over the Minnesota Timberwolves at Chase Center. They now are 5-1 on their seven-game homestand, which ends Saturday night against the Brooklyn Nets.
NBA・1 DAY AGO
FanSided

Warriors: How Steph Curry solved his own shooting slump

Golden State Warriors guard Steph Curry solved his own shooting slump. We shouldn’t expect anything different from the best shooter of all-time. Curry broke out of his shooting slump in a big way against Minnesota on Thursday night, thanks to six three-pointers. Steph looked more like the MVP frontrunner we assumed him to be earlier this season, launching shots from near-halfcourt with incredible confidence.
NBA・9 HOURS AGO
Insider

Austin Reaves looked confused, and perhaps frustrated, as he tried to follow LeBron James' instructions during Tuesday's win over the Nets.
NBA・2 DAYS AGO

On the anniversary of Kobe Bryant's death, here’s a look how the NBA legend invested the money that he earned on and off the court
NBA・2 DAYS AGO
USA TODAY

Kareem Abdul-Jabbar addressed comments by fellow Hall of Famer John Stockton after Gonzaga took away his season tickets over refusal to wear mask.
NBA・2 DAYS AGO
The Spun

Nets Have Reportedly Made Decision On James Harden

There’s been a lot of talk this week about James Harden’s future in Brooklyn, with many speculating that the All-Star guard will end up in Philadelphia this offseason. Harden is rumored to be unhappy in Brooklyn, with his eyes potentially on a new team heading into the summer.
NBA・2 DAYS AGO
Black Enterprise

In what is being billed as a first, an active NBA player will also double as a commentator and content provider when not performing his regular job duties on the basketball court. WarnerMedia announced that Golden State Warriors forward Draymond Green is joining the on-air staff of Turner Sports, TNT,...
NBA・19 HOURS AGO
FastBreak on FanNation

Kyrie Irving of the Brooklyn Nets sent out two tweets on Wednesday morning.
NBA・2 DAYS AGO
FastBreak on FanNation

The New York Knicks lost to the Miami Heat in Florida on Wednesday evening.
NBA・1 DAY AGO
hypebeast.com

Los Angeles Lakers powerhouse LeBron James has officially is returning to his home state of Ohio for the 2022 NBA All-Star games. This year’s selection marks the 18th consecutive year that James has been chosen to be an All-Star starter. He also ties Kobe Bryant for being selected second-most in the history of the league. The two are one behind Kareem Abdul-Jabbar who is a 19-time All-Star starter.
NBA・1 DAY AGO
fadeawayworld.net

Kyle Kuzma is one of the NBA's most interesting personalities, Kuz's outfits and his outspoken confidence often draw the eye. Since his trade to the Washington Wizards, Kuzma's game has gone up a level and he is averaging over 15 points and nearly 10 rebounds per game. Now Kuzma is also receiving praise off the court for his recent gesture for his mother.
NBA・2 DAYS AGO