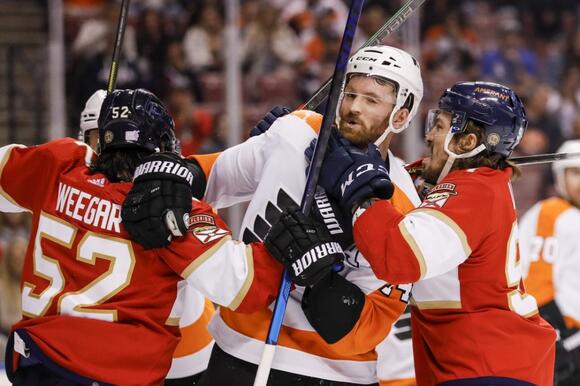 Aaron Ekblad scored with 2:21 left in overtime as the Florida Panthers tied the NHL record with 11 consecutive season-opening home victories, defeating the Philadelphia Flyers 2-1 on Wednesday night in Sunrise, Fla.

Jonathan Huberdeau and Sam Bennett logged assists on the winning goal. Bennett also scored for Florida, which tied the home-streak record set by the 1963-64 Chicago Blackhawks.

Joel Farabee scored for the Flyers, who took their season-high fourth consecutive loss (0-2-2). Philadelphia has scored just 19 goals in its past 12 games.

Panthers goalie Sergei Bobrovsky made 32 saves, improving his record against the Flyers to 17-5-1. Overall this season, Bobrovsky is 9-0-2.

The Panthers are now 3-0-0 since their best player, center Aleksander Barkov, went down with an injury.

Flyers goalie Martin Jones was outstanding, keeping the Panthers off the board for the first 43-plus minutes. He finished with 43 saves against the Panthers, who entered the night with the highest-scoring offense in the NHL.

Philadelphia Keith Yandle, a former Panthers defenseman, did not register a point. His team has an 0-2-0 record against the Panthers since Florida bought out his contract in July. 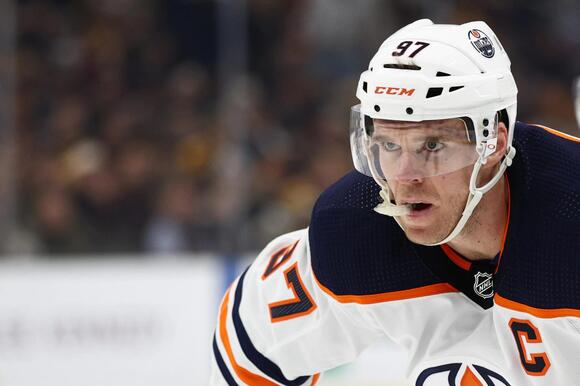 The Flyers opened the scoring with 7:33 expired in the first period. The sequence started with a Panthers two-on-one rush, but Huberdeau’s shot from the right circle was stopped by Jones.

Flyers winger Travis Konecny gathered the long rebound and whistled a stretch pass to Farabee, who made a couple of moves before slipping the puck between Bobrovsky’s pads.

The Flyers had a pair of chances to increase their lead after a first-period roughing penalty on Ekblad and a second-period call for unsportsmanlike conduct on Florida forward Frank Vatrano. However, the Panthers killed both penalties and finally got their first power-play opportunity 3:35 into the third as Nick Seeler was called for slashing.

Zach Parise scored the tiebreaking goal with 8:09 left in the third period Tuesday for the New York Islanders, who
NHL・51 MINUTES AGO
San Diego Union-Tribune

The NHL record for most consecutive games played has stood since 1987. But that record has now been tied, as
NHL・1 DAY AGO
Sportsnaut

The 2021-22 season continues to careen in the wrong direction for the Philadelphia Flyers. On Monday, the Flyers will look
NHL・2 DAYS AGO
Sportsnaut

Vegas Golden Knights winger Reilly Smith is one of the hottest names leading up to the NHL trade deadline. With
NHL・1 DAY AGO
USA TODAY

P.K. Subban said he felt accountability to call out recent racist actions in hockey because he has established a platform to inspire better behavior.
NHL・1 DAY AGO

The NHL season officially started back on October 12. In this article, we track all the NHL games today as
NFL・16 HOURS AGO
FastBreak on FanNation

Patrick Beverley has been ruled out for Sunday night's game between the Brooklyn Nets and Minnesota Timberwolves.
NBA・2 DAYS AGO
Sportsnaut

Now that the 2021-22 season is about half of the way through, and Covid is ravaging many clubs, it’s time
NHL・9 HOURS AGO
Chicago Tribune

The Pittsburgh Penguins are proving that it’s never wise to count them out. Not in games. Not in the chase
NHL・1 DAY AGO
San Diego Union-Tribune

Leon Draisaitl had two goals and two assists, Evan Bouchard also scored twice and the Edmonton Oilers came from behind to snap a seven-game losing streak with a 5-3 victory over the Calgary Flames
NHL・2 DAYS AGO
Itemlive.com

This past week, the Boston Bruins honored Willie O’Ree by retiring his No. 22 and lifting it high into the TD Garden rafters. But that is not enough. O’Ree was The post Minton: The NHL needs to retire Bruins legend Willie O’Ree’s number appeared first on Itemlive.
NHL・1 DAY AGO
San Diego Union-Tribune

Sebastian Aho's second goal of the game 3:49 into overtime gave the Carolina Hurricanes a 4-3 victory over the Vegas Golden Knights after blowing a two-goal lead late in regulation
NHL・25 MINUTES AGO
93.7 The Fan

It’s the worst team in the Western Conference & even though they’ve played better of late, can the Pens keep their focus tonight against Phil Kessel and mates
NHL・6 HOURS AGO
CBS LA

NEW YORK (AP) — Adam Fox scored the deciding goal in the sixth round of a shootout and the New York Rangers beat the Los Angeles Kings 3-2 on Monday night for their ninth win in 12 games. Chris Kreider got his NHL-leading 30th goal, Barclay Goodrow also scored and Artemi Panarin had two assists as New York won its fifth straight at home. Igor Shesterkin stopped 28 shots to pick up his 20th win of the season. Blake Lizotte and Alex Iafallo scored in the second period for Los Angeles. Jonathan Quick stopped 34 shots as the Kings lost for the...
NHL・1 DAY AGO