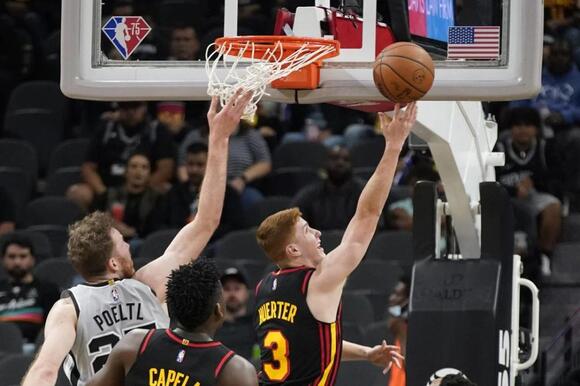 Trae Young scored 31 points and dished out 11 assists and keyed an early third-quarter run that broke open the game as the visiting Atlanta Hawks steamrolled the San Antonio Spurs 124-106 on Wednesday to capture their sixth straight contest.

The Hawks led by seven points at the half and stretched that advantage to 17 by midway through the third period. Young had 10 points in that pivotal stretch and scored 17 of his points after halftime as Atlanta dominated in the second half and won on the road for just the second time this season.

Bryn Forbes led the Spurs with 23 points while Dejounte Murray added 22 points, 11 assists and eight rebounds, and Jakob Poeltl and Keldon Johnson scored 15 points each. Poeltl also grabbed 10 rebounds for San Antonio, which has lost six straight games and is off to its worst start since the 1996-97 season.

The Spurs led by as many as seven points in the first quarter thanks to Murray’s 13 points before two baskets by Young in the final 39.6 seconds evened the game at 27 at the end of the period. The game went back and forth in the second period before the Hawks took a 55-54 lead on Bogdanovic’s 3-pointer at the 3:24 mark and pushed their advantage to 65-58 at the half as Young again hit two late baskets.

Murray led all scorers with 15 points at the half, with Poeltl adding 12 and Forbes contributing 11 points off the bench for the Spurs. San Antonio stayed close thanks to 13 second-chance points.

Young had 14 points at the half for Atlanta while Bogdanovic hit for 10. The Hawks outshot San Antonio 53.1 percent to 43.4 percent over the first two quarters. 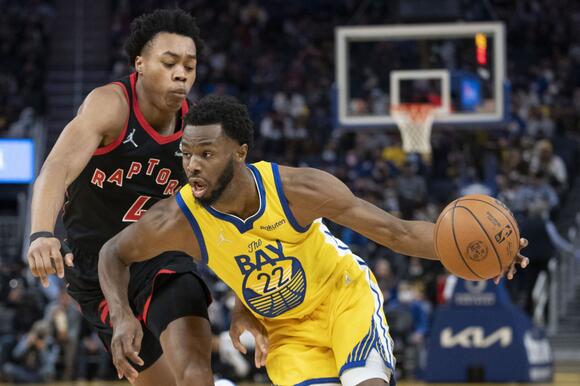 Atlanta took charge of the game in the first half of the third quarter, as Young hit for 10 points and assisted on a dunk by Capela to help the Hawks go up 84-67 by the 6:12 mark.

BOSTON (CBS) — The Celtics are taking a flyer on injured center Bol Bol while also getting closer to avoiding the luxury tax. The Celtics have reportedly reached a three-team deal with the San Antonio Spurs and Denver Nuggets that will bring Bol and PJ Dozier to Boston. In the deal, which was first reported by ESPN’s Adrian Wojnarowski late Tuesday night, Boston is sending Juancho Hernangomez to San Antonio while Denver is receiving Bryn Forbes from the Spurs. Hernangomez was barely playing for the Celtics, so the move is mostly to shed his nearly $7 million salary to help Boston...
NBA・16 HOURS AGO
Sportsnaut

The Hawks got a big win in Atlanta on MLK Day.
NBA・2 DAYS AGO
FastBreak on FanNation

Deandre Ayton is ruled out for the game between the Phoenix Suns and San Antonio Spurs on Monday.
NBA・2 DAYS AGO

It doesn't get any better than this.
NBA・2 DAYS AGO
All Hawks

Hawks are struggling with chemistry

Sam & Greg were joined by Terrell Thomas from These Urban Times to talk about the struggling Atlanta Hawks. He sees the issue as a clear lack of chemistry.
NBA・2 DAYS AGO
Sportsnaut

NBA power rankings: Now that the NBA season is in full swing, it’s time to rank all 30 teams. With
NBA・8 HOURS AGO

The Milwaukee Bucks have three players ruled out for the game against the Atlanta Hawks on Monday.
NBA・2 DAYS AGO
Sportsnaut

The Atlanta Hawks (18-25) got an improbable win on Monday over the Milwaukee Bucks despite trailing by double-digits in the fourth quarter. They did so by tightening up on Giannis Antetokounmpo and getting six turnovers out of Khris Middleton. With their matchup against the Minnesota Timberwolves on Wednesday, they’ll need to extend that defense to the perimeter.
NBA・10 HOURS AGO
news9.com

Murray Has Triple-Double As Spurs Roll Past Thunder, 118-96

Dejounte Murray had 23 points, 14 assists and 10 rebounds, and the San Antonio Spurs made 15 3-pointers as they rolled past the Oklahoma City Thunder 118-96. It was Murray’s eighth triple-double of the season and 12th of his career. Doug McDermott scored 20 points and Devin Vassell had 19 for San Antonio.
NBA・1 HOUR AGO

ATLANTA -- Trae Young scored 23 of his 37 points in the third quarter, sparking Atlanta's comeback, and the Hawks beat the Minnesota Timberwolves 134-122 on Wednesday night. Led by Young, who had 14 assists, the Hawks opened the second half with a 20-2 run after the Timberwolves led 73-61 at halftime. Minnesota's biggest lead was 16 points in the first quarter.
NBA・1 HOUR AGO
NBA Analysis Network

The Atlanta Hawks just completed a comeback over the Milwaukee Bucks on Monday night. Unfortunately, they still sit fairly comfortably in 12th place in the Eastern Conference. However, that is only the beginning of their issues ahead of the NBA trade deadline. According to recent NBA rumors, power forward John...
NBA・1 DAY AGO
ClutchPoints

LeBron James and Magic Johnson engaged in a bit of an indirect back-and-forth on Twitter over the weekend. Following the Los Angeles Lakers blowout loss to the Denver Nuggets on Saturday, the Hall of Fame point guard sent out a critical tweet calling out the Lakers’ effort. Less than...
NBA・1 DAY AGO
Audacy

The Detroit Pistons reportedly offered Jerami Grant, Saddiq Bey, Kelly Olynyk and a first-round pick for Ben Simmons, but Daryl Morey and the Sixers brass were not moved by it.
NBA・1 DAY AGO
Sportsnaut

With the 2021-22 season now going strong and the Milwaukee Bucks looking to repeat as champs, it’s time to update
NBA・1 HOUR AGO
ESPN

Rajon Rondo has been ruled out for Monday's game between the Brooklyn Nets and Cleveland Cavaliers.
NBA・2 DAYS AGO