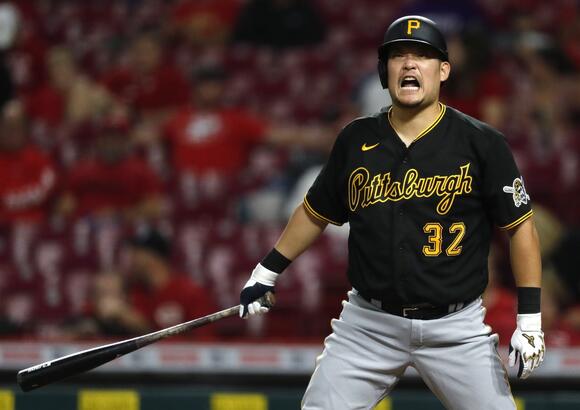 PITTSBURGH (93.7 The Fan) – Pirates are retaining a free agent from this past season. OF/1B Yoshi Tsutsugo will return for one year, $4 million as first reported by Jason Mackey of the Post-Gazette and confirmed by Audacy MLB Insider Jon Heyman.

The former Japanese star signed with the Pirates in mid-August after earlier opportunities with the Rays and Dodgers.  The left-hand hitter played in 43 games with 144 at bats with 8 home runs, 25 RBI, 8 doubles and a .347 on-base percentage with the Bucs.

Tsutsugo would have a chance to win the starting right-field job and/or battle with Colin Moran for reps at first base.

Frequent Buck Showalter collaborator Brian Butterfield was briefly considered for a role on the Mets’ coaching staff but was turned down for his refusal to get vaccinated.
MLB・2 DAYS AGO
92.3 The Fan

Were the Tampa Bay Rays onto something when they put tried to split their season between Florida and Montreal? Brian Anderson says no. Hear why when he joined Baskin and Phelps!
NFL・2 DAYS AGO
Sportsnaut

Person
Jon Heyman
Inside The Dodgers

Arizona vs Colorado
MLB・1 DAY AGO
Inside The Phillies

Inside the Phillies fielded mailbag questions while the MLB lockout is in full force.
MLB・2 DAYS AGO
Cleveland.com

CLEVELAND, Ohio – For the second straight season, Browns GM Andrew Berry must deal with more free agency decisions on defense than offense. Five players are on expiring one-year contracts. Two others are at the end of their rookie deals. The group includes four main starters who played at...
NFL・2 DAYS AGO

Justin Turner began the 2021 season batting .305 with 29 homers, 50 RBI, and a 1.088 OPS over 84 games. Then he was selected to play in the All-Star Game for the second time, and it appeared as if the Dodgers made a brilliant move in signing him to a 2-year deal with a team option in the previous ...
MLB・1 DAY AGO
FanSided

Three weeks from when pitchers and catchers usually report and no one knows when spring training will start or if it will be a truncated schedule.
MLB・1 DAY AGO
Inside The Phillies

After a disappointing 2021 campaign, what are the Phillies' options with Didi Gregorius?
MLB・1 DAY AGO

A polarizing figure throughout his career, A-Rod ranks fourth on the all-time home run list, but was suspended for violating MLB's drug policy.
MLB・2 DAYS AGO
angelsonparade.com

LAFC added to their goalkeeping depth today. The club announced they have signed free agent goalkeeper — formerly of Inter Miami — John McCarthy. The deal is through the 2022 season, with a club option for 2023. “John brings great MLS experience to our Club and will provide...
MLS・2 DAYS AGO
The Baltimore Sun

In less than a month, Orioles pitchers and catchers are scheduled to report to Sarasota, Florida, to mark the start of spring training. Yet, there remains uncertainty as to whether that will happen as planned with the league’s owners continuing to lock out the players as the two sides plod toward a new collective bargaining agreement. But as the lockout marches on, so too does Oriole of the ...
MLB・3 HOURS AGO
Inside The Phillies

Jean Segura doesn't put up flashy numbers or make dazzling defensive plays, but all together he is one of the most well-rounded players in the National League.
MLB・19 HOURS AGO
Inside The Dodgers

The MLB and MLBPA are set to meet on Monday to continue CBA negotiations.
MLB・22 HOURS AGO
Inside The Blue Jays

Ahead of the January 25th Baseball Hall of Fame announcement, we look at five former Blue Jays on the ballot and their chances at induction
MLB・19 HOURS AGO
Inside The Dodgers

The left-handed hitter has a new coach to help him in the batting cages.
MLB・13 HOURS AGO