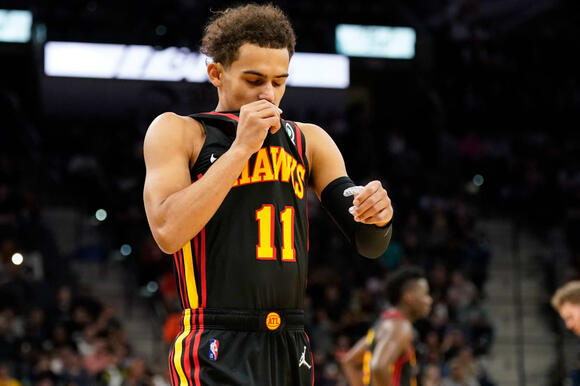 "Cancun on 3" is what the San Antonio Spurs would have said if this game were in early April. But since it's the day before Thanksgiving, I'm not sure what they say. Perhaps "Cranberry sauce on 3"? Either way, the sentiment is the same. On the heels of a players-only meeting, the Spurs laid an egg against the Atlanta Hawks.

The Hawks have now won six straight. They have successfully dug themselves out of the hole they created on the west coast road trip. Eight Hawks scored in double figures. The team shot a scorching 45-88 (51.1%) from the field and 12-26 (46.2%) from three. Not to mention, John Collins did his usual extraterrestrial things on the court.

But the game-ball has to go either Trae Young or Clint Capela. Let's start with the big man. Capela has been returning to form over the past few weeks, and tonight was a vintage Capela performance - 11 points, 13 rebounds, and 5 steals. His defense, rebounding, and I.Q. are why both Coach McMillan and Young have called him the team's anchor.

Speaking of the floor general, Young tallied 31 points, 11 assists, and 7 rebounds. One of the more impressive components of his stat sheet was that he only shot two free throws. Twenty-four of his points came from inside the three-point line, so it's pretty amazing that he didn't get fouled but one time...

After the game, Hawks coach Nate McMillan complimented the Spurs offense. "They do a good job of moving the ball. Almost like a passing-game offense that reverses that ball side-to-side. Our closeouts needed to be a little better, and I thought we did that in the second half."

McMillan pointed out areas where his team could do better, namely offensive rebounding. However, he did praise the chemistry of his young roster. "I just like the mindset that our guys have had really the past couple of days. I felt like our practices, we've been focused on what we need to do, what we need to clean up. We had a shootaround that was businesslike this morning."

Young took to the podium wearing a white Balenciaga hoodie and iced-out chain. His monster performance was overshadowed by an incredible act of kindness after the game. Young signed his game-worn shoes and gave them to a young fan decked out in Hawks gear.

When asked about it, Young said, "I saw that in warmups he had a big poster, a big sign saying that all he wanted for Christmas was my shoes. I knew if we won, I was going to do that for him and give him my shoes. It's an honor having fans in the building with my jersey on and people wearing my shoes and holding them up and little things like that. It's an honor, and I try to go out there and represent the best way I can."

The entire NBA has tomorrow off. The Hawks will be back on the road Friday against the Memphis Grizzlies. Thank you for your continued support of AllHawks.com . We hope you have a great Thanksgiving!

Ten Reasons for Hawks Fans to be Thankful

BOSTON (CBS) — The Celtics are taking a flyer on injured center Bol Bol while also getting closer to avoiding the luxury tax. The Celtics have reportedly reached a three-team deal with the San Antonio Spurs and Denver Nuggets that will bring Bol and PJ Dozier to Boston. In the deal, which was first reported by ESPN’s Adrian Wojnarowski late Tuesday night, Boston is sending Juancho Hernangomez to San Antonio while Denver is receiving Bryn Forbes from the Spurs. Hernangomez was barely playing for the Celtics, so the move is mostly to shed his nearly $7 million salary to help Boston...
NBA・1 DAY AGO
Argus Press

ATLANTA (AP) — After leading Atlanta to back-to-back wins for the first time in almost two months, Trae Young wasn't ready to say the Hawks have regained last season's winning formula. It's far too early to talk about a return to the Eastern Conference finals for the Hawks, who...
NBA・1 DAY AGO
FanSided

The Atlanta Hawks (18-25) got an improbable win on Monday over the Milwaukee Bucks despite trailing by double-digits in the fourth quarter. They did so by tightening up on Giannis Antetokounmpo and getting six turnovers out of Khris Middleton. With their matchup against the Minnesota Timberwolves on Wednesday, they’ll need to extend that defense to the perimeter.
NBA・1 DAY AGO
All Hawks

The Atlanta Hawks have their center of the future.
NBA・20 HOURS AGO

These five plays went viral on Wednesday night.
NBA・22 HOURS AGO
All Hawks

Everything you must know for the game in Atlanta.
NBA・1 DAY AGO
All Hawks

While the Boston Celtics have been on somewhat of a hot streak through the first half of January, winning six of their10 games played thus far into 2022, for the most part, it has appeared as though with every positive step forward this team takes they end up following it up by then taking two steps back and now, as a result of Wednesday’s underwhelming loss to the Charlotte Hornets, they find themselves back to boasting just a measly .500 record of 23-23.
NBA・19 HOURS AGO

Bookmark. Save. Do your thing. We will be providing constant updates on this page as it relates to the biggest
NBA・2 DAYS AGO
Audacy

A potentially major development occurred in the Los Angeles Lakers’ 111-104 loss to the Indiana Pacers on Wednesday. With 3:52 left in the fourth quarter, head coach Frank Vogel deployed Malik Monk onto the court, taking Russell Westbrook out of the game in crunch time — an adjustment rarely seen in the first half of the 2021-22 season. About four minutes earlier, L.A. had lost its lead that they held onto for the majority of the game.
NBA・12 HOURS AGO
97.1 The Ticket

As good as Grant has been for Detroit since signing a three-year, $60 million contract, he might not fit the timeline of the team’s rebuild.
NBA・2 DAYS AGO

The Sacramento Kings appear to be trying to make a move for both Ben Simmons and Tobias Harris, but the 76ers remain unmoved by any offers they’ve received.
NBA・1 DAY AGO
ESPN

Bulls star DeMar DeRozan remains in great position to start the All-Star Game. DeRozan continued to lead all East guards by a wide margin in All-Star fan voting in the latest returns released by the NBA on Thursday.
NBA・17 HOURS AGO
FastBreak on FanNation

Donovan Mitchell has been ruled out for the game between the Houston Rockets and Utah Jazz.
NBA・1 DAY AGO
95.7 The Game