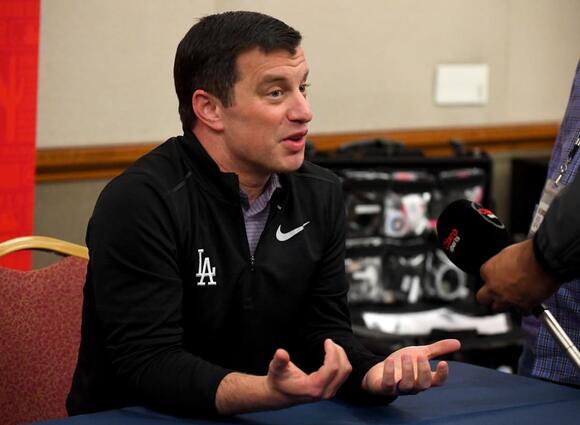 According to several sources, the Dodgers have signed right-handed pitcher Beau Burrows, and outfielder Jason Martin. It’s not yet confirmed, but Burrows' deal is presumed to be of the minor league variety, while Martins is a confirmed minor league contract.

You may recall that Burrows first 2020 appearance didn't go so well.

In the last two years, Burrows has a 10.70 ERA in 17.2 innings pitched at the major league level for the Detroit Tigers and Minnesota Twins combined. Considering he's shown some progress at the minor league level, 3.79 ERA over 122 appearances including 108 starts, the organization may feel he needs more time at the triple-A level to continue to really fine-tune his control in preparation for the big leagues.

With All-Star Shortstop Carlos Correa in the midst of free agency, why would he change his representation?
MLB・2 DAYS AGO
Inside The Phillies

One of the first black superstars in Philadelphia Phillies history, today we remember the legendary career of Dick Allen.
MLB・1 DAY AGO
Inside The Dodgers

When it comes to the 2022 campaign, one of the most asked questions for Dodgers fans is what will become of starting pitcher Trevor Bauer. He's in his second year of a three-year, $102 million contract, but he was put on paid administrative leave last season after accusations of sexual assault ...
PASADENA, CA・25 DAYS AGO
Sportsnaut

Major League Baseball is expanding its use of robot umpires to call balls and strikes in Triple-A this upcoming season.
MLB・2 DAYS AGO

LA's lefty reliever is pitching to high schoolers to keep his arm loose and ready for the 2022 season amid the MLB lockout.
MLB・1 DAY AGO
WFAN Sports Radio

The Yankees landed three prospects in the Baseball America Top 100 on Wednesday, and also got three in Baseball Prospectus Top 101 released Thursday - but Jasson Dominguez, who was No. 87 in the BA rankings, was left out by BP.
MLB・2 DAYS AGO
San Diego Union-Tribune

Robot umpires have been given a promotion and will be just one step from the major leagues this season
MLB・2 DAYS AGO
105.7 The Fan

Baseball America released its annual preseason top 100 prospect rankings this week. The Baltimore Orioles had five players make the list with Adley Rutschman coming in at the top spot.
MLB・2 DAYS AGO

ST. PETERSBURG, Fla. (WFLA) – Rays ownership tried pitching the sister city plan with Montreal as a way to improve revenues, increase player payroll and keep the team in Tampa Bay long term. But Major League Baseball has called a third strike on the proposal that didn’t sit well with many Rays fans. “If it […]
MLB・2 DAYS AGO
Audacy

Frequent Buck Showalter collaborator Brian Butterfield was briefly considered for a role on the Mets’ coaching staff but was turned down for his refusal to get vaccinated.
MLB・1 DAY AGO
Inside The Dodgers

This is the last Five-Tool Newsletter before the results of the BBWAA Hall of Fame election are announced, so I’ll be revealing my hypothetical ballot today. Sure, it has no bearing on the actual process, but it’s fun. And as the lockout drags on, there aren’t too many better things to talk about. ...
NFL・1 DAY AGO
Sports Illustrated

The Dodgers have one of the longest and richest histories of getting players and turning them into big-league names. They've also shown an uncanny knack for being able to pluck guys from the international market and turn them into superstars. So when they announced their recent list of over 30 ...
MLB・2 DAYS AGO
dodgerblue.com

When the Los Angeles Dodgers signed Albert Pujols to a contract for the remainder of the 2021 season after he was released by the L.A. Angels last May, he already had several connections to the organization. One of them was third base coach Dino Ebel, who spent seven seasons with...
MLB・1 DAY AGO
Audacy

ESPN's Alden Gonzalez doesn't think that the Dodgers would be willing to sign Freeman to a long-term deal.
MLB・1 DAY AGO
Sportsnaut

The Cincinnati Reds are a part of MLB history, widely recognized as one of the most storied franchises in baseball.
NFL・1 DAY AGO
92.3 The Fan

Were the Tampa Bay Rays onto something when they put tried to split their season between Florida and Montreal? Brian Anderson says no. Hear why when he joined Baskin and Phelps!
NFL・1 DAY AGO
Inside The Dodgers