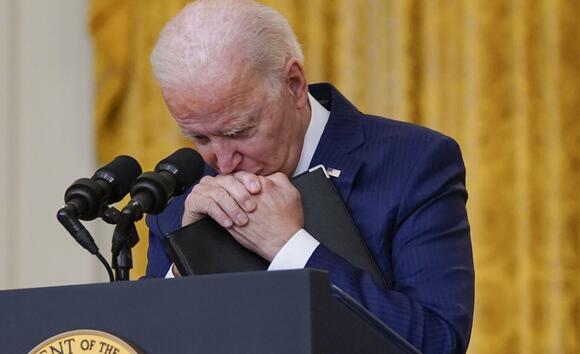 T he polyp removed during President Joe Biden's first colonoscopy in office was identified as a "tubular adenoma" that requires no further action, according to the White House physician.

A memo released Wednesday evening said the polyp, sent to a lab for a histologic examination, is similar to one Biden had removed in 2008.

An adenoma is a "benign, slow-growing but potentially pre-cancerous lesion," physician Kevin O'Connor said in his statement.

Although O'Connor said no further action is required at the time, his memo notes routine surveillance is recommended as well as a repeat colonoscopy in 7-10 years.

The White House released an earlier memo penned by O'Connor on Friday declaring Biden "fit for duty" following the completion of his annual physical earlier in the day. Biden weighed in at 184 pounds, and his height came in at 5 feet, 11.65 inches. His vital signs proved fairly virile for a 78-year-old. Biden had a blood pressure of 120/70.

O'Connor, who has been Biden's primary care physician for 13 years, said Biden was examined for his gait and frequent throat clearing, which the doctor said he had noticed worsen as Biden got older.

Biden's gait was determined to be degenerative "wear and tear" of his spine.

The president has a history of orthopedic and sports-related injuries that contributed to the wear on his spine but, according to a team of consulting physicians, was not enough to warrant any specific treatment. Biden's neurological exam further revealed "mild peripheral neuropathy in both feet," and while "he did not demonstrate any motor weakness," a "subtle difference in heat/cold sensation and great toe proprioception could be elicited."

The throat clearing was attributed to gastroesophageal reflux.

During his colonoscopy Friday, Biden was under general anesthesia and was temporarily unable to perform his duties as the president for roughly 85 minutes. During this time, Vice President Kamala Harris served as acting president, making her the first woman to hold presidential powers in U.S. history.

This guy definitely is incoherent. The doctor can lie, but we the people see it. This guy is a idiot along with his administration none can answer a simple question.

Mental Status is more concerning, he he he st stu stut stutters when he mumbles and rambles on and forgets what he's saying and looses focus during speeches!

Now get him a EKG on his brain and let's see the results. I bet his brain isnt right. Because the way he talks and thinks isnt right.

Mitt Romney: Biden has had '52 weeks of bad weeks'

Republican Sen. Mitt Romney did not hold back when criticizing President Joe Biden’s first year in office.
10 HOURS AGO
WashingtonExaminer

Biden: Texas synagogue attack 'was an act of terror'

President Joe Biden told reporters that the man who took four hostages at a Texas synagogue on Saturday night committed an "act of terror."
8 HOURS AGO
WashingtonExaminer

"Things are not going well," Romney said of Biden's tenure. "And the president needs to stop and reset and say what is it he's trying to accomplish?"
UTAH STATE・6 HOURS AGO

Former president Trump said that President Biden had made Dr. Anthony Fauci "like a king" during comments to supporters.
ARIZONA STATE・15 HOURS AGO
Newsweek

The MyPillow founder made the remarks at Trump's Arizona rally, where many speakers touted conspiracy theories about the 2020 election.
PRESIDENTIAL ELECTION・10 HOURS AGO
Newsweek

The Biden White House has forced the resignation of a Trump-appointed member of a U.S. commission who has promoted the baseless claim that the FBI planted agents among the pro-Trump mob that stormed the Capitol on Jan. 6. Darren Beattie was named by former president Donald Trump to the U.S....
PRESIDENTIAL ELECTION・2 DAYS AGO
Newsweek

His poll numbers continue to languish, though 45 percent of all voters said they "feel better" about him than they did about Trump.
PRESIDENTIAL ELECTION・11 HOURS AGO
Channel 3000

After Biden's first year, the virus and disunity rage on

From the inaugural platform, President Joe Biden saw American sickness on two fronts — a disease of the national spirit and the one from the rampaging coronavirus — and he saw hope, because leaders always must see that.“End this uncivil war,” he implored Americans on Jan. 20, 2021. Of the pathogen, he said: “We can overcome this deadly virus." Neither malady has abated. For Biden, it's been a year of lofty ambitions grounded by the unrelenting pandemic, a tough hand in Congress a harrowing end to an overseas war and rising fears for the future of democracy itself....
PRESIDENTIAL ELECTION・14 HOURS AGO

WASHINGTON (Reuters) - U.S. President Joe Biden will meet virtually on Friday with Japanese Prime Minister Fumio Kishida discuss the two nations' economies, security matters, climate change and other bilateral issues, the White House announced on Sunday. "The meeting will highlight the strength of the U.S.-Japan alliance, which is the...
FOREIGN POLICY・6 HOURS AGO
Fox News

Recent polls show between 57 and 60 percent of West Virginians approve of the moderate Democratic senator, despite Trump winning there by a double-digit margin.
PRESIDENTIAL ELECTION・2 DAYS AGO
Daily Mail

Republican Senator Mitt Romney tore into President Joe Biden and Democrats trying to pass federal voting rights legislation on Tuesday night, accusing them of undermining the 'reliability' of American elections in the process. The 2012 presidential candidate declared Biden was taking the same 'tragic road' as his predecessor Donald Trump...
PRESIDENTIAL ELECTION・4 DAYS AGO

DeSantis rips Biden as 'Brandon in the White House,' says 'he's not had a very good year'

Florida Gov. Ron DeSantis mocked President Biden in a podcast episode Friday, questioning the president's ability to do his job and giving a nod to the anti-Biden "Let's go, Brandon" chant. "All the problems you see with our country, and there's a huge amount of problems with Brandon in the...
FLORIDA STATE・2 DAYS AGO
WSAV News 3

WASHINGTON (AP) — Concerned but not giving up, President Joe Biden is anxiously pushing ahead to prod people to get COVID-19 shots after the Supreme Court put a halt to the administration’s sweeping vaccinate-or-test plan for large employers. At a time when hospitals are being overrun and record numbers of people are getting infected with […]
CONGRESS & COURTS・1 DAY AGO
WEHT/WTVW

The president and the health establishment, along with the news media, have a trust problem according to a new poll.
PRESIDENTIAL ELECTION・1 DAY AGO
Newsweek

Companies including Nike, Columbia Sportswear and Citigroup plan to fire unvaccinated employees, while JP Morgan Chase has signaled it may do the same.
U.S. POLITICS・3 DAYS AGO