How to keep your pumpkin pie from cracking 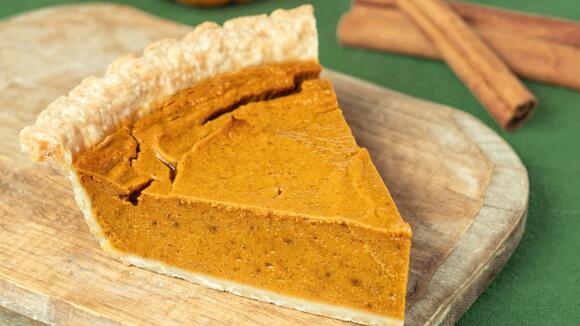 (NEXSTAR) – You followed all the directions from the recipe. You preheated the oven. You blind-baked the crust. Your fingers are stained orange from making your own pumpkin puree from scratch.

And what do you have to show for it? A fresh, lovingly baked pie … with a big ugly crack running down the center.

It doesn’t have to be this way. There’s a secret to baking a crack-free pumpkin pie, and Briana Carson cracked that code long ago.

Carson, the owner of Crave Pie Studio in Duluth, Georgia, has been whipping up pumpkin pies — and apple pies and pecan pies and strawberry rhubarb pies, etc. — for over a decade. But there was once a time when Carson was just a student, learning the perils and pitfalls of baking a pumpkin pie for her own family and friends in the rush before Thanksgiving.

“If you only make one pie a year, at Thanksgiving, when they’re already a million things going on, it’s going to be stressful and intimidating,” said Carson, whose Crave Pie Studio is currently listed as one of Thrillist’s top 25 pie shops in the country.

What stores are open on Thanksgiving 2021?

“For a custard like that, you want it to bake on a lower temperature,” says Carson, who bakes her pumpkin pies at 325 degrees F. (Convection ovens may require an even lower temperature, she says.) “You don’t want anything higher than that. Not on a delicate pie.”

Don’t be so strict about the baking times, either. If your pie is looking close to done, it’s time to take it out of the oven — no matter what the recipe says.

“You can go by the time on a recipe, but don’t let that be the last, the definitive indicator,” Carson said. “You need to look for the telltale signs that the pie is ready to come out. That means the edges should look firm, and the very, very center of it might be jiggly, but not sloshy. … After you take it out of the oven, that residual heat is going to continue to cook it.”

Once it cools, the top of the pie should look smooth, luscious, and free of splits, cracks or crevices. And even if it isn’t, you can always mask it with whipped cream. (Carson likes to blend hers with mascarpone for a “silkier, richer” topping.)

“I would just encourage people to try [baking pies] more often, and cook with the season,” Carson suggested for anyone still seeking pie perfection. “Maybe a sweet potato pie or whatever fresh fruit is from your region. You’ll get the hang of it.

For the latest news, weather, sports, and streaming video, head to KGET 17.

BAKERSFIELD, Calif. (KGET) — A lawsuit filed by the mother of an inmate who was killed and dismembered can proceed against a prison sergeant who placed the man in the same cell as convicted murderer Jamie Osuna. U.S. District Judge Dale Drozd ruled Tuesday it’s plausible to infer Sgt. Joseph Burns and other unidentified guards […]
BAKERSFIELD, CA・2 DAYS AGO
KGET

BAKERSFIELD, Calif. (KGET) — A lawsuit filed against Bakersfield Track Club after an attorney died while running a 5K in extreme heat has been dismissed after a settlement was reached. The Superior Court website says the suit filed by the family of defense lawyer Benjamin Greene has been formally dismissed after a settlement was reached […]
BAKERSFIELD, CA・3 DAYS AGO
thespruceeats.com

Nutrition Facts (per serving) (Nutrition information is calculated using an ingredient database and should be considered an estimate.) John Wayne Casserole is a delicious mix of ground beef, vegetables, pickled jalapeños, and cheese, all layered atop a biscuit crust. According to cooksinfo.com, this casserole gets its name because “Wayne directly contributed the recipe to a 1979 cookbook titled, “Cooking with Love from Cara and Her Friends”, compiled by Cara Connery. It is unknown where Wayne got the recipe from.” However, what is now known as John Wayne Casserole is quite different from the original recipe. It drops the eggs and adds a biscuit crust and ground beef but keeps the original southwestern inspiration by including the pickled jalapeños, tomatoes, and cheese.
RECIPES・25 DAYS AGO

17 cozy comfort-food dishes you can make in a slow cooker, according to chefs

Insider consulted chefs and cookbook authors about their favorite cozy, comforting slow-cooker meals to make in the fall and winter.
RECIPES・1 DAY AGO
LIVESTRONG.com

They may be a different color from regular beets, but white beets are cooked in the same ways, providing an appealingly different winter vegetable.
FOOD & DRINKS・2 DAYS AGO
The Independent

How to turn leftover banana skins into a delicious ‘pulled pork’ burger. No, really...

I saw people cooking with banana peel on the internet and I was intrigued – turns out it’s actually quite delicious if you prepare it in the right way,” says Miguel Barclay, author of the One Pound Meals cookbook series.“Banana peel is definitely something I would usually throw away, so technically this is free food.”Banana peel pulled porkMakes: 1 portionIngredients:1 banana peel½ tsp ground cumin½ tsp smoked paprika1 tsp demerara sugar (or other brown sugar)3 tbsp tomato ketchup1 soft bread roll1 tbsp coleslawOlive oilSaltMethod:1. Shred the banana peel using a fork, then pan-fry in a splash of olive oil over...
RECIPES・2 DAYS AGO
30Seconds

What is it with the Amish and delicious casserole recipes? While it may have a funny name, this traditional Amish Yumasetti casserole recipe is just a creamy, ground beef and noodles dish. Delish!. Cuisine: American. Prep Time: 5 minutes. Cook Time: 45 minutes. Total Time: 50 minutes. Servings: 6 to...
RECIPES・8 DAYS AGO

How to Make the Best Apple Custard Pie?

This is my ideal apple custard pie! The combination of ingredients is so good and right that you will be surprised by the delicious taste and smell this apple custard pie has. You will need around an hour and a half to make it and serve. Here is the recipe:
RECIPES・9 DAYS AGO
Mashed

How To Keep Pasta From Sticking, According To A Chef

Cooking pasta is a pretty simple process, but there can be hiccups if a few details are missed. Like when noodles stick to the pot, which is disappointing because you get less pasta and it's also tough to clean — you usually have to get in there and scrape it with a spatula or even your nails to free the straggler pieces. There's also the risk of the pasta sticking to itself. When you're excited to devour a comforting bowl of the Italian dish, there are few things more disappointing than realizing it has formed a giant clump.
RECIPES・11 DAYS AGO
ourcommunitynow.com

Tips to Keep Your Pipes From Freezing

Homeowners and apartment dwellers, here's how you can prevent pipes from freezing. If you just aren't familiar with preparing your home or apartment for winter, listen up! We've got some top tips to help you keep your water pipes from freezing and, ultimately, avoid a costly plumbing repair!. When water...
HOME & GARDEN・11 DAYS AGO
WOWT

OMAHA, Neb. (WOWT) - We’ve seen single-digit temperatures in Omaha this week. But one big concern anytime with the cold weather is keeping your furry friends warm. One solution may seem obvious but still very important. “One of the best thing you can do with pets in fringed weather...
OMAHA, NE・7 DAYS AGO

Southern Maryland Chronicle Recipe of the Week: A Twist on Traditional Burgers

(Family Features) Warm weather and grilling go hand-in-hand, and few dishes say summer like burgers. While traditional beef patties come to mind for many, there are also healthy protein options to satisfy that burger craving without sacrificing flavor. For example, salmon is a nutritionally well-rounded alternative that offers a variety of health benefits, and an […] The post Southern Maryland Chronicle Recipe of the Week: A Twist on Traditional Burgers appeared first on The Southern Maryland Chronicle.
RECIPES・2 DAYS AGO
WJLA

How to keep your pipes clear of unwanted clogs

F.H. Furr, your one-stop shop for all of your plumbing, heating, air conditioning, electrical, and indoor air quality needs, prides itself on being able to clear any clog. However, it would be best for your plumbing (and your wallet) to avoid clogs before they happen. Hair is a big culprit...
HOME & GARDEN・3 DAYS AGO
Real Simple

How to Keep Animals Out of Your Garden

Gardening is a rewarding hobby that can help reduce stress and anxiety while providing you with exercise and healthy produce. However, sometimes the furry neighbors in your yard decide that your garden is an all-you-can-eat buffet. Don't stress—figuring out how to keep deer and other animals out of your garden comes with the territory. Follow these tips on how to keep animals out of your garden, safely and humanely.
ANIMALS・5 DAYS AGO
GMA

Save your fork, there's pie!

SMELTERVILLE — Mae’s Market is making Smelterville sweeter, one slice of pie at a time since celebrating their grand opening right before Christmas. Owner LeMae Prentice said that she is thrilled to bring a new twist to the market, which for many years operated as the locally adored Wayside Market.
SMELTERVILLE, ID・12 DAYS AGO
Mashed

How To Save The Pie Dough You Forgot About

Baking pies, both savory and sweet, actually takes a little prep work if you are shying away from the pre-made Pillsbury dough and planning to make the pie crust from scratch. According to the New York Times Diners Journal blog, while pie dough doesn't need to be left in the refrigerator overnight or for a prolonged period of time, it does indeed need to be chilled before you bake it. Why? The blog explains chilling your dough helps the fats to solidify. This is going to give you the buttery, flaky crust your friends and family will rave about after each delicious bite.
RECIPES・14 DAYS AGO
arcamax.com

How to keep your dip, wings and guac from poisoning your Super Bowl party guests

No matter whether you’re at a Super Bowl party as host, NFL fan, commercials fan or person in a relationship with any of the above, you don’t want your post-game to involve getting sick from food or alcohol poisoning. That means knowing not only that veterans pace themselves...
NFL・11 DAYS AGO
WOWK 13 News

Half of Americans struggle cooking easy-to-make dishes — like pancakes and pasta!

Have trouble making pancakes? Apparently you're not alone.
FOOD & DRINKS・8 HOURS AGO