Jennifer Lawrence opens up about 'vanishing' from the Hollywood spotlight 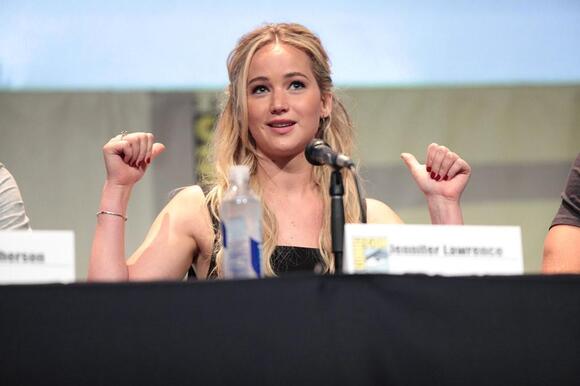 After being a Hollywood staple, Jennifer Lawrence vanished from the public eye following the release of "X-Men Dark Phoenix" in 2019.

Sure, the pandemic had something to do with that … in addition to the usual way our society treats Hollywood "it" girls, once it grows accustomed to the flavor. But in a recent interview with Vanity Fair , Lawrence opens up about some other reasons she chose to step away for a time.

Lawrence went from being a highly sought-after Oscar-winning actress to starring in less-than-successful films like "Passengers," "Mother!" and "Red Sparrow." The films were not only poorly received among critics, but commercially as well.

So then, why do it? As any workaholic would know, it's about so much more than money.

"I think that I was people-pleasing for the majority of my life," she went on. "Working made me feel like nobody could be mad at me: 'Okay, I said yes, we're doing it. Nobody's mad.' And then I felt like I reached a point where people were not pleased just by my existence. So that kind of shook me out of thinking that work or your career can bring any kind of peace to your soul."

Even friends noticed the toll it took on her. Justine Polsky, her best friend for 13 years, remarked that "the protocol of stardom began to kill her creative spirit, to fuck with her compass. So, she vanished, which was probably the most responsible way to protect her gifts. And sanity."

She concluded that "I didn't have a life. I thought I should go get one."

I don't think you need to be a famous, successful actress to understand that statement. The pandemic made many of us realize how much we let our lives revolve around work, until suddenly that part of our identities shifted drastically. 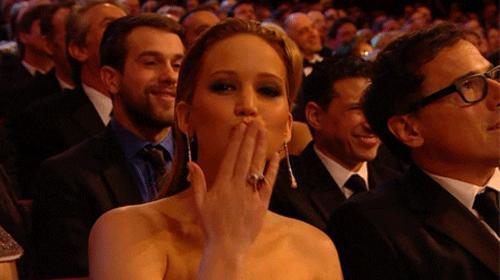 So, she got back to life, and in a big way. She married art gallerist Cooke Maloney and enjoyed the simple things … like grocery shopping.

"I really enjoy going to the grocery store with him. I don't know why but it fills me with a lot of joy. I think maybe because it's almost a metaphor for marriage. 'Okay, we've got this list. These are the things we need. Let's work together and get this done.'"

Maloney and Lawrence are even expecting a child together, though that aspect of her life will be kept (rightly so) under wraps.

"If I was at a dinner party, and somebody was like, 'Oh, my God, you're expecting a baby,' I wouldn't be like, 'God, I can't talk about that. Get away from me, you psycho!' But every instinct in my body wants to protect their privacy for the rest of their lives, as much as I can. I don't want anyone to feel welcome into their existence. And I feel like that just starts with not including them in this part of my work."

Jennifer's new movie, " Don't Look Up ," premieres December 10. As she returns to the spotlight, she carries the lessons many of us have learned after being removed from the hustle and grind: that sometimes the simplest things are the most joyous things, and that taking breaks helps bring our best self.

Watch: Jennifer Lawrence Debuts GOLDEN Baby Bump at "Don't Look Up" Premiere. Jennifer Lawrence may be used to being on camera, but when it comes to TikTok, she's perfectly fine with being just another viewer. Like many of us who have created an account at some point, the Don't Look...
BEHIND VIRAL VIDEOS・14 DAYS AGO
myq105.com

Jennifer Lawrence Is On TikTok, But Won’t Be Making Content

Jennifer Lawrence isn’t interested in getting in front of the camera on social media, but that doesn’t mean she doesn’t enjoy looking at other people’s content. The 31-year-old Don’t Look Up star recently revealed to Stephen Colbert that she’s among the many TikTok users who created a profile to be entertained, instead of entertaining. In a segment that aired on Tuesday’s (January 4) The Late Show, but was originally filmed when Lawrence appeared back in December, the actress took “The Colbert Questionert,” and answered 15 rapid-fire questions created by Colbert’s “scientists” to better know his guest.
BEHIND VIRAL VIDEOS・13 DAYS AGO
Well+Good

When it comes to comfortable shoes (and accessories in general), Jennifer Lawrence knows a thing or two about what looks to choose. Just a few months ago, the actress and mother-to-be inspired us all when she stepped out in a pair of casual Oofos sandals. Sure, the thick black slides are an interesting fashion choice, but their support and superior cushioning make them the recovery shoes we didn't know we needed. However, now that temperatures have dropped into icy territory, the brand’s slippers may be the next solution for your tired, chilly feet.
APPAREL・7 DAYS AGO
floydct.com

Jennifer Lawrence is on Tik Tok

Jennifer Lawrence is obsessed with TikTok. The ‘Don’t Look Up’ star - who is expecting her first child with husband Cooke Maroney - hates the fact she is hooked on the video-sharing social media platform but ruled out making her own dance trends on the app, or even participating in them.
BEHIND VIRAL VIDEOS・13 DAYS AGO

One of the trickier aspects of impersonating fallen Theranos founder Elizabeth Holmes is her deep-throated voice, but Jennifer Lawrence is set to take it on for the likely next film from her “Don’t Look Up” director Adam McKay, “Bad Blood.” The film is based on John Carreyrou’s 2018 nonfiction book “Bad Blood: Secrets and Lies in a Silicon Valley,” about the rise and fall of the multibillion-dollar Silicon Valley startup that set out to revolutionize blood tests but unraveled as Holmes was eventually convicted of four counts of wire fraud and conspiracy (out of 11 federal charges). Lawrence will be the...
MOVIES・1 DAY AGO
Cosmopolitan

Jennifer Lawrence Says It Was 'Really, Really Hard' Working With Jonah Hill on 'Don't Look Up'

If you've been on social media at all lately, even for a second, you'll have more than likely seen plenty of chatter surrounding Don't Look Up, which premiered on Netflix over Christmas. The movie has been the talk of the town (read: world) since it was released, not to mention because of its poignant message about climate change, but also its star-studded cast, which features Jennifer Lawrence, Leonardo DiCaprio, Meryl Streep, Jonah Hill, Timothée Chalamet, Ariana Grande and more.
MOVIES・5 DAYS AGO
Travel + Leisure

When an item is deemed the "best" in any category, it's sometimes just a matter of opinion. But when a style is celebrated by celebrities, like Jennifer Lawrence, Kacey Musgraves, and Rihanna — who also happen to represent a wide range of personal styles — and given five-star ratings by more than 100,000 Amazon shoppers, it's safe to say it truly is top-notch. So, if you're shopping for a winter beanie that promises to keep you warm and in style, look no further than this under-$20 knit hat from Carhartt.
BEAUTY & FASHION・1 DAY AGO
The Independent

Hollywood stars and members of the fashion industry have remembered “grand and soulful” Vogue editor-at-large Andre Leon Talley for his “charm and wit and taste for the exceptional” following his death at 73.The fashion trailblazer was a pioneer in magazines and on the front row of couture shows as a black man, and he became recognisable to those outside the industry for his role as a judge on reality show America’s Next Top Model.The former Vogue creative director, who worked side by side with editor Anna Wintour for decades until a fracture in their relationship, died in New York on...
BEAUTY & FASHION・12 HOURS AGO

Jordan Cashmyer, who appeared on “16 and Pregnant,” has died. She was 26. Cashmyer’s stepmother, Jessica Cashmyer, announced the news Sunday on Jordan’s father’s Facebook page alongside a black-and-white photo of the late reality star. “Last night I received a call no parent ever wants....
HOMELESS・2 DAYS AGO
GlobalGrind

Head inside for some awesome throwbacks and more recent shots, as we wish the icon a blessed day.
CELEBRITIES・6 DAYS AGO
Apartment Therapy

Tracee Ellis Ross loves a bold color, as evidenced by every outfit, beauty look, and accessory she’s ever worn. So it’s not too surprising that she fills her home with just as much color, and she’s officially making the case for painting just about every room in your house a different bold shade.
BEAUTY & FASHION・2 DAYS AGO
Variety

Hollywood Pays Tribute to André Leon Talley: ‘A Beacon of Grace and Aspiration’

Hollywood celebrities have to go through additional precautionary steps when working on a project amid the pandemic. This is especially true for actors and actresses, like Jennifer Aniston, who tape and film for movies and series while COVID-19 restrictions remain in place.
CELEBRITIES・7 DAYS AGO
Audacy

Jennifer Lawrence loves Miranda Lambert as much as we do

While making an appearance on The Late Show With Stephen Colbert, Jennifer Lawrence revealed just how much she loves Miranda Lambert and one of her deeper cuts.
CELEBRITIES・13 DAYS AGO
HollywoodLife

Britney Spears seemingly responded to her sister Jamie Lynn Spears’ latest podcast interview by sharing a shocking message that accused her family of not supporting her after she and Justin Timberlake broke up, and admitted his family was ‘all’ she ‘knew for many years.’. Britney Spears,...
TV SHOWS・1 DAY AGO
enstarz.com

Although Jennifer Garner and Ben Affleck appear to be cordial with each other after they got divorced, one report suggests that the former is reeling and "disgusted" with her ex's comments about alcoholism, which he blames her as the primary cause; could this be true?. According to a report published...
CELEBRITIES・8 DAYS AGO
Audacy

Betty White to be honored with a primetime special on NBC

Betty White would have celebrated her 100th birthday on January 17. NBC revealed that it will honor the American icon with a primetime special later this month.
CELEBRITIES・2 DAYS AGO
Upworthy

As the old saying goes, “If you can see it, you can be it,” but unfortunately, many children don’t see themselves adequately represented in the media. This subconsciously limits their perceptions of who they can be and what they can achieve in the world.
KIDS・8 DAYS AGO
Audacy

13-time ‘SNL’ host John Goodman bombed his audition for the show: ‘Oh God, it was awful’

Chatting on ‘The Tonight Show’ recently, ‘The Righteous Gemstones’ actor John Goodman recalls his horrible audition for ‘Saturday Night Live’ in 1980: ‘Oh god it was awful’
CELEBRITIES・1 DAY AGO