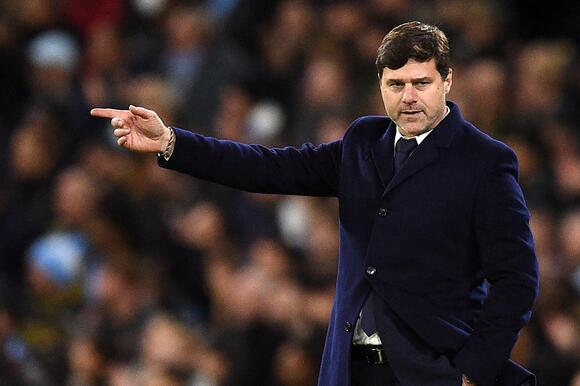 Pochettino’s side were beaten 2-1 by Manchester City at the Etihad in the Champions League on Wednesday as speculation swirled around whether the former Tottenham boss would be prepared to leave PSG mid-season.

The Argentine said on Tuesday that he is “happy” at the French club , who he joined in January 2021, but it understood that he is ready to quit PSG to join United before the summer, following the sacking of Ole Gunnar Solskjaer.

PSG were named favourites to win the Champions League following the signing of Lionel Messi this summer but the club have now won just two games out of five so far in the group stage following their defeat to City.

Carragher also said that PSG will not win the Champions League this season because they are carrying “three passengers” in Messi, Kylian Mbappe and Neymar , eluding to their lack of defensive work-rate.

“Pochettino has got to get out of that club,” Carragher told CBS . “If he has the chance to go to Manchester United, I would be gone tomorrow and it’s because of those 3 stars [Messi, Mbappe, Neymar].

“I just don’t believe that teams can carry anybody now. When I think of the four teams who I think can win the Champions League, Liverpool, Manchester City, Bayern Munich and Chelsea, they don’t carry a single passenger.

“[PSG] carry three. They’ve got no chance of winning the Champions League, absolutely no chance. I get frustrated watching them. I understand Messi because he’s 34, he has to serve himself for certain moments.

“But Mbappe is 22, he should be sprinting back to help his team defend against Manchester City. Not walking around the pitch, it’s not for me.

“I can’t accept that no matter how good you are, you don’t work for the team. The days of carrying passengers are gone.”

Ralf Rangnick would prefer to keep both Dean Henderson and Donny van de Beek at Manchester United beyond the end of the January transfer window, despite their desire for regular first-team football.Neither Van de Beek or Henderson have started a Premier League game for United this season, having been left on the sidelines by former manager Ole Gunnar Solskjaer and his interim successor Rangnick.The pair have made their feelings known to the United manager but have so far failed to secure a move away from Old Trafford, with Rangnick reluctant to let either go.Rangnick is having to contend with a...
PREMIER LEAGUE・2 DAYS AGO
The Guardian

Kevin De Bruyne scored a brilliant winner as Premier League leaders Manchester City moved 13 points clear with a 1-0 victory over second-placed Chelsea on Saturday.The Belgian playmaker, who had an unhappy spell at Chelsea early in his career, curled beyond Kepa Arrizabalaga from distance to settle a tight contest at the Etihad Stadium with 20 minutes remaining.It was a moment of magic worthy of winning any game but was the least City deserved having dominated against the side that beat them in last season’s Champions League final.Blue is the colour! 💙#ManCity pic.twitter.com/816nfRAo0M— Manchester City (@ManCity) January 15, 2022The win...
PREMIER LEAGUE・1 DAY AGO
San Diego Union-Tribune

Aston Villa rescued a 2-2 draw in the Premier League against Manchester United after mistakes led to both of the visitors goals.It was an awful start from Villa. Bruno Fernandes took a soft free kick and took his time to strike. When he did, it was a deft touch and goalkeeper Emiliano Martínez looked to have caught it. But he dropped it through his legs to put United ahead.Mason Greenwood had a few chances and Villa threw all they had at United in the closing minutes of the first half but heading into the break the visitors were still 1-0...
PREMIER LEAGUE・1 DAY AGO

Ralf Rangnick has encouraged Manchester United’s players to hold each other to account after Cristiano Ronaldo warned their poor season will continue if their mentality does not improve.Having edged past Aston Villa 1-0 in the FA Cup third round on Monday, the sides will go toe-to-toe once again in the Premier League on Saturday evening.United enter the weekend seventh in the standings after things unravelled following a positive summer in which Jadon Sancho Raphael Varane and Ronaldo arrived.The latter this week said they need to start afresh in 2022 and warned “it will be a nightmare” if they do...
PREMIER LEAGUE・1 DAY AGO
The Independent

Manchester City increased their lead at the top of the Premier League table to 13 points as Kevin De Bruyne’s strike earned the defending champions a 1-0 win over second-placed Chelsea. City dominated possession in the first half but Jack Grealish was denied an opening goal when Kepa Arrizabalaga blocked his shot with an outstretched leg. Romelu Lukaku went close after the break but saw a curling effort saved by Ederson. The hosts took the lead in the 70th minute when De Bruyne curled in an excellent strike past Kepa from outside of the box, Chelsea continued to struggle to...
PREMIER LEAGUE・1 DAY AGO
San Diego Union-Tribune

Aston Villa welcome Manchester United to Villa Park in the Premier League this afternoon. The fixture comes just days after the two teams met in the third round of the FA Cup, with Ralf Rangnick’s side holding on to a 1-0 victory after Scott McTominay stuck early. After a tumultuous first half of the season, United entered the weekend six points adrift of the top four, although Rangnick’s side do also have two games in hand. Follow Aston Villa vs Manchester United LIVEMeanwhile, Aston Villa have made an early statement of intent in the transfer market after completing the signings...
PREMIER LEAGUE・1 DAY AGO

Aston Villa host Manchester United in the Premier League this afternoon. United left victorious when the two sides met just a few days ago in the FA Cup third round after Scott McTominay struck the game’s only goal inside eight minutes. Ralf Rangnick’s side still have plenty of ground to make up in the league, though, with the club six points adrift of the top four heading into the weekend as Cristiano Ronaldo publicly urged his teammates to improve their attitudes. Follow Aston Villa vs Manchester United LIVEVilla have been showing their own intent in the transfer window with the...
PREMIER LEAGUE・1 DAY AGO
The Independent

You would think that after signing the Champions League’s all-time leading goalscorer, a four-time winner with Real Madrid and a 21-year-old prodigy who has played in its knockout stages twice already, Manchester United would be well on their way to achieving a top-four finish by now. If only it were so simple.This season was supposed to see the first serious title challenge at Old Trafford. It has instead resulted in Ole Gunnar Solskjaer’s departure, a bloated and unsettled squad, and the appointment of an interim manager who now has about four months to turn results around and meet the minimum...
PREMIER LEAGUE・2 DAYS AGO
Telegraph

Manchester United may have to move quickly to land Mauricio Pochettino this summer, with the Paris St-Germain manager sounded out by a Champions League rival about his availability at the end of the season. Pochettino is expected to come into the running at Old Trafford in five months time when...
PREMIER LEAGUE・1 DAY AGO
The Independent

Manchester United denied Birmingham City two wins on the bounce as they claimed a dominant 5-0 win in the Women’s Super League on Saturday. Birmingham came into the match off the back of a huge upset over league leaders Arsenal, but United made sure they didn’t have the same fate and came out firing.Marc Skinner’s side were 3-0 up after 20 minutes thanks to goals from captain Katie Zelem and Leah Galton, before the afternoon went from bad to worse for the visitors as Emily Ramsey hit in an own goal and Alessia Russo added a fifth with a strike...
SOCCER・1 DAY AGO
Yardbarker

When Paris Saint-Germain signed former Real Madrid captain Sergio Ramos, they wanted him to bring that veteran leadership that was missed when Thiago Silva departed in 2020. However, midway into his first year with PSG, the 35-year-old hasn’t played much. During manager Mauricio Pochettino’s press conference with the media, the Argentine tactician provided an update on the latest on Ramos.
UEFA・2 DAYS AGO
The Independent

Ralf Rangnick has no plans to replace Harry Maguire as Manchester United captain, despite Cristiano Ronaldo’s claim that the squad's mentality must improve to avoid a "nightmare" season.In an interview with television broadcasters this week, Ronaldo said that there needed to be a shift in attitude within the Old Trafford dressing room in order for results to improve.The five-time Ballon d'Or winner rejoined United from Juventus in August, having won eight major honours during his first spell at the club between 2003 and 2009, including three Premier League titles and the Champions League.Ronaldo has returned as the oldest outfield player...
PREMIER LEAGUE・2 DAYS AGO
The Independent

It was basic arithmetic, really. In the same way that two plus two equals four, an almost impregnable defence plus a prolific, 20-goals-a-season striker equals a title-winning team.Two Premier League clubs found themselves stuck on the first side of that equation last summer. Each had one of the best defences in Europe but lacked a player regularly converting at the other end. Both intended to do something about it during the transfer window. One could and did, the other tried and couldn’t. So in that case, why is the team who didn’t spend £97.5m on a centre-forward sitting at the...
PREMIER LEAGUE・1 DAY AGO