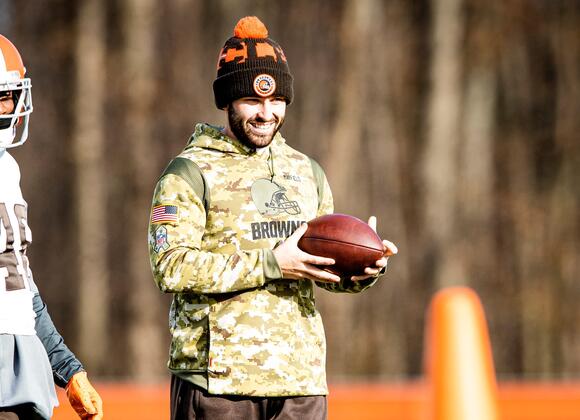 BEREA, Ohio (92.3 The Fan) – Baker Mayfield didn’t dress for practice Wednesday and spent the portion open to reporters as an observer.

Mayfield, wearing the team’s camouflage pullover and a brown pair of sweatpants, remained engaged by walking with the quarterbacks up and down the field while they took snaps.

“I am feeling better and better as the weeks go on,” Mayfield said prior to practice. “No setbacks so we will see.”

Head coach Kevin Stefanski didn’t sound concerned about the possibility of Mayfield taking another day of when the topic came up 30 minutes before practice began.

“In the course of an NFL season, that training room unfortunately there are a lot of guys in there trying to get right and trying to make it to Sunday,” Stefanski said. “That is just part of this grind.”

Despite missing practice Wednesday, like he did a week ago, Mayfield is expected to start Sunday night in Baltimore.

“It is a couple of hours extra of rehab and whatnot throughout the week, but that is what is necessary this time of the year,” Mayfield said of the extra preparation that has been required of him recently.

The day off was helpful last week and the expectation is that it’ll do the same this week.

“I still got the mental reps, like we just finished up walkthrough and doing all of that,” Mayfield said. “That is this part of the season where a lot of guys are banged up, and a lot of guys, it is so important to be mentally locked in during the week when you might not get some of these reps. Also, just the mentality of some guy goes down, you have to have somebody be ready to step up. We enforce that mentally [during the] preparation part of the week.”

In addition to the torn labrum in his left shoulder, Mayfield has also been playing with bone bruises in his left heel and right knee which are impacting his mechanics.

“Your lower body is so important in your throwing motion regardless so it has been definitely a different issue to overcome,” Mayfield said. “But the shoulder stuff is kind of the new normal, and I am not really worried about that anymore. I still try and protect as much as I can. Like I told you guys, there are plays to be made with my feet, and that is where I have been kind of frustrated with that.” 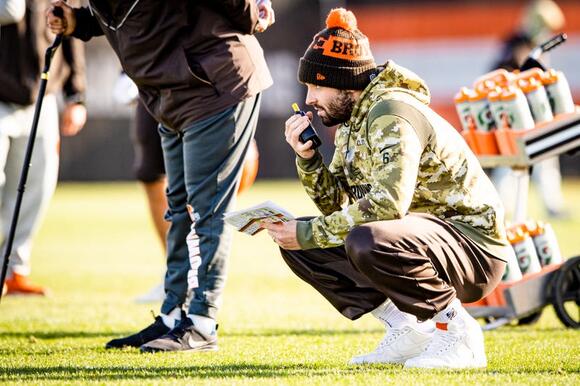 3 receivers down – Jarvis Landry, Anthony Schwartz and Donovan Peoples-Jones did not practice Wednesday.

“I think that was similar to last week in terms of those guys’ availability on Wednesday,” Stefanski said. “I feel good about Jarvis and then I am just not sure on Schwartzy and DPJ.”

Landry continues to rest his injured knee during the week while Peoples-Jones is dealing with a groin injury and Schwartz remains in concussion protocol.

Peoples-Jones leads the Browns with three receiving touchdowns and has proven himself to be a dependable target for Mayfield.

“He is a very consistent guy,” Mayfield said. “He is somebody who he is going to be in the same spot every time. You talk through it with him throughout the week, and you can trust that he is going to do it come game time, as well.”

“I think it’s a bigger emphasis on swarming to the ball,” linebacker Anthony Walker said. “All 11 guys got to be in the frame when the film stops and that’s what we’re going to work on at practice.”

In addition to completing over 64% of his passes for 2,447 yards with 14 touchdowns and 8 interceptions, Jackson has rushed for 639 yards and a pair of touchdowns while averaging 6.0 yards per carry this season.

Jackson’s ability to beat defenses with his arm as well as feet is a problem rarely solved considering his 36-10 record as a regular season starter for the Ravens.

“He is a great player,” Stefanski said. “We respect him. Certainly, he has our attention. It is just a matter of being sound in all of what you do for 60 minutes or more. You can’t let up versus a great player.”

Early returns – Browns defensive end Myles Garrett ranks fourth in overall Pro Bowl fan voting according to tabulations gathered as of Tuesday at noon and released by the NFL Wednesday.

Garrett has received 76,064 votes, most among defensive players.

Left guard Joel Bitonio is the leading vote getter at his position with 38,810 votes.

Hall of Fame strikeout – No former Browns advanced to the semifinal round of the Hall of Fame process when the 26 semifinalists for the class of 2022 were announced Wednesday.

Up next – Practice Thursday.

Cordarrelle Patterson is a free agent, and Mike Davis might not be back. Here's a look at five running backs the Atlanta Falcons could target in free agency.
NFL・1 DAY AGO
Insider

Odell Beckham Jr.'s ugly divorce from the Browns led to a $500,000 bonus thanks to Rams' playoff win

After a few miserable seasons stuck in Cleveland, Odell Beckham Jr. is thriving in Los Angeles and cashing in on a nice bonus in the process.
NFL・1 HOUR AGO
92.3 The Fan

John Fanta: Baker is likely the starter next year

What options could the Browns have at quarterback next season? John Fanta of Fox Sports believes the most likely road leads right back to Baker Mayfield.
NFL・1 DAY AGO

Ian Eagle: My gut feeling is, Baker will be back for the Browns next year

Ian Eagle, Brooklyn Nets and NFL on CBS broadcaster, talks with Matt Dery on the NFL postseason, as well as the Cleveland Cavaliers and the Cleveland Browns, and if Baker Mayfield will return to Cleveland for the 2022 season.
NFL・20 HOURS AGO
92.3 The Fan

Scott Petrak: We're past the point of worrying about Baker Mayfield's feelings if the Browns bring in another quarterback

How will Baker Mayfield react if the Browns bring in another quarterback to compete for the starting position? Scott Petrak says it doesn’t matter, he needs to earn his spot either way. Hear why with Baskin and Phelps!
NFL・3 HOURS AGO
The Spun

FOX NFL broadcaster and former Cowboy great Troy Aikman didn’t seem to be too happy that he and Joe Buck were in Tampa Bay rather than Dallas. As Buck teased the next Sunday NFC playoff matchup between the Cowboys and 49ers on CBS, Aikman voiced his displeasure with some coded language.
NFL・1 DAY AGO
The Spun

The Kansas City Chiefs officially booked their ticket to a rematch with Josh Allen and the Buffalo Bills in the Divisional Round after blowing out the Pittsburgh Steelers on Sunday. As we all know, Patrick Mahomes and Co. beat the Bills 38-24 last season in the AFC title game and...
NFL・1 DAY AGO
The Spun

Arch Manning, the nephew of Peyton and Eli Manning, is the top college football recruit in the country. The five-star quarterback has scholarship offers from nearly every major program. The class of 2023 product has been taking his time with his recruitment, though he could be getting closer to a...
COLLEGE SPORTS・2 DAYS AGO
Sportsnaut

Super Bowl 2022: The Tampa Bay Buccaneers are the reigning NFL champions, but who'll make the playoffs — and lift the Lombardi Trophy at the end of this season?
NFL・1 DAY AGO
FanSided

It felt like January 1991 again for Sal Maiorana as Josh Allen and the Buffalo Bills put forth perhaps the best performance in team history.
NFL・2 DAYS AGO
WGR550

When it comes to the New England Patriots, we’ve been through so much. Nearly twenty years of domination. Three wins from ‘01 to ‘19. You know a team is in your head when you can remember those three wins without even having to look them up.
NFL・2 DAYS AGO
The Spun

Tony Romo didn’t like how Cowboys quarterback Dak Prescott handled the end of the game on Sunday. After Prescott slid at the 25-yard line, he hurried up to the line with the center but didn’t find the ref so he could properly spot the ball. Romo confirmed during...
NFL・1 DAY AGO
Larry Brown Sports

The Pittsburgh Steelers will have to address the quarterback position this offseason for the first time in 18 years. They won’t have that high of a draft pick after reaching the playoffs, so some have wondered if they could explore blockbuster trade scenarios. That does not appear to be the plan.
NFL・2 DAYS AGO
Fox News

The Pittsburgh Steelers are a mighty underdog against the Kansas City Chiefs on Sunday night in their AFC wild-card playoff game. Steelers head coach Mike Tomlin took it up a notch when he was asked by NBC’s Michelle Tafoya about what adjustments were needed for Pittsburgh to avoid being blown out and possibly upsetting Kansas City in the game.
NFL・1 DAY AGO
ClutchPoints

Just like the rest of the Dallas Cowboys fan base, former team quarterback Tony Romo didn’t like how the Wild Card game against the San Francisco 49ers ended. It’s not that Romo is blaming anyone. The Cowboys could have done better in setting up the final play, and the referees might have some shortcomings as well. However, for the four-time Pro Bowler, it was just a frustrating ending for the home team and their fans who were hoping for that miracle to give them the victory.
NFL・1 DAY AGO