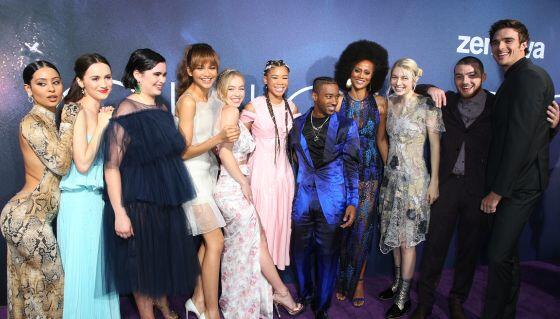 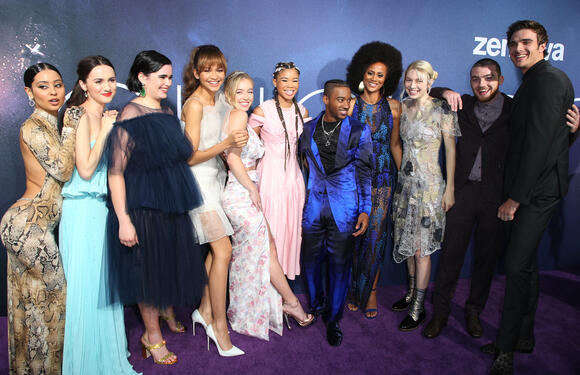 The official teaser video for Season 2 of HBO’s acclaimed drama series Euphoria debuted yesterday (Nov. 23). The show returns next year and it is full of exciting twists and turns.

The teaser begins with Emmy award-winning actress Zendaya , who portrays Rue in the series. She is dancing and singing around  her room with no worries at all as she narrates the idea that problems are merely insignificant as children. Rue goes on to say that this changes as people grow older.

“When you’re younger everything seems so permanent,” Rue narrates in the short teaser video. “But as you get older you begin to realize nothing is and everything you love begins to drift away.”

The video continues with a montage of different scenes throughout the next season from the returning cast members wild parties, birthday celebrations and more of Rue’s antics. Actress Storm Reid , who portrays Rue’s little sister Gia in the series, ends the short one minute teaser asking Rue, “are you high?” Rue responds after spitting her milk back into the glass, “I mean…”

Euphoria is an American adaptation and HBO original series of the Israeli show of the same name, which follows the troubled life of 17 year old Rue, a drug addict fresh from rehab with no plans to stay clean. Circling in Rue’s orbit are Jules, a transgender girl searching for where she belongs; Nate, a jock whose anger issues mask sexual insecurities; Chris, a football star who finds the adjustment from high school to college harder than expected; Cassie, whose sexual history continues to dog her; and Kat, a body-conscious teen exploring her sexuality. As the classmates struggle to make sense of their futures, the series tackles the teenage landscape of substance-enhanced parties and anxiety-ridden day-to-day life with empathy and candor.

The hit series slowed down production due to coronavirus and the impending pandemic. HBO ordered two special episodes to air before the second season to hold fans over. The first one, titled “Trouble Don’t Last Always,” premiered on December 6, 2020 and follows Rue as she deals with the aftermath of leaving Jules at the train station and relapsing. The second episode, “Fuck Anyone Who’s Not a Sea Blob,” debuted January 24, 2021. This special episode chronicled Jules after leaving Rue behind at the train station. She attends her first therapy session where she discovers how her complicated feelings about Rue closely resemble those she has about her own mother.

Season 2 looks like it will pick up right where it left off with a whirlwind of new issues for Rue and her family and friends to dive into. Catch a glimpse inside of the long-awaited second season of Euphoria in the short teaser trailer below. The series returns January 9, 2022 to HBO.

Unlock ‘Euphoria’ Cast Discoveries Inside: A Few Unknown Facts About the Actors

The second season of Euphoria is heating up already. Since the second season debuted two weeks ago, fans have discovered much more about the cast outside of the show and its layered characters. Take a look at some of our latest discoveries inside.
TV SERIES・6 DAYS AGO
KXAN

Peacock has released the first trailer for “Joe vs Carole,” an upcoming scripted drama series based on the events that inspired the Wondery podcast “Joe Exotic: Tiger King,” and Netflix’s “Tiger King” docuseries.
TV SERIES・2 DAYS AGO
IndieWire

Sure, Sharon Stone starred as a murderer in “Basic Instinct” — but does that mean she can spot one in real life? Welcome to “Murderville,” the town that has a different murder — and a different celebrity detective — every day. Senior Detective Terry Seattle (Will Arnett) runs the Homicide Division, but each guest star is left to catch up on the case without a clue… or a script. The six-episode meta-comedy lands on Netflix February 3. A spoof on classic procedural dramas à la “Law & Order” (for which we already know Arnett has memorized the theme song), “Murderville” has a...
TV SERIES・21 HOURS AGO
Hypebae

The first episode of Euphoria Season 2 finally hit HBO Max last weekend, breaking the streaming platform’s viewer record since its launch in May 2021. The series, starring Zendaya, Hunter Schafer, Alexa Demie and more, premiered with 2.4 million viewers, marking nine times higher than Season 1 Episode 1 that was released in June 2019. According to some tweets, the HBO Max app even crashed when the new episode had just dropped on the platform. With the sophomore season arriving in over two years, fans also revisited the first installment, with eight episodes of Season 1 taking the top 10 spots on HBO Max.
TV SERIES・14 DAYS AGO

It is no secret that Drake is listed as an executive producer of the hit HBO series, Euphoria. However, it’s always been unclear how involved he is in creating the final product. During a recent interview with Kelly Clarkson, Euphoria star Storm Reid broke down just how involved he is in the show’s production.
CELEBRITIES・11 DAYS AGO
startattle.com

As the semester kicks off, Jules questions Rue and Elliot’s new friendship. While Cal hunts for answers, Nate makes a tough decision. Startattle.com – Euphoria | HBO. The lines between fantasy and reality begin to blur as Kat ponders her relationship, and Maddy contemplates the decision to end hers.
TV SERIES・11 DAYS AGO
COMICBOOKMOVIE.com

Has EUPHORIA Actress Storm Reid Been Cast As Riley In HBO's THE LAST OF US Series?

Production of HBO's live-action television series based on Naughty Dog's The Last of Us video game is well underway. Pedro Pascal (The Mandalorian) and Bella Ramsey (Game of Thrones) will star as Joel and Ellie, and the cast also includes Gabriel Luna as Tommy, Anna Torv as Tess and, just last month, the series added Nick Offerman as Bill.
TV SERIES・11 DAYS AGO
Middletown Press

The “Euphoria” Season 2 premiere drew 2.4 million viewers across HBO and HBO Max, a series high for the Zendaya-led drama, according to WarnerMedia. The “Euphoria” premiere marked “the strongest digital premiere night performance for any episode of an HBO series since HBO Max launch and a series-record more than double the Season 1 premiere.”
TV SERIES・14 DAYS AGO

Director James Gunn brings the DC Comics character Peacemaker to life, inspiring a new series coming to HBO Max this week. “Peacemaker” premieres on the streaming service Thursday, Jan. 13. Audiences were originally introduced to Peacemaker in Gunn’s 2021 film “The Suicide Squad” and the story of this character is continued through the HBO Max series.
TV SERIES・12 DAYS AGO
Click2Houston.com

HOUSTON – HBO’s hit show ‘Euphoria’ takes place in the town of East Highland, where 17-year-old Rue must find hope while balancing the pressures of love, loss, and addiction. Actress Nika King stars as ‘Leslie Bennett’ a widow, and the mother to daughters Rue (played by...
TV SERIES・10 DAYS AGO
uticaphoenix.net

Florence Pugh praises HBO’s ‘Euphoria’ and its cast on her Instagram story:. “Watched first ep last night… Holy crap this series is made of pure talent. Every frame! Every costume!”. The season 2 premiere of ‘Euphoria’ drew 2.4 MILLION viewers across HBO and HBO Max, a...
TV SERIES・13 DAYS AGO
punchdrunkcritics.com

Ridley Scott and high-concept sci-fi go hand-in-glove, and it seems that many of the religious themes he attempted to explore in his recent Alien sequels have found new life on Raised by Wolves. The HBO Max series is set to launch its second season soon, and a new trailer highlights where the story of two paranoid, atheist androids and their human children will go.
TV SERIES・11 DAYS AGO

Euphoria has shared a new look at the forthcoming second season – scroll down to watch the video. The hit HBO show released an extended trailer previewing the content of the new season immediately after the first episode of the second chapter premiered. The video sees the aftermath of...
TV SERIES・13 DAYS AGO
Hot 107.9

Netflix’s upcoming limited series Archive 81 is based upon a podcast, which launched in 2018 and ran for three seasons. The streaming platform released the trailer for its latest supernatural thriller starring Mamoudou Athie.
TV SERIES・19 DAYS AGO
Decider.com

Is HBO’s ‘Euphoria’ Based on a True Story?

Euphoria has returned, and with it, a series of wild storylines that twist and turn out of control. Call it unrealistic, or take the devil’s advocate position and claim your high school experience was just like the East Highland High schoolers’ — we don’t care! Either way, while you’re watching, you may start to wonder if any of the stories are real. Was Mouse an infamous drug kingpin? Is Rue (Zendaya) a real person? Did parties like this actually happen somewhere in the world? Maybe. (But probably not, right?)
TV SERIES・14 DAYS AGO
Elite Daily

Except for a pair of standalone specials, Euphoria has been off the air for nearly two and a half years since Season 1, due to the 2020 Hollywood shutdown. But it feels like barely any time has passed when Season 2 comes screeching up to the curb with a return episode that’s a party away from ending it all. One of the hour’s most significant dramatic moment involved a brand new arrival: Elliot, who saved Rue’s life. So, who plays Elliot on Euphoria Season 2? Like Zendaya, Dominic Fike is a multi-hyphenate artist.
TV SERIES・14 DAYS AGO
Decider.com

HBO‘s controversial teen drama Euphoria has become known for its provocative nature and glitter-soaked, hard-partying teens since it premiered in 2019. But when it comes to the show’s trademark aesthetic, its hazy Southern California setting is honestly underrated. Now that it’s finally back, it’s worth taking a look at where the wild events of Euphoria were actually filmed.
LOS ANGELES, CA・14 DAYS AGO
oberlinreview.org

This past Sunday, HBO’s critically acclaimed series Euphoria returned for its second season to mixed reviews. The first episode picks up right where the season finale left off, in spite of its two intermediate COVID-19-era bottle episodes, which highlighted Rue and Jules’ respective trepidations regarding their relationship while strategically opting not to advance the show’s plot. Fans and first-time viewers alike are invited into the harsh life of Rue, played by Zendaya, who is once again struggling with drug addiction after a promising recovery in the first half of the last season. Zendaya’s performance in the 2020 special episode of the series earned her an Emmy for best actress in a drama series, making her the youngest recipient to ever win the award. Euphoria has become a cultural touchstone for Gen Z, both for its wildly entertaining, albeit unsettling and traumatic, plot and its trendsetting fashion. With the show’s return this season, writer, director, and creator Sam Levinson sets viewers up for a season filled with betrayal in old relationships and the precarious, deceit-filled beginnings of new ones.
TV SERIES・11 DAYS AGO
Hot 107.9

The star of HBO Max's Euphoria Season 2 debut is Angus Cloud. The premiere explored his character, Fezco's backstory and started with a New Year's bang. Check out a gallery of our new favorite star, Angus Cloud, from the series inside.
TV SERIES・14 DAYS AGO
SPY

As one of the most anticipated second seasons in television history, Euphoria season two is finally here, and we couldn’t be more excited about it. And, spoiler alert: after watching the first episode, you’re going to wish you were able to watch the entire season. If you’re unfamiliar with the cultural phenomenon that is Euphoria, then boy, you are missing out. This gritty, cinematic series follows a variety of high schoolers through an explosion of shock value-esque situations involving teen romance, party culture, drug abuse, sexual abuse and more. The characters are dramatized through iconic costumes, and makeup looks now synonymous...
TV SERIES・14 DAYS AGO