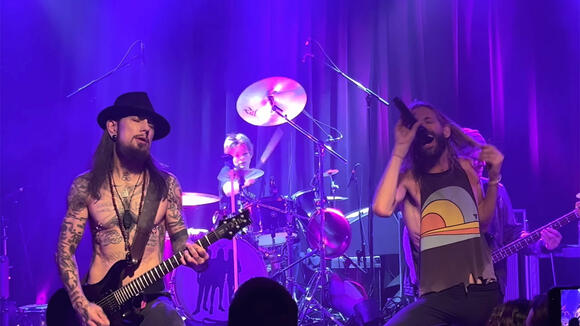 Taylor Hawkins , Dave Navarro , and Jane’s Addiction bassist Chis Chaney quietly unveiled their supergroup NHC with a short set at the Ohana Festival in September, but they made their official debut with a full-length show at L.A.’s Troubadour on Tuesday evening.

The set began with nine songs from their in-progress album, including several they’ve already shared with fans like “Lazy Eyes,” and “Feed the Cruel.” The second half of the show moved to tunes from Hawkins’ solo career like “Louise” and “Range Roger Bitch.” It wrapped up with Queen’s “Keep Yourself Alive” and the David Bowie classics “Rock ‘n’ Roll Suicide” and “Ziggy Stardust.”

Hawkins, Navarro, and Chaney were joined by Foo Fighters guitarist Pat Smear and Foos backup singers Barbara Gruska, who doubled as the group’s drummer when Hawkins moved away from the kit to sing lead. And for the finale of “Ziggy Stardust,” Taylor’s 14-year-old son Shane played drums. “He’s a little fucking bad-ass,” Hawkins told the crowd as he was walking onto the stage. “That is for goddamn sure.” His presence caused Taylor to change the lyrics to, “He took it all too far/But boy can Shane play the fuckin’ drums.”

NHC came together in early 2020 when the pandemic caused Jane’s Addiction and Foo Fighters off the road for an indefinite period of time. It began with Hawkins, Navarro, and Chaney jamming in the studio, but quickly grew into something more. “We just kept going, and before we knew it, we had a body of work,” Navarro recently told Rolling Stone . “And then a light bulb went off and we realized we had an actual band and were going to make a record.”

They’re still putting the finishing touches on that record, which is slated for sometime in 2022, but they’re already plotting out a headlining tour. “I kind of imagine our live show being somewhere between Rush and the Faces,” Hawkins told Rolling Stone . “I want there to be a looseness, a party vibe. My attitude is, ‘If you’re here, get up on the stage and play with us.’ Let’s just say America is there. We have no problem getting them up there and plying ‘Ventura Highway.’ America, if you’re around, join the gang.”

‘I Hope Paradise Is as You Remember It From the Dashboard Light’: Celebrities, Collaborators Pay Tribute to Meat Loaf

News of Meat Loaf’s death on Thursday at the age of 74 led to an outpouring of grief on social media, with tributes flooding in from Brian May, Cher, and more. “Remembering great times,” May wrote. “Completely gutted that Meat Loaf has left us. Always full of madness, with the innocent sense of naughtiness of a 5-year-old, Meat was forever young. I called him Mr. Loaf, and he called me when he wanted some wacky guitar playing. We had so much fun so many times, and, just three months younger than me, he felt like a brother. Dear Meat, the world...
MUSIC・3 DAYS AGO
Rolling Stone

Brothers Osborne flex their muscles on the wicked new song “Headstone,” one of three bonus tracks that appear on a deluxe edition of their 2020 album Skeletons. “Write that on my headstone,” singer TJ Osborne commands in the chorus, while his brother John lays down a meaty riff. It’s a ferocious rocker, one of the duo’s most aggressive. At the midpoint, John’s guitar solo cuts loose, teeing up an unexpected time change. “Here lies a man who gave a damn / wasn’t scared to stand for something,” TJ sings after the break. “Headstone” arrives with another previously unheard song, “Midnight Rider’s Prayer.”...
MUSIC・3 DAYS AGO
Rolling Stone

Marianne Faithfull will give her 1999 album, Vagabond Ways, the deluxe treatment with a reissue due out March 4. She’s teasing the release with the demo recording for the album’s “Incarceration of a Flower Child,” a song Roger Waters wrote in 1968 but never recorded with Pink Floyd. On the demo, Faithfull sings along to a backdrop of acoustic guitars and one buzzy electric as she describes a scene of drinking cheap wine and smoking dope on Indian tapestry cushions. “Don’t get up to answer the door, just stay with me here on the floor,” she belts. “It’s going to get...
MUSIC・4 DAYS AGO
iHeartRadio

It was the same year Rage Against The Machine formed.
MUSIC・1 DAY AGO
societyofrock.com

Rosie Thomas: All Is Full Of Love (Björk Cover)

Featuring guest vocal contributions from Sufjan Stevens, The Shins, Iron & Wine, Alexi Murdoch, The Head and The Heart’s Charity Theilen, The Lone Bellow’s Kanene Pipkin, William Fitzsimmons, Dawn Landes, Jeff Shoop and many more, singer-songwriter and comedian Rosie Thomas’ cover of the iconic Björk track “All Is Full Of Love” rises from a quiet rendition to an interwoven, empowered mélange. It’s the second single in Thomas’ Lullabies For Parents series, which has been designed to support, encourage and entertain parents (and includes more than music). The cover is an exquisite addition to a thoughtful mission.
MUSIC・13 DAYS AGO

Welcome to Day 4 of Hanukkah, with Dave Grohl and Greg Kurstin keeping up with the festivities with their latest cover in the "Hanukkah Sessions" series, this time celebrating one of the "loudest and proudest of hard rocking Jews," Van Halen's David Lee Roth. The two musicians continue to make...
MUSIC・5 DAYS AGO
1029thebuzz.com

The Above Ground benefit which took place last month in Hollywood, CA was a huge success. The event's co-founders Dave Navarro (Jane’s Addiction) and Billy Morrison (Billy Idol) were able to make a $50,000 donation to MusiCares in ongoing effort to promote awareness and raise funds for the treatment of mental health.
CHARITIES・12 DAYS AGO
Rolling Stone

Surviving Garfunkel: How Paul Simon Found His Voice and Made His First Solo Masterpiece

Happy 50th birthday to Paul Simon’s self-titled solo album — the funniest, nastiest, leanest, meanest, and possibly weirdest masterpiece of his great career. When the singer-songwriter dropped Paul Simon on Jan. 24, 1972, it was a shock to a pop audience that was expecting more sweetness in the Simon and Garfunkel mode. But this album was his big Garfunkel Purge, embracing his bitchy wit. It was considered a commercial flop, too eccentric for the millions who liked him better with Artie around. It usually gets overlooked in his story. But for some fans, including this one, it’s the best album...
MUSIC・21 HOURS AGO
Eagle 102.3

While Jane's Addiction's Nothing's Shocking album art certainly raised a few eyebrows in 1988 with the two nude female models sitting with their heads ablaze with flames, that iconic image has stood the test of time. However, guitarist Dave Navarro revealed that another piece of artwork from the album actually did receive an alteration due to a complaint.
ROCK MUSIC・7 DAYS AGO

John Mellencamp is Compellingly Cranky on ‘Strictly a One-Eyed Jack’

“We watch our lives just fade away,” John Mellencamp sings on Strictly a One-Eyed Jack, his 25th studio album. The grim honesty of the sentiment is striking, almost as striking as the forbiddingly rugged croak of his voice, which now approaches Bob Dylan and Tom Waits territory in its rangy, weathered gravitas. At 70, Mellencamp has seen enough: “Worries occupy my brain/I worry about tomorrow/I worry about today,” he sings over the front-porch blues stomp of “I Am a Man That Worries.” The music is just as serious, a rough yet refined version of the Americana rusticity that’s been a...
MUSIC・3 DAYS AGO
Rolling Stone

Earl Sweatshirt brought his unique lyrical stylings to The Tonight Show Monday with a performance of his song, “2010.” The cerebral track, which finds the 27-year-old reflecting on the beginnings of his career, was the first single from Earl’s latest album, Sick!, which was released earlier this month. “Foot shook ground when I stepped on it/ I didn’t look back when I broke soil/ ‘Cause every time I did it would hurt more,” he raps. “We’re not going to escape certain laws of science, so your ascension has to be controlled,” Earl told Rolling Stone in December when asked about his rise to fame at age...
SCIENCE・5 HOURS AGO
Variety

‘Meet Me in the Bathroom’ Review: Time Capsule Doc Explores the Early Years of the Strokes, the Yeah Yeah Yeahs and LCD Soundsystem

There’s a montage early on in Dylan Southern and Will Lovelace’s documentary “Meet Me in the Bathroom” that is bound to give any geriatric millennial pause. The year is 1999. It’s New Year’s Eve in New York City. President Bill Clinton is speaking on television, full of optimism for the new century, while doomsday preppers stock up on ammo in anticipation of the Y2K bug plunging the world into a technological dark age. With the Twin Towers looming peacefully in the background and nary a cell phone in sight, five Manhattanites barely out of their teens are poised to emerge...
NEW YORK CITY, NY・1 DAY AGO
Rolling Stone

‘You Can Judge for Yourself’: Damon Albarn Addresses Taylor Swift Feud at LA Concert

Damon Albarn learned the hard way Monday that no one likes a mad woman when he claimed Taylor Swift “doesn’t write her own songs” — but that didn’t stop the Blur frontman from doubling down on his comments during a Los Angeles concert later that evening. According to Spin, Albarn referenced the day’s events before the finale of his performance at the Walt Disney Concert Hall and even took aim at Los Angeles Times music critic Mikael Wood, whose interview with Albarn contained the Swift quip. The British rocker claimed Wood “cast me into the social media abyss” and told fans “you can...
LOS ANGELES, CA・51 MINUTES AGO
Variety

A Few Last Words From Meat Loaf: In an Unpublished Interview, the Singer Reveals Secrets of ‘Bat Out of Hell’

In 2016, I went into a conference room in Beverly Hills to spend a couple hours talking with Meat Loaf, who had just finished recording what would be his final studio album, “Braver Than We Are.” The project found him dipping into nearly 50 years’ worth of Jim Steinman songs that he’d never gotten to or that had been newly revised, and he also brought in Ellen Foley and Karla DeVito for cameos to really make the project feel like old home week, as much he was adamantly opposed to trying to recreate the sound of his 1977 breakout, “Bat...
MUSIC・11 HOURS AGO
NME

Stephen Malkmus debuted two new songs at a gig in Portland at the weekend alongside one of Pavement‘s classic tracks. The singer-songwriter, best known as the frontman of indie rock stalwarts Pavement, played his first gig since 2019 on Sunday (January 16) at The Alberta Abbey. Accompanied by his...
MUSIC・5 DAYS AGO
Rolling Stone

Grunge trailblazers Melvins have teamed up with one of the genre’s MVPs, drummer Matt Cameron, for a muscular new cover of Soundgarden’s “Spoonman.” As a member of Soundgarden, Cameron played on the band’s original recording of the song on their Superunknown album; he has since joined Pearl Jam and was also a member of Temple of the Dog. The track appears on the Melvs’ Lord of the Flies EP, out now. In addition to Cameron, the lineup on “Spoonman” — a song written in the unusual time signature of 7/4 — includes Melvins founders singer-guitarist Buzz Osborne and drummer Dale Crover,...
MUSIC・19 HOURS AGO