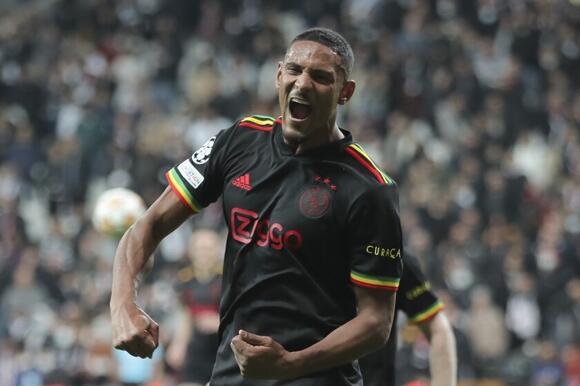 Sebastien Haller brought his Champions League goal tally to nine this season as he came off the bench to score both goals as Ajax beat Besiktas 2-1 on Wednesday to secure the top spot in Group C with five straight wins.

Ivory Coast striker Haller, who came on at halftime, has now scored in his first five Champions League matches, a feat only previously achieved by Alessandro Del Piero, Diego Costa and Erling Haaland. He is the first player to score nine goals in his first five matches in the competition.

“I just tried to keep my focus, stay in the game and, yes, be important for the team,” he told Dutch television.

Haller first tapped in from close range after a cross by Nicolas Tagliafico in the 54th minute and then deflected a shot by Lisandro Martinez into the roof of the net 15 minutes later.

Haller is level with Bayern Munich's Robert Lewandowski as the top scorer in the Champions League this season.

Rachid Ghezzal had given Besiktas the lead from the penalty spot in the 22nd minute after Noussair Mazraoui handled the ball from a corner by Ghezzal.

Ajax squandered good chances before the break, with Mohamed Daramy missing the target twice from good positions and seeing Mert Gunok save a powerful shot.

Ajax goalkeeper Andre Onana, playing his first Champions League game since his return from a nine-month doping suspension, made two good saves to keep Ajax in the match in the first half.

Pep Guardiola has insisted that Manchester City have not been 'luckier' than other Premier League clubs with Covid-19, despite Thomas Tuchel’s belief that it has been a deciding factor in the title race.Ahead of Chelsea's visit to the Etihad for Saturday's lunchtime kick-off, Tuchel said that "the biggest difference" between his side and City is that the defending champions have "dealt better with injuries and the Covid situation"."Maybe it is lucky, maybe they do it better, but they have fewer injuries to key players, fewer days out and weeks where they miss them. They did not suffer from Covid like...
PREMIER LEAGUE・1 DAY AGO
goal.com

WATCH: De Bruyne finish gives Man City deserving lead (US only) "Yesterday before training, he still had problems with his hip flexor," the Red Devils boss has said. "I had another conversation with him and we then decided that it doesn't make sense to take him on the journey here. Hopefully he can play on Wednesday.
PREMIER LEAGUE・1 DAY AGO
The Independent

Ralf Rangnick has no plans to replace Harry Maguire as Manchester United captain, despite Cristiano Ronaldo’s claim that the squad's mentality must improve to avoid a "nightmare" season.In an interview with television broadcasters this week, Ronaldo said that there needed to be a shift in attitude within the Old Trafford dressing room in order for results to improve.The five-time Ballon d'Or winner rejoined United from Juventus in August, having won eight major honours during his first spell at the club between 2003 and 2009, including three Premier League titles and the Champions League.Ronaldo has returned as the oldest outfield player...
PREMIER LEAGUE・2 DAYS AGO
Santa Maria Times

DORTMUND, Germany (AP) — Erling Haaland scored twice to propel Borussia Dortmund to a 5-1 win over Freiburg and close the gap to Bundesliga leader Bayern Munich to three points on Friday. Belgian right back Thomas Meunier got Dortmund underway with two goals from corners in the opening half-hour...
SOCCER・2 DAYS AGO
The Independent

Manchester City increased their lead at the top of the Premier League table to 13 points as Kevin De Bruyne’s strike earned the defending champions a 1-0 win over second-placed Chelsea. City dominated possession in the first half but Jack Grealish was denied an opening goal when Kepa Arrizabalaga blocked his shot with an outstretched leg. Romelu Lukaku went close after the break but saw a curling effort saved by Ederson. The hosts took the lead in the 70th minute when De Bruyne curled in an excellent strike past Kepa from outside of the box, Chelsea continued to struggle to...
PREMIER LEAGUE・1 DAY AGO
SkySports

Norwich boss Dean Smith hopes his side have "turned a corner" after breathing life into their Premier League survival hopes with a 2-1 victory over Everton which heaps more pressure on Rafael Benitez. Michael Keane met Joshua Sargent's low cross to divert the ball into his own net (16), and...
PREMIER LEAGUE・1 DAY AGO

Arsenal have submitted a formal request to the Premier League asking to postpone their north London derby fixture against Tottenham on Sunday. Mikel Arteta’s side are suffering from several absences due to a Covid outbreak, injuries and players being away on international duty at the Africa Cup of Nations. The Premier League confirmed the request had been lodged in a statement released on Friday evening and said they will take a final decision on Saturday.“The Premier League has received a postponement request from Arsenal FC relating to their away match against Tottenham Hotspur, due to be played at 4.30pm...
PREMIER LEAGUE・2 DAYS AGO
San Diego Union-Tribune

MATCHDAY: Milan can move top in Italy with win over Spezia

Robert Lewandowski scored a hat-trick as Bayern Munich moved six points clear at the top of the Bundesliga with a 4-0 win at Cologne.Lewandowski netted the opener after just nine minutes before Corentin Tolisso doubled Bayern’s lead prior to the interval.Poland international Lewandowski then scored his second after the hour mark and completed his treble with 16 minutes remaining.The second-half strikes took Lewandowski to 300 Bundesliga goals as he became the first player to reach the landmark since Gerd Muller in 1976.Bayern also eclipsed their own record by scoring for the 66th consecutive league match. The win restores Bayern’s advantage...
SOCCER・1 DAY AGO
San Diego Union-Tribune

Aston Villa host Manchester United in the Premier League this afternoon. United left victorious when the two sides met just a few days ago in the FA Cup third round after Scott McTominay struck the game’s only goal inside eight minutes. Ralf Rangnick’s side still have plenty of ground to make up in the league, though, with the club six points adrift of the top four heading into the weekend as Cristiano Ronaldo publicly urged his teammates to improve their attitudes. Follow Aston Villa vs Manchester United LIVEVilla have been showing their own intent in the transfer window with the...
PREMIER LEAGUE・1 DAY AGO
San Diego Union-Tribune