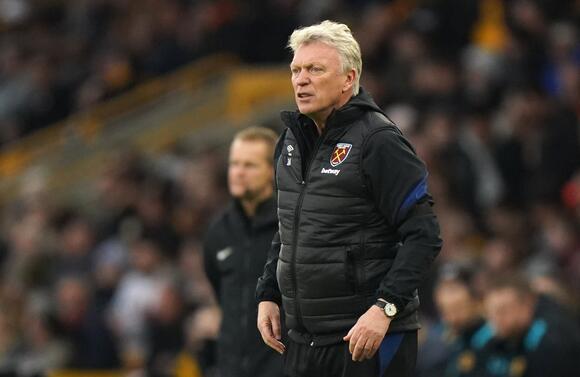 David Moyes admitted it would be a challenge to play behind closed doors again ahead of West Ham ’s Europa League match at Rapid Vienna .

Austria has recently returned to a full national lockdown as restrictions were reintroduced to curb rising Covid -19 infections across much of Europe.

It will be West Ham’s first match in an empty stadium since the opening fixture of pre-season, and the manager admitted it could have an effect.

“I hope we’re able to deal with it. I think when it first happened, everybody felt awkward with the voices, the shouts, the screams around the stadium.

“All those things which we’ve gone away from in the last six months or more I hope we’re not back but at the moment in the short term we are.”

West Ham have already booked their place in the competition’s knockout rounds after an impressive start to their Europa League campaign, but victory would ensure they top the group and avoid a play-off tie with a Champions League third-place group side.

However, with 12 matches scheduled before January 1, Moyes has left Michail Antonio and Lukasz Fabianksi in London and he insisted that the club want to give opportunities to the full squad.

“Everybody will see during the competition we’ve tried to make sure we mix the first team and we mix all the players who are in it as much as we can. We’ve got a good squad,” the Hammers boss said.

“The players have all performed really well throughout the competition, so we do want to use them all. We want to give people opportunities, but we can’t just always get everyone a game.

“We’ve got to try to stay strong in the games, we know the opposition are tough so we have to go in still with as much of a strong side as we can.

“You talk about Manchester City but the following Wednesday we’ve got Brighton and then we’ll be at Chelsea so it’s probably just a programme that makes these games new to us and a bit more difficult.”

West Ham on course to be in Champions League mix, says David Moyes

David Moyes has West Ham on course to meet his points target this season and has challenged them to stay the distance and be in the mix for the Champions League. The Hammers finished two points behind fourth-placed Chelsea last season and Moyes wanted them to make up that gap this term.
PREMIER LEAGUE・2 DAYS AGO
The Guardian

West Ham boss David Moyes has warned the Premier League that he may take a harder line on fixture rearrangements after his side lost to Leeds. The Hammers lost 3-2 to Leeds, who had a full week to prepare for the game compared to the hosts' four days. Twenty-one Premier...
PREMIER LEAGUE・1 DAY AGO
Tribal Football

West Ham boss David Moyes admits they're finding the winter market difficult to work. Moyes was speaking after Sunday's defeat to Leeds. He said: "The club and the board are happy that I can bring people in, but it is up to me to find the right players. "You want...
PREMIER LEAGUE・17 HOURS AGO

Kevin De Bruyne scored a brilliant winner as Premier League leaders Manchester City moved 13 points clear with a 1-0 victory over second-placed Chelsea on Saturday.The Belgian playmaker, who had an unhappy spell at Chelsea early in his career, curled beyond Kepa Arrizabalaga from distance to settle a tight contest at the Etihad Stadium with 20 minutes remaining.It was a moment of magic worthy of winning any game but was the least City deserved having dominated against the side that beat them in last season’s Champions League final.Blue is the colour! 💙#ManCity pic.twitter.com/816nfRAo0M— Manchester City (@ManCity) January 15, 2022The win...
PREMIER LEAGUE・2 DAYS AGO
goal.com

Pep Guardiola has insisted that Manchester City have not been 'luckier' than other Premier League clubs with Covid-19, despite Thomas Tuchel’s belief that it has been a deciding factor in the title race.Ahead of Chelsea's visit to the Etihad for Saturday's lunchtime kick-off, Tuchel said that "the biggest difference" between his side and City is that the defending champions have "dealt better with injuries and the Covid situation"."Maybe it is lucky, maybe they do it better, but they have fewer injuries to key players, fewer days out and weeks where they miss them. They did not suffer from Covid like...
PREMIER LEAGUE・2 DAYS AGO
Miami Herald

Adama Traore scored his first goal of the season and Wolverhampton survived a late rally to beat Southampton 3-1 in the English Premier League on Saturday. Raul Jimenez converted a penalty in the 37th minute and captain Conor Coady headed home in the 59th before a nervy finish at Molineux Stadium.
PREMIER LEAGUE・2 DAYS AGO
The Independent

Manchester City and Chelsea meet this afternoon with the hosts looking to extend their lead at the top of the Premier League table to 13 points. Chelsea will be hoping their cup form can inspire their league performances as they look to break a bad run of form, in which the west London side have only managed one win in their last five games. City boss Pep Guardiola will be back on the touchline after missing his side’s FA cup game away at Swindon Town and will be hoping to get one over on his long-time competitor Thomas Tuchel.Follow...
PREMIER LEAGUE・2 DAYS AGO
The Independent

Aston Villa welcome Manchester United to Villa Park in the Premier League this afternoon. The fixture comes just days after the two teams met in the third round of the FA Cup, with Ralf Rangnick’s side holding on to a 1-0 victory after Scott McTominay stuck early. After a tumultuous first half of the season, United entered the weekend six points adrift of the top four, although Rangnick’s side do also have two games in hand. Follow Aston Villa vs Manchester United LIVEMeanwhile, Aston Villa have made an early statement of intent in the transfer market after completing the signings...
PREMIER LEAGUE・2 DAYS AGO

Marcelo Bielsa saluted the desire of his Leeds players after Jack Harrison’s stunning hat-trick fired them to a 3-2 win at West Ham Winger Harrison outshone the Hammers’ in-form wideman Jarrod Bowen as the Whites registered back-to-back Premier League wins for the first time this season.Leeds travelled to east London without nine first-team players – and lost two more before half-time – as well as a bench containing seven teenagers, including 15-year-old Archie Gray.But unlike a few miles up the road in north London, there were no thoughts of a postponement.“There’s rules to ask for that type of thing and...
PREMIER LEAGUE・1 DAY AGO
The Independent

The end of Rafael Benitez’s misguided and disjointed 200-day reign at Goodison Park has left Everton looking for a seventh permanent manager in six years.However, the problems at the club run deeper than what has been happening on the pitch in the last six months.The PA news agency looks at how the situation has got to this point and what Everton do next.Why did Benitez have to go?7 wins11 defeats1 win in last 13 Premier League matches16th in Premier League tableConceded first goal in 16 of their 22 games in all competitions.The bare fact of one win in 13 league...
PREMIER LEAGUE・14 HOURS AGO
The Independent

Brighton boss Graham Potter insists he is very happy at one of the Premier League’s “best-run clubs” amid reports linking him with the vacant Everton job.The Toffees are searching for a new manager after sacking Rafael Benitez following just one win from 13 top-flight games.Potter, whose contract runs until the summer of 2025, has impressed since arriving at the Amex Stadium in 2019 and has the Seagulls flying high in ninth place ahead of Tuesday’s visit of Chelsea.“I can’t comment on speculation, things that are out there in the newspapers,” he said.“I’m focused on my job here, very happy here...
PREMIER LEAGUE・11 HOURS AGO
The Independent

Follow live reaction as Philippe Coutinho scored the equalising goal on his Aston Villa debut to secure a 2-2 draw with Manchester United in the Premier League. United looked set to claim their second win over Steven Gerrard’s side in a week but Coutinho’s introduction changed the game as he set one up and scored another to complete a wild comeback at Villa Park.Just five days on from knocking Villa out of the FA Cup at Old Trafford, United were handed an early lead as goalkeeper Emi Martinez allowed a Fernandes shot from range through his legs. Villa responded...
PREMIER LEAGUE・2 DAYS AGO
The Guardian

What the papers sayDonny van de Beek has rejected his reported loan deal to Newcastle from Manchester United, according to the Telegraph. The 24-year-old midfielder had been in the sights of the Magpies as they battle against relegation, but the club’s unstable position was also said to be what caused Van de Beek to turn the deal down.Newcastle have struggled with other transfer prospects too but, according to the Daily Express, the club is optimistic a deal for Sevilla defender Diego Carlos can be closed this week. The 28-year-old Brazilian reportedly wants to move to the Premier League and seems...
PREMIER LEAGUE・19 HOURS AGO