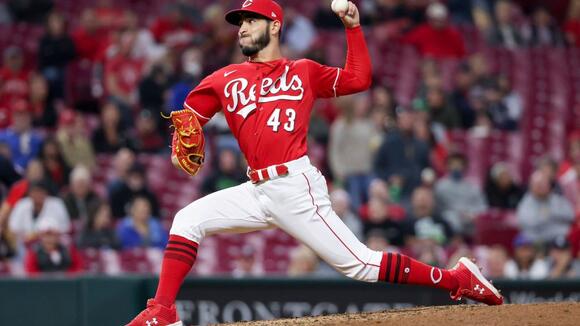 For now, the team’s 40-man roster is full, but the club can remove players and pass them through waivers to free up spots. And such moves should be expected, as there are currently zero catchers on the roster.

He spent his first three seasons with the Houston Astros organization, the previous home of Orioles executive vice president and general manager Mike Elias. The Astros signed Pérez to a $2 million deal in December 2016, two months after the team voided a $5.15 million contract with the pitcher due to concerns with his physical, according to a report on MLB.com .

Last week, the Orioles added six players to the team’s 40-man roster ahead of the deadline to protect minor leaguers in the Rule 5 draft, scheduled for Dec. 8.

The draft date could be pushed back if the players and the league do not agree on a new collective bargaining agreement. The current deal is set to expire on Dec. 1.

After a disappointing 2021 campaign, what are the Phillies' options with Didi Gregorius?
MLB・2 DAYS AGO
The Baltimore Sun

In less than a month, Orioles pitchers and catchers are scheduled to report to Sarasota, Florida, to mark the start of spring training. Yet, there remains uncertainty as to whether that will happen as planned with the league’s owners continuing to lock out the players as the two sides plod toward a new collective bargaining agreement. But as the lockout marches on, so too does Oriole of the ...
MLB・20 HOURS AGO
FanSided

Former Cubs, Yankees, Marlins and Brewers pitcher Sergio Mitre is headed to prison for 40-60 years after he was convicted of femicide in Mexico, stemming from a 2020 incident in which he raped and murdered his ex-girlfriend’s daughter. Mitre was initially arrested in mid-2020 after the 22-month old infant...
CHICAGO, IL・3 DAYS AGO
USA TODAY

USA TODAY Sports broke down the 12 most intriguing cases on the ballot, with all you need to know heading into Tuesday’s momentous announcement.
MLB・2 DAYS AGO

Thanks to the hot stove freeze, there’s time to sit back and explore some of the bigger question marks surrounding the Dodgers for 2022. With Walker Buehler and Julio Urias atop the rotation, Dave Roberts and the Dodgers will have some decisions to make on who will fill out the remaining spots ...
MLB・2 DAYS AGO
Inside The Dodgers

The Dodgers catcher explained how he approaches the highs and lows of a MLB season.
MLB・2 DAYS AGO
Inside The Phillies

A new change will be implemented in the upcoming minor league season.
MLB・2 DAYS AGO

Justin Turner began the 2021 season batting .305 with 29 homers, 50 RBI, and a 1.088 OPS over 84 games. Then he was selected to play in the All-Star Game for the second time, and it appeared as if the Dodgers made a brilliant move in signing him to a 2-year deal with a team option in the previous ...
MLB・2 DAYS AGO
USA TODAY

Three weeks from when pitchers and catchers usually report and no one knows when spring training will start or if it will be a truncated schedule.
MLB・1 DAY AGO
Inside The Phillies

Jean Segura doesn't put up flashy numbers or make dazzling defensive plays, but all together he is one of the most well-rounded players in the National League.
MLB・1 DAY AGO
USA TODAY

The Kansas City Royals drafted pitcher Ben Hernandez fresh out of high school in 2020, but he could display quite a bit of maturity and growth just two years later.
MLB・2 DAYS AGO
USA TODAY

Roger Clemens, the seven-time Cy Young winner, is in his final year of eligibility on the Hall of Fame ballot.
MLB・16 HOURS AGO
Inside The Blue Jays

Ahead of the January 25th Baseball Hall of Fame announcement, we look at five former Blue Jays on the ballot and their chances at induction
MLB・1 DAY AGO
CBS Baltimore

BALTIMORE (WJZ) — Baltimore Ravens defensive end Derek Wolfe tweeted on Monday he had successful hip surgery. While Wolfe was designated to return to practice in October after dealing with what the team labeled as back problems, the lineman never made it onto the field for his 10th season in the NFL. In November, coach John Harbaugh said Wolfe was likely done for the year. On the mend, hip surgery was a success. pic.twitter.com/8xHAPNGYJn — Derek Wolfe (@Derek_Wolfe95) January 24, 2022 “He’s not in a place where he’s going to be able to play,” he said. Prior to the start of the season, the Ravens signed...
NFL・13 HOURS AGO
Inside The Blue Jays

Carter's fiery demeanor got him noticed by Blue Jays scouts. Now it's his humility off the field that's impacting the city of Toronto.
MLB・18 HOURS AGO
Inside The Phillies

Five years after signing on as Phillies general manager, Matt Klentak has accepted a job as special assistant for the Milwaukee Brewers.
MLB・16 HOURS AGO
News 12

If there is a Major League season, the Mets are expected to be serious contenders.
MLB・4 HOURS AGO
Inside The Dodgers

The left-handed hitter has a new coach to help him in the batting cages.
MLB・1 DAY AGO