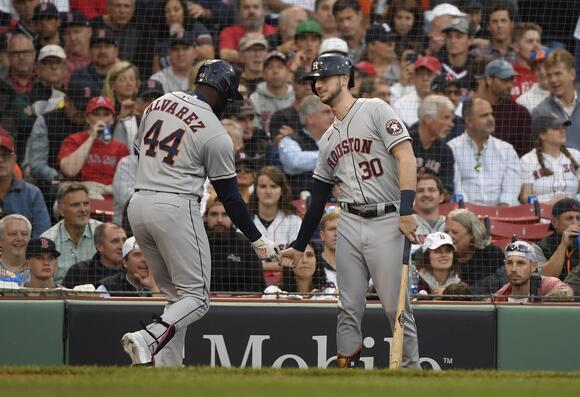 The selections were made by fans voting on MLB.com and a decorated panel of media members, broadcasters, former players and other officials throughout the game who each had an equal say in determining the first-team and second-team choices.

Tucker, 24, recorded the best season of his young career, batting .294 with 30 home runs, 92 RBI, 37 doubles, three triples and 83 runs with a .917 OPS. In the AL, he ranked third in SLG. (.557), third in OPS, tied for fifth in doubles, and ninth in batting average. Tucker was also named the AL Player of the Month for Sept.-Oct. He became the third Astros player in franchise history to record a 30-homer season before turning 25 years old, joining Alex Bregman and Yordan Alvarez.

Three weeks from when pitchers and catchers usually report and no one knows when spring training will start or if it will be a truncated schedule.
MLB・2 DAYS AGO
FanSided

If the lockout persists through spring training, then we will likely miss out of any chance for a warm up and go straight into games. Spring training is definitely one of my favorite times of year as you get to see players and prospects make their case to join the big club and get a chance at the show.
MLB・1 DAY AGO
Audacy

Barry Bonds, Roger Clemens and Sammy Sosa all failed to make the Hall of Fame in the final year of eligibility, which led to a lot of passionate reactions across social media.
MLB・9 HOURS AGO
The Spun

On Tuesday night, the Hall of Fame voting for the 2022 class will be revealed. In honor of this special day, Cal Ripken Jr. named a player the MLB has “shortchanged” in balloting. Ripken made it known that he believes Don Mattingly should be in the Hall of...
MLB・15 HOURS AGO

David Ortiz needed just one swing to power his way into baseball’s Hall of Fame, narrowly punching his ticket to Cooperstown.
MLB・9 HOURS AGO
USA TODAY

Alex Rodriguez, a three-time MVP whose 696 home runs trail only Barry Bonds, Hank Aaron and Babe Ruth, received just 34.3% of the votes in his debut.
MLB・8 HOURS AGO
CBS Boston

BOSTON (CBS) — It wouldn’t be Hall of Fame season if a member of the baseball media wasn’t twisting himself into a pretzel for all the world to see. Enter Jack Curry of the Yankees’ broadcast network. Curry revealed his ballot on Tuesday, which is the day that the Baseball Hall of Fame will announce which players — if any — will earn enshrinement this year. Curry used eight of his allowable 10 votes this year, and for the first time in their 10 years of eligibility, Barry Bonds and Roger Clemens received his vote. The reason Curry hadn’t voted for Bonds and...
MLB・14 HOURS AGO
USA TODAY

After falling short in their final year on writers' ballot, Bonds, Clemens are eligible for consideration by Hall of Fame's Today's Game Committee.
MLB・8 HOURS AGO

Roger Clemens, the seven-time Cy Young winner, is in his final year of eligibility on the Hall of Fame ballot.
MLB・1 DAY AGO
azsnakepit.com

It was the closest battle yet in this series. Jackie Robinson jumped out to an early read, but over the course of the weekend, Rogers Hornsby reeled in the gap, eventually prevailing by 38-32%. Joe Morgan got the bulk of the remaining votes with 24%, as the three-way race I expected, largely came to pass. But in the end, Hornsby's insane offensive numbers proved decisive. I mean, he's the only man in baseball history to bat .400 while hitting 40 home-runs. And yet, by OPS, that was only Rogers's THIRD-best season. His career batting average of .358 trails just Ty Cobb among major-leaguers, and his 1.010 ranks seventh. SABR says there is "really no debate that Hornsby is the greatest right-handed hitter of all time."
MLB・1 DAY AGO
Sportico

Barry Bonds, Roger Clemens, Todd Helton, David Ortiz, Andy Pettitte, Manny Ramirez, Alex Rodriguez, Scott Rolen, Curt Schilling, Sammy Sosa — My ballot for the National Baseball Hall of Fame Class of 2022. The Hall of Fame is now right where it wanted to be in 2014, when it changed the eligibility for players on the writer’s ballot from 15 years to 10. Barry Bonds, Roger Clemens and Sammy Sosa, stars of Major League Baseball’s so-called steroid era, are now off the Baseball Writers of America Association ballot five years before they otherwise would have been. For the 10th consecutive year, the...
MLB・7 HOURS AGO
Inside The Dodgers

Todd Helton continued his climb toward immortality on Tuesday, inching closer to reaching the Hall of Fame.
MLB・7 HOURS AGO
Audacy

MLB Network’s Rob Parker did not vote for David Ortiz citing a gray area with PEDs, but he voted for Barry Bonds, Roger Clemens and Sammy Sosa, leading to one of his colleagues to call him out.
MLB・6 HOURS AGO
92.9 The Game

Will the Atlanta Braves be able to sign Freddie Freeman? Will Major League Baseball play 162 games this year? What is the big hold up in the MLB negotiations?
MLB・7 HOURS AGO
Dodgers Nation

The past couple of seasons has seen plenty of blown calls from MLB umpires that have swayed the outcome of games. Take the one-blown call against the Dodgers and Giants back in July of last season when a swing would have ended the game. Instead, it was called a non-swing which led to a walk and an eventual Giants win. Or we can look to game 5 of the NLDS where a check swing was another blown call that favored the Dodgers.
MLB・2 DAYS AGO
Audacy

Yankees legend Alex Rodriguez randomly showed up on the TV in the fourth quarter of Saturday’s divisional playoff game between the Packers and 49ers.
NFL・2 DAYS AGO
Inside The Blue Jays

Ahead of the January 25th Baseball Hall of Fame announcement, we look at five former Blue Jays on the ballot and their chances at induction
MLB・2 DAYS AGO
92.3 The Fan

Should MLB players from the steroid-era be allowed into the Hall of Fame? Jay Crawford says it does a disservice to the sport to ignore them. Hear why with Baskin and Phelps!
MLB・14 HOURS AGO