'You make us happy every day': George W. and Laura Bush send a sweet video message to daughter Jenna in honor of her 40th birthday - as the Today host breaks down in tears over tribute from co-star Hoda Kotb

Jenna Bush Hager was moved to tears by a heartfelt video message from her parents while celebrating her milestone 40th birthday one day early on the Today show Wednesday.

The former first daughter, who will be ringing in the next decade of her life with her twin sister Barbara Bush on Thanksgiving Day, was fêted with happy birthday messages and a thoughtful gift from her fourth-hour co-host Hoda Kotb.

One of the highlights of the day was the video tribute from Jenna's parents — George W. and Laura Bush — that she watched live on the air with tissues on hand for her inevitable tears.

Scroll down for video

'Hey Jenna, 40 years ago today your dad and I were thrilled to welcome two baby girls into the world,' her mom said. 'You and Barbara have made us happy every day since. Happy birthday to you. We are so, so proud of you. Love you.'

Former President Bush followed up with a jocular message, reminding his daughter that 40 isn't that old.

'Yeah, Jenn, 40 years seemed like an old age, but it turns out it's not,' he joked. 'You're going great. Laura and I love you. We are very proud of you, and we wish you and your sweet sissy, Barbara, a happy birthday.'

Jenna was crying and dabbing her eyes with tissues after watching her parents' video message, saying: It's so sweet. All they said was happy birthday, but it's so sweet.' 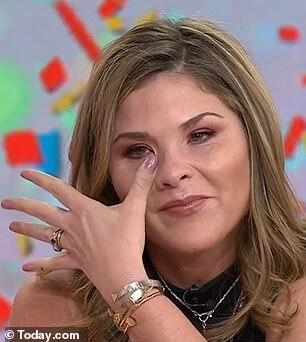 She recalled how her mother gave birth to her and Barbara the day before Thanksgiving in 1981.

'My mom said that being in the hospital having two little girls on Thanksgiving — she ate the turkey [and] she remembers the hospital turkey and stuffing — was her greatest dream,' Jenna explained. 'It felt appropriate for all of her dreams to come true on Thanksgiving.

'I'm sure I made them happy every day except for the day I got arrested,' she jokingly added. 'That day they weren't so happy.'

Jenna was referring to the time she and Barbara were arrested for attempting to purchase alcohol at Chuy's, a Mexican chain restaurant, when they were underage.

Barbara had already been served by the time police arrived and was charged with underage possession, while Jenna was rejected for using an ID that belonged to someone else who was of legal drinking age.

The incident landed the twins, who were 19 at the time, on the cover of the weekly magazines, but the family has no problem joking about it years later.

Jenna, who has three children — Mila, eight, Poppy, six, and Hal, two — went on to open up about her Thanksgiving plans during the segment.

While she won't be seeing her parents this year, she is spending the holiday with her husband Henry Hager's family, her sister Barbara, Barbara's husband Craig Coyne, and the couple's newborn daughter Cora.

'We celebrated [our birthday together] almost every year, so we get to do it again tomorrow,' she said.

The birthday girl also shared an emotional moment with Hoda, who looked back on her time on the show with a video montage, including her first day on the job.

Jenna, who started out as a correspondent, replaced Kathie Lee Gifford as Hoda's fourth-hour co-host in 2019.

'We've had a beautiful time here on this show,' Hoda said.

Hoda then presented her co-star and friend with a four-slot picture frame that featured photos of the big moments in her career: her first day on the show, the day she was announced as the fourth-hour co-host, the first show they hosted together, and the day of their first studio audience.

It was an emotional day for Jenna, who received a number of birthday messages from her celebrity friends, including Reese Witherspoon, Reba McEntire, Trisha Yearwood, and Garth Brooks.

'You are such a sunshine in our lives and I wish you a happy birthday,' Reese added.

Jenna was joined by some of her closest friends later on in the show, and Hoda pulled off another surprise when it was time to bring out her cake.

Country superstar Mickey Guyton sang her 'Happy Birthday' while wheeling out a cart holding a massive three-tier cake and glasses of champagne.

Jenna's jaw dropped when she realized what was happening, and she gripped Hoda's arm while she was serenaded.

'I'm shaking. I need kleenexes!' she said as she started crying again. 'The fact that you are here... I'm dead. I'm really dead.'

Earlier this week, Jenna was interviewing U2 frontman Bono when he surprised her with a celebration in Central Park in honor of her upcoming birthday.

During the segment that aired on Wednesday, the iconic musician suggested that they go for a walk in the park.

'Can we get a pint?' he asked as they approached the restaurant Tavern on the Green. 'Sorry, change of plans.'

Jenna was preparing for the detour when all of a sudden they were surrounded by music as the Susan E. Wagner High School band started to play.

'Wait, what is happening here?' Jenna asked in shock.

After the segment aired, Jenna thanked Bono and his team for the incredible surprise.

'Am I here? Can you pinch me?' she asked Hoda, adding: 'I could not believe it.'

Hoda Kotb’s Shocking Health Update—What Does It Mean For ‘Today’?

The reason for Hoda Kotb’s latest absence from NBC’s Today has finally been revealed, as host Craig Melvin told viewers on Thursday, January 6th that the 57-year-old television personality had contracted a breakthrough case of COVID-19 and would therefore not be on the show until she has recovered. Melvin said: “We should mention here before we get to the news that the reason Hoda is off is like many others she tested positive for Covid. But Hoda tells us she’s doing just fine and we look forward to having her back very, very soon.”
CELEBRITIES・7 DAYS AGO
ETOnline.com

Bring on the tears! Jenna Bush Hager had the best surprise for her Today co-host and best friend, Savannah Guthrie, for her 50th birthday -- a private concert by Andrea Bocelli. On Tuesday’s episode of Today, the world got a look at the gift Bush Hager, 40, gave Guthrie in...
MUSIC・12 DAYS AGO
Hello Magazine

Hoda Kotb has recently returned to work after recovering from COVID-19, and opened up about her experience with the virus on Today with Hoda & Jenna this week. The doting mom revealed to her co-star Jenna Bush Hager that she wasn't the only member of her family to test positive, as her two young daughters have also had Covid.
PUBLIC HEALTH・5 DAYS AGO
Popculture

Just days after Hoda Kotb became the latest NBC talent to contract the coronavirus, the Today show was down another anchor in Studio 1A on Monday. As Kotb returned to the studio on Monday after isolating at home, her co-anchor Savannah Guthrie announced they were "trading places" after she tested positive for COVID-19.
PUBLIC HEALTH・7 DAYS AGO

Al Roker is a much-loved TV star and is great friends with his Today co-stars. And this week, the NBC weatherman made sure to send some extra love in the direction of his colleague Hoda Kotb, who is currently isolating after testing positive from coronavirus. After Hoda shared a new...
CELEBRITIES・8 DAYS AGO
Hello Magazine

Hoda Kotb has given an update on her health just one day after sharing an emotional message from her home, revealing she has tested positive for COVID-19. The Today show host is isolating in New York after the diagnosis and on Friday she updated her Instagram feed with a chilly photo along with a message for her concerned fans.
CELEBRITIES・10 DAYS AGO
Hello Magazine

Hoda Kotb returned to the Today Show on Monday morning for her first day back since having been diagnosed with COVID-19. The TV star shocked and upset fans when she revealed last week that she had caught a breakthrough case of the virus despite having been fully vaccinated. In a...
PUBLIC HEALTH・6 DAYS AGO
Popculture

Hoda Kotb has tested positive for COVID-19. The Today show kicked off Thursday morning with Craig Melvin revealing that Kotb has tested positive for a breakthrough case of COVID-19. Kotb, a long-time staple of the NBC morning show, is vaccinated and has received her booster shot. Amid her positive diagnosis, she will isolate at home, it was confirmed.
PUBLIC HEALTH・11 DAYS AGO

CNN — Today co-host Savannah Guthrie has tested positive for COVID-19 and will be anchoring from home on Monday. Guthrie said she is feeling fine apart from a few sniffles. The news comes days after Hoda Kotb also tested positive. Kotb is back in the studio Monday after taking two negative COVID-19 tests.
PUBLIC HEALTH・7 DAYS AGO
Daily Mail

Vaccinated and boosted Today anchor Savannah Guthrie, 50, reveals she has COVID but says she just has 'a little sniffle' as she films live from home - days after co-host Hoda Kotb, 57, also tested positive

Vaccinated and boosted Today host Savannah Guthrie has revealed she has COVID, just days after her co-anchor Hoda Kotb announced that she had tested positive for the coronavirus. The 50-year-old shared the news of her positive test at the top of Monday's morning show, which she joined via live video...
PUBLIC HEALTH・7 DAYS AGO
shefinds

Savannah Guthrie is the latest in a long line of celebs to announce that they have tested positive for COVID-19, presumably with the latest super-contagious Omicron variant. The 50-year-old news anchor’s positive test result comes just a few da...
CELEBRITIES・2 DAYS AGO
People

Mark Wahlberg is showering his daughter with love as she celebrates her 12th birthday. On Tuesday, the actor, 50, shared a sweet video to Instagram in which he wishes his daughter Grace Margaret a happy birthday and shares his love for his little girl. "Happy birthday you big 12-year-old," Wahlberg...
CELEBRITIES・5 DAYS AGO

Kacey Musgraves is gushing over beau Cole Schafer in honor of his 28th birthday. The 33-year-old country singer shared a lengthy Instagram post on Wednesday describing her writer boyfriend, whom she's been romantically linked to since June, as "stunning," "steadfast," and the "zen in the middle of the chaos." She...
CELEBRITIES・11 DAYS AGO
Cosmopolitan

Kate Middleton took to Instagram yesterday (9 January) to share a sweet message with her 13.3 million followers, thanking them for their well wishes as she celebrated her 40th birthday. "Thank you for all of your very kind birthday wishes, and to Paolo and the National Portrait Gallery for these...
CELEBRITIES・7 DAYS AGO