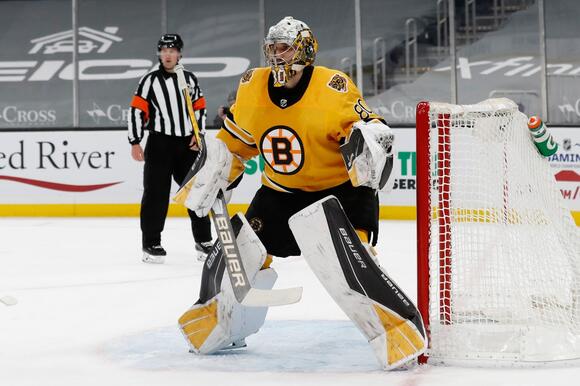 The Bruins’ offseason goaltending plan has been brought back to the forefront this week after former Bruin Dan Vladar shut them out Sunday night in a 4-0 Calgary win .

The Bruins traded Vladar for a third-round pick this offseason, electing to not take the chance on a tandem of two young (but cheap) goalies in him and Jeremy Swayman. Instead they went out and signed Linus Ullmark in free agency for four years and $20 million to pair with Swayman.

Vladar has outperformed Ullmark so far this season, although it’s worth noting that he’s playing behind the Flames’ league-best defense. Still, there’s a case to be made that the Bruins would’ve been better served rolling with the youngsters and spending Ullmark’s money on another part of the roster.

Some have argued that case is nothing more than revisionist history, though, claiming there was no chance the Bruins were ever going to enter the season with two relatively unproven goalies.

According to Mike Milbury, though, there was at least some debate within the Bruins organization about doing exactly that. Making his weekly appearance on The Greg Hill Show, the former Bruins coach and longtime NHL analyst said he heard there were in fact people with the team who wanted to give the Swayman-Vladar tandem a shot.

“Easy to say that now, right?,” Milbury acknowledged. “There were some people in the organization that thought they should’ve gone with Swayman and Vladar. It was the cheaper option. Vladar and Swayman, in particular, had suggested [with their play] that they were going to be able to handle the load.”

That said, Milbury said he also understands why general manager Don Sweeney ultimately chose the path he did, even if it isn’t really working out so far.

“I understand what Sweeney was doing. I mean, if you don’t have a good goalie, if you don’t have a reliable goaltender, no matter what you do at all the other positions, it’s bound to fail,” Milbury said. “So Ullmark had to have been somebody that they targeted, their scouts had seen play, and thought, despite the fact that he didn’t play a whole ton last year, had enough promise to be a number one goaltender.

“Right now, you’re right: It’s looking like it was not the right way to go, and that Vladar and Swayman would’ve been a good option. And then you still have the Rask option in January or February in your holster. Now they’re going to have to move Ullmark or ride with what they have the rest of the year. I think they’ve limited their options with that signing. You have to live with that. Sometimes you win, sometimes you lose, and sometimes you pick a bad goalie.”

Listen to the full interview below:

Karson Kuhlman’s time with the Boston Bruins has come to an end, as the 26-year-old right wing was claimed off waivers by the Seattle Kraken on Monday.
NHL・2 DAYS AGO
Sportsnaut

Now that the 2021-22 season is about half of the way through, and Covid is ravaging many clubs, it’s time
NHL・1 DAY AGO
NHL

BOSTON - The Boston Bruins announced today, January 18, that defenseman Mike Reilly has been placed in the NHL's COVID-19 protocol. Bruins' Win Streak Comes to End with Blowout Loss to Carolina. Boston came out "flat" in 7-1 drubbing at hands of Hurricanes. by Eric Russo @erusso22 / BostonBruins.com. 4:04...
NHL・1 DAY AGO
Yardbarker

When NHL teams face a handful of injuries, or in the case of 2021-22, a handful of players placed into the league’s COVID-19 protocols, that usually means reinforcements come up generally come from their American Hockey League (AHL) affiliate. Such was the case for the Providence Bruins this last week.
NHL・1 DAY AGO

Welcome to our NHL player cards page where you will find data visualizations for each relevant player on the Boston Bruins, stylized as hockey cards. Each card contains a player’s info, role, and salary as well as his stats — both basic and advanced, projected and actual — for an at-a-glance look at his value and ability.
NHL・2 DAYS AGO
nhltradetalk.com

There are a couple of developments coming out of Boston this week as the team is rumored to be kicking tires on a defenseman that is available in trade, but the team is also still looking at employing a player who isn’t keen on sticking with the organization. The Bruins are rumored to be in on John Klingberg talks but are also not getting anywhere when it comes Jake DeBrusk potentially changing his mind about a trade.
NHL・2 DAYS AGO
Boston Globe

The Bruins had two of their regular defensemen available for Tuesday night’s game against the powerful Hurricanes, as another one departed the lineup. Both Matt Grzelcyk, who missed the last two games while in COVID protocol, and Connor Clifton (four games) were cleared. Mike Reilly, however, will be out...
NHL・1 DAY AGO
WEEI Sports Radio

The NHL announced the dates and times for nine rescheduled Boston Bruins games. Their February break – initially scheduled for the Olympics – has now been filled in.
NHL・1 HOUR AGO

The Boston Bruins’ five-game winning streak came to a crashing halt Tuesday night in an ugly 7-1 loss to the Carolina Hurricanes. What do they do after a night like that? “Burn the tape,” according to Patrice Bergeron.
NHL・16 HOURS AGO
Sportsnaut

The Boston Bruins will look for a return to normalcy when they host the Washington Capitals on Thursday night. The
NHL・2 HOURS AGO
KMOX News Radio

When Boston hosts the Carolina Hurricanes on Tuesday night, the Bruins will retire the No. 22 of Hall of Fame
NHL・2 DAYS AGO
Sportsnaut

Joonas Donskoi, who has yet to score a goal this season, netted the clincher in a shootout as the Seattle
NHL・1 DAY AGO
WFAN Sports Radio

Islanders veteran Zdeno Chara dropped Flyers defenseman Zack McEwan with an uppercut to the face, then made sure to check if his opponent was OK.
NHL・5 HOURS AGO
Sportsnaut

Despite a slew of COVID-19 postponements, the interruptions have hardly stopped Auston Matthews’ ability to score goals — especially in
NHL・1 DAY AGO
Sportsnaut

After the first 20 minutes, it seemed as if the Vegas Golden Knights were going to coast to victory in
NHL・1 DAY AGO
WEEI Sports Radio

Carolina Hurricanes forward was asked on Tuesday if he sees similarities between himself and Boston Bruins star Brad Marchand. Marchand responded by saying that’s like “comparing a Lambo to a Prius.”
NHL・1 DAY AGO
Sportsnaut

Toronto Maple Leafs defenseman Jake Muzzin will miss the team’s visit to New York after being diagnosed with a concussion.
NHL・1 DAY AGO