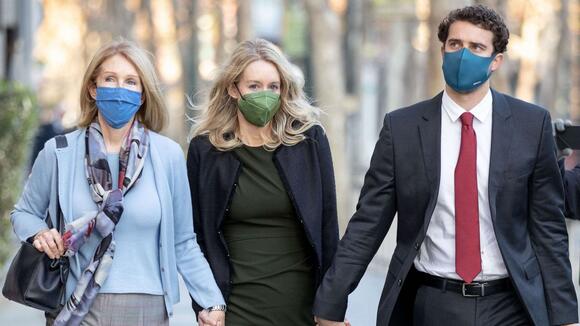 Theranos founder Elizabeth Holmes placed the logos of two major drug companies on blood-testing validation studies, which she then sent to Walgreens executives ahead of their lucrative retail partnership, she told jurors on Tuesday. Theranos also sent the reports to investors who bought millions of dollars of her start-up's stock.

The embattled former CEO also acknowledged that Theranos did not publicly disclose it was running blood tests on third-party machines rather than the devices the company had pitched to potential investors and VIPs during demonstrations, chalking it up to trade secrets.

Holmes made the bombshell admissions before a packed courtroom in California's Silicon Valley during her criminal fraud trial, where prosecutors have previously argued that she failed to tell investors about the third-party machines and doctored documents, which led them to believe the pharmaceutical companies had endorsed Theranos and its blood-testing technology.

Witnesses from both Pfizer and Schering-Plough Corporation testified earlier in the 12-week trial that Holmes did not have permission to use their trademarks on the studies.

But Holmes told jurors on Tuesday that she did not conceal her use of the logos, saying she used them "because this work was done in partnership with those companies and I was trying to convey that."

"I wish I had done it differently," Holmes said.

Holmes, a 37-year-old native of Washington, D.C, is charged with nine counts of wire fraud and two counts of conspiracy to commit wire fraud. She could face decades behind bars if convicted.

She remains on direct examination and will continue her testimony Monday, after the long Thanksgiving holiday weekend.

Members of both the press and public began lining up outside the Robert F. Peckham Federal Courthouse in San Jose early Tuesday at around 2 a.m. PT to claim one of only 34 seats inside the courtroom to see Holmes take the stand for a third day. They stood outside the building for hours before Holmes, wearing a forest green dress and face mask, entered the courtyard just after 8 a.m. PT hand-in-hand with her mother, Noel Holmes, and her partner, Billy Evans.

While testifying Tuesday, Holmes said that in 2013, her company grappled with the high number of blood samples returning to their central lab. So they came up with inventions that allowed them to run the drops of blood originally intended for Theranos machines on modified third-party devices, such as the Siemens ADVIA.

Holmes admitted to jurors that she did not explicitly tell investors, or even Walgreens executives, "in this way" about these third-party devices Theranos was running samples on, per advice from her company's legal counsel.

"If we disclosed that information, we would lose trade secret protection," she said. "The big medical device companies like Siemens could easily reproduce what we had done if they knew what we were doing. They had more engineers than we did and a lot more resources."

Throughout her testimony, Holmes only mentioned the name of her ex-boyfriend and former Theranos COO Ramesh "Sunny" Balwani a handful of times. But when she did, she talked about how he was in charge of financial projections and responsible for handling some investors.

Balwani was charged as Holmes’ co-conspirator, but their cases were severed after Holmes claimed they had an "abusive intimate-partner relationship," according to court documents. Balwani has denied the allegations.

Watch: Jen Shah's Legal Drama Is a Reality Show in Itself. As the trial for her alleged involvement in a telemarketing scheme approaches, Jen Shah is asking for criminal charges against her to be dropped. In court documents filed with the United States District Court for the Southern District of...
ENTERTAINMENT・3 DAYS AGO
Popculture

The U.S. Supreme Court agreed on Nov. 15 to take on a major case involving Taco Bell franchisee Sundance Inc., which owns over 150 franchises of the fast-food chain nationwide. The case is Morgan v. Sundance Inc., which began as a lawsuit from Robyn Morgan, who worked at an Iowa Taco Bell, and it later became a class action against the company. She accused Sundance of not paying her and her co-workers all they were owed.
LAW・2 DAYS AGO
The Independent

The trial of British socialite Ghislaine Maxwell has adjourned for the weekend in New York City. The59-year-old is answering to charges related to her alleged involvement in financier Jeffrey Epstein’s sex crimes. Rounding out a week of testimony, on Friday, jurors were shown video footage of the inside of the Palm Beach house at the centre of the allegations. Epstein’s massage table, where much of the abuse is alleged to have occurred, was brought into the courtroom.His former housekeeper, Juan Alessi, testified in detail on Thursday afternoon about his duties at the Palm Beach mansion, what he saw happen there,...
PUBLIC SAFETY・10 HOURS AGO

"Today's announcement should serve as a warning shot to anyone thinking about participating in organized retail theft." Officials announced five people have pleaded guilty to one of largest retail theft busts in California history.
22 HOURS AGO
Business Insider

Brandon Fellows submitted several filings in which he lashed out against his previous counsel and admitted to committing obstruction.
POLITICS・1 DAY AGO
ABC 10 News KGTV

Facebook parent Meta Platforms Inc. attempted again to undercut the Federal Trade Commission's antitrust lawsuit against the social media giant with its latest federal court filing Wednesday. "[R]ather than plead facts that could show monopoly power, [FTC] relies on inapposite statistics and admitted assumptions to dress up conclusory speculation," Meta said in a filing. "The FTC still has not identified a single commercial actor, anywhere, that recognizes a [personal social networking services] market as defined, much less tracks PSNS usage in a way that might permit assessment of market shares." The FTC sued then-Facebook for engaging in an illegal "buy or bury" scheme by snapping up rivals Instagram and WhatsApp.
BUSINESS・2 DAYS AGO

A federal magistrate judge on Monday urged the Colorado State Public Defender’s Office to reconsider its decision to deny representation to a low-income couple in Larimer County, calling the office’s refusal “a wrong.”. Magistrate Judge Scott Varholak then went on to rule against the couple, finding he could not force...
3 DAYS AGO
Fox News

California BLM supporter accused of driving into crowd had her rights violated during hearing, judge rules

A California supporter of Black Lives Matter had her constitutional rights violated at a recent hearing over whether she should face trial on accusations that she deliberately drove into a crowd of counterprotesters in September 2020, a judge ruled Friday, according to a report. During the hearing, Tatiana Turner’s defense...
CALIFORNIA STATE・14 DAYS AGO
hotnewhiphop.com

Drake Faces $4 Billion Lawsuit From Woman Who Broke Into His House: Report

As Drake switches up his haircut and has YK Osiris belting out songs to settle debts, he also has been dealing with a strange legal case. One would think that if someone is caught trespassing on your property, you would be able to take them to court, but a woman named Mesha Collins is suing the rapper, instead.
CELEBRITIES・21 HOURS AGO
BBC

Ex-nurse gets 10 years in prison for raping incapacitated patient

An Arizona man has been sentenced to 10 years in prison for sexually assaulting an incapacitated woman who gave birth at a clinic where she was under his care. Ex-nurse Nathan Sutherland was accused of raping the victim, who has severe disabilities, at the Hacienda HealthCare facility in Phoenix. He...
PUBLIC SAFETY・1 DAY AGO

Jussie Smollett's Lawyer Accuses Judge Of 'Physically Lunging' At Her, Gets Shut Down In Demand For Mistrial

One of Jussie Smollett's lawyers royally pissed off the judge after claiming your honor "lunged" at her from behind the bench. Tamara Walker made the explosive claim against Judge James Linn on Thursday after the jury walked out of the room. It all reportedly started over a "collateral" comment Walker made in front of the jury.
CELEBRITIES・1 DAY AGO
Telegraph

Ghislaine Maxwell's accuser told a court in New York on Wednesday how she was introduced by Jeffrey Epstein to Donald Trump at his Florida resort and took part in one of his beauty pageants, as the defence challenged her memory of the alleged abuse she suffered. On the third day...
POTUS・2 DAYS AGO
POLITICO

NEW YORK, Dec 3 (Reuters) - A lawyer for Donald Trump on Friday urged a U.S. appeals court to find the former president immune from author E. Jean Carroll's defamation lawsuit arising from her allegation that he raped her, an argument Carroll's lawyer said would put him "above the law."
POTUS・1 DAY AGO

NEW YORK - The savage attack of a female correction officer last month appeared to have prompted the acting commissioner of the state prison system to issue a memo about a trend of "extremely disturbing assaults," said the union that represents officers. Officer Adrea Adamczyk, a five-year veteran at the...
NEW YORK CITY, NY・3 DAYS AGO
HuffingtonPost

D.C. Metropolitan Police Officer Michael Fanone, who was brutally attacked by Donald Trump supporters during the assault on the U.S. Capitol, said the newly released FBI interview with the assailant who drove a stun gun into Fanone’s neck on Jan. 6 illustrates how the former president “manipulated” his followers. “If...
PUBLIC SAFETY・2 DAYS AGO
KNX 1070 News Radio

A former anesthesiologist pleaded guilty today to involuntary manslaughter in the death of a fellow doctor who was undergoing outpatient surgery in Beverly Hills.
BEVERLY HILLS, CA・20 HOURS AGO
Times of San Diego

A federal judge sentenced the managers of a San Diego gold exchange business Friday for financial crimes stemming from a long-running money laundering operation. According to the U.S. Attorney’s Office, Global Gold Exchange LLC, and managers Richard M. Owen, 52, James Warren, 50, and Jeffrey Morrow, 46, laundered money from a number of illicit sources. They then fraudulently documented the activity as gold transactions.
SAN DIEGO, CA・19 HOURS AGO