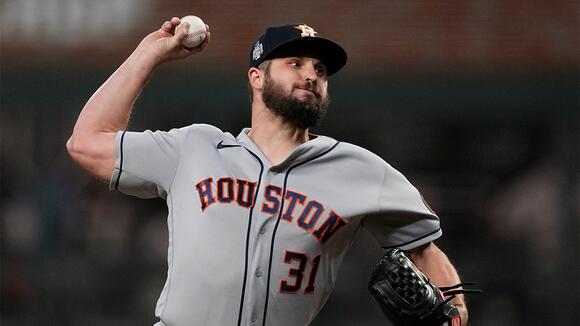 Astros right-handed reliever Kendall Graveman did a great job in late inning work for the Astros, but now he's moving on. Graveman signed a three-year deal with the Chicago White Sox at $24 million on Tuesday, a source confirmed to ESPN's Jesse Rogers. Graveman, a seven-year MLB veteran, joined the Astros on July 27 in a intra-division trade with the Seattle Mariners. After going 4-0 with a 0.82 ERA and 10 saves in 30 appearances in Seattle, he helped bolster the Astros' bullpen down the stretch, going 1-1 with a 3.13 ERA in 23 appearances. During his time with the 'Stros, he was arguably the most valuable addition to the bullpen. Here is a breakdown. Graveman struck out batters at a higher rate for Houston than he did in Seattle. However, according to his stats page on the MLB website, Graveman's walk rate is worse with the Astros than it was in Seattle. One thing everyone should look out for is his secret weapon: a 97 mph sinker. With the White Sox, he is likely to be among the primary setup men behind closer Liam Hendriks. News of Graveman's deal was first reported by MLB Network. ESPN contributed to this report.

By Dave Savini and Michele Youngerman CHICAGO (CBS) — There are new developments in a parking scam first exposed by the CBS 2 Investigators. Conmen have been ripping off fans outside Chicago sports venues for years. Posing as parking attendants, they lure in drivers, take their cash, and often guide them into illegal parking spots. Those fans later find parking tickets from the city on their cars. (Credit: CBS 2) Nothing stopped the men we uncovered running an illegal parking scam – not even the different teams of officers patrolling the city streets outside Guaranteed Rate Field. The scammers are so bold they continued...
CHICAGO, IL・1 DAY AGO
Chicago Sun-Times

Oscar Colas was 16 the first time White Sox international scouting ace Marco Paddy got an extended look at him. It was 2015 at the U-18 Baseball World Cup in Osaka, Japan, and Colas was playing all over the field for the squad from Cuba, which also featured Luis Robert.
MLB・2 DAYS AGO
kion546.com

CHICAGO (AP) — The Chicago White Sox have added another name to their rich Cuban history, agreeing to a contract with outfielder Oscar Colás. Considered one of the top international free agents, Colás received a $2.7 million signing bonus. The team also announced it had agreed to terms with outfielder Erick Hernández that included a $1 million bonus. The 23-year-old Colás is from Santiago de Cuba. Colás. He bats and throws left-handed and hit .282 with 28 homers and 116 RBIs in 187 games over his foreign league career.
NFL・2 DAYS AGO
FanSided

Clock is ticking on the Chicago White Sox winning a title

Chicago Sun-Times writer Daryl Van Schouwen penned an article recently on the Chicago White Sox window of opportunity to win a title being open but with the caveat that it might not be open for long. The White Sox should be favored to win the American League Central this season...
MLB・1 DAY AGO

As the offseason rolls on and fans wait for the lockout to end, there has been a reoccurring theme in the Chicago White Sox free agency wishlist. Second base, right field, and pitching depth have dominated the conversation. There is a good reason for this. After the White Sox traded...
MLB・11 HOURS AGO
FanSided

The Chicago White Sox and Major League Baseball are locked out. There isn’t much news to report on at the Major League level but that doesn’t mean Rick Hahn and his staff aren’t hard at work. We have known through insiders over the past couple of weeks that the White Sox are signing some international prospects.
MLB・2 DAYS AGO
soxmachine.com

At long last, the White Sox made their two biggest international signings official this morning, and at the reported amounts. Cuban outfielder Oscar Colás is in the fold at $2.7 million, while Dominican outfielder Erick Hernández signed for $1 million even. Enough time has passed that we’ve already...
MLB・2 DAYS AGO
soxmachine.com

After posing for photos with his two most noteworthy signings of this year’s international class, Marco Paddy talked to reporters about Oscar Colás and Erick Hernández to paint a more thorough picture than the few sentences in the official press release. And Paddy might have a more...
MLB・12 HOURS AGO

BOSTON (CBS) — David Ortiz got a very important phone call on Tuesday night, letting him know that he is now a Baseball Hall of Famer. Big Papi was pretty pumped to receive that call. Ortiz was in the Dominican Republic surrounded by family and friends — including former Boston teammate and fellow Hall of Famer Pedro Martinez — when he received the news from Jack O’Connell of the BBWAA. “I’m calling you from Cooperstown, New York to let you know that the baseball writers have elected you to the National Baseball Hall of Fame,” O’Connell told Ortiz. With that, Ortiz threw his...
MLB・2 DAYS AGO
CBS Boston

BOSTON (CBS) — It wouldn’t be Hall of Fame season if a member of the baseball media wasn’t twisting himself into a pretzel for all the world to see. Enter Jack Curry of the Yankees’ broadcast network. Curry revealed his ballot on Tuesday, which is the day that the Baseball Hall of Fame will announce which players — if any — will earn enshrinement this year. Curry used eight of his allowable 10 votes this year, and for the first time in their 10 years of eligibility, Barry Bonds and Roger Clemens received his vote. The reason Curry hadn’t voted for Bonds and...
MLB・2 DAYS AGO
USA TODAY

"You can make a case that he's the best player to ever play," Jim Leyland said of Barry Bonds, whom he managed with the Pittsburgh Pirates.
MLB・1 DAY AGO
USA TODAY

Alex Rodriguez, a three-time MVP whose 696 home runs trail only Barry Bonds, Hank Aaron and Babe Ruth, received just 34.3% of the votes in his debut.
MLB・2 DAYS AGO

MLB Network’s Rob Parker did not vote for David Ortiz citing a gray area with PEDs, but he voted for Barry Bonds, Roger Clemens and Sammy Sosa, leading to one of his colleagues to call him out.
MLB・2 DAYS AGO
92.9 The Game

Will the Atlanta Braves be able to sign Freddie Freeman? Will Major League Baseball play 162 games this year? What is the big hold up in the MLB negotiations?
MLB・2 DAYS AGO
WEEI Sports Radio

David Ortiz was voted into the Baseball Hall of Fame Tuesday, while Barry Bonds and Roger Clemens were shut out. That’s total insanity. They should all be in.
MLB・1 DAY AGO
CBS Boston

BOSTON (CBS) — While David Ortiz got his call to the National Baseball Hall of Fame on Tuesday, four polarizing and controversial players in baseball history did not. For Roger Clemens, Barry Bonds, Curt Schilling and Sammy Sosa, Tuesday was their last chance to make it to Cooperstown by way of traditional voting. All four fell short of getting the required 75 percent of votes in their tenth and final season on the ballot, with Bonds getting 66 percent, Clemens 65.2 percent, Schilling 58.6 percent and Sosa just 18.5 percent. Those four will no longer appear on the BBWAA ballot, so...
MLB・2 DAYS AGO
USA TODAY

David Ortiz needed just one swing to power his way into baseball’s Hall of Fame, narrowly punching his ticket to Cooperstown.
MLB・2 DAYS AGO
Inside The Dodgers

The 2021 season was one heck of a roller coaster for Max Muncy. The slugging first baseman carried the Dodgers in the first half with his bat, which resulted in him being in early MVP conversations.  But that first half was short-lived as Muncy came tumbling back to earth in the second half, ...
MLB・1 DAY AGO
Sportsnaut

From a pure on-field standpoint, Barry Bonds is considered the most-feared hitter in the modern history of Major League Baseball.
MLB・2 DAYS AGO
670 The Score