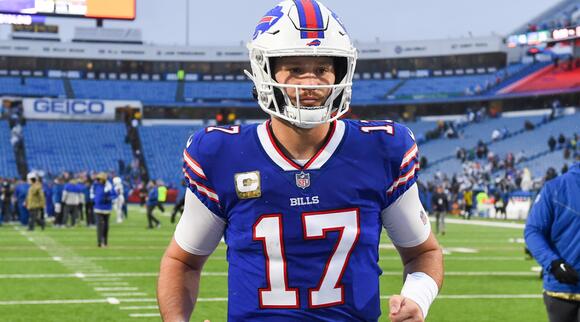 Analyzing the player props to target when Josh Allen and the Bills head to New Orleans to take on the injury-ravaged Saints.

Both the Bills and Saints are coming off losses and looking for a win in Thursday night’s Thanksgiving game.

Buffalo is favored by 6.5, and it should be. Buffalo has Josh Allen and one of the league’s top defenses. The Saints have second-string QB Trevor Siemien under center, and a defense that has surrendered the fourth-most passing yards (1,098) and the second-most passing touchdowns (8) to enemy QBs across their last four contests.

Buffalo is 5-4-1 Against The Spread (ATS) this season, and their games have exceeded the projections 50% of the time. The Bills 2-2 this year as the away favorite.

New Orleans is 5-5 ATS, and their games have exceeded the projections 60% of the time. The Saints won their only home game this year as an underdog.

Buffalo’s run defense has been stout all season, allowing only 86 yards per game to opposing running backs, although it allowed 264 rushing yards to Jonathan Taylor and the Colts in last week's loss. If you remove that game, the Bills are allowing only 58.8 yards per game. The Saints will likely still be without Alvin Kamara and possibly Mark Ingram. I don’t see New Orleans gaining much in the ground game Thursday.

The Saints have also been strong against the run, allowing only 66 yards per game to opposing running backs. We have never counted on the Buffalo run game, so this number doesn’t move the needle for me.

The Bills average 39 passing attempts per game, Josh Allen has no shortage of weapons and they should be able to put plenty of points on the board.

The Superdome will be rocking and the Saints are looking to snap a three-game losing streak, but Allen and the Bills win. Look for New Orleans to put up a fight and cover the spread if Ingram or Kamara are available. Both defenses are trending in the wrong direction, and I expect the game total to go over 46.

The Saints have allowed five rushing TDs to opposing quarterbacks across the last four games, including three to Jalen Hurts last Sunday. The Bills don’t have much of a run game, and Allen, who has three rushing scores, will find his way into the end zone.

The Saints have allowed an average of 270 passing yards and 8.91 yards per attempt to opposing QBs across the past four contests. Meanwhile, Emmanuel Sanders is commanding 30% of the team’s air yards and 16% of the team’s targets. His average depth of target is 16.64, and I think we will see Allen show off his big arm on Thursday. Sanders has exceeded this prop in seven of ten games this season.

Get fantasy and betting analysis in your inbox by signing up for the Winners Club newsletter .

Patrick Mahomes dropped his helmet and wrapped his arms around another player on the field. But it wasn't someone in red and gold. It was Josh Allen.
NFL・2 DAYS AGO
Sportsnaut

Super Bowl 2022: The Tampa Bay Buccaneers are the reigning NFL champions, but who'll make the playoffs — and lift the Lombardi Trophy at the end of this season?
NFL・4 HOURS AGO
Sportsnaut

NFL rules state that if the team that wins the coin toss in overtime scores on the opening drive, the game is over.
NFL・2 DAYS AGO
WWL-AMFM

Remember Eli Apple? He found a home with the Cincinnati Bengals, and he’s helped his team reached the AFC Championship. But he took some time to send a not-so-friendly shoutout to his former home of New Orleans. See more on WWL and Audacy.
NFL・2 DAYS AGO
Sportsnaut

The New Orleans Saints have now officially started a new era. It began following the retirement of long-time quarterback Drew
NFL・1 DAY AGO

With only 13 seconds left in regulation, Patrick Mahomes delivered a drive for the ages when he set up the Chiefs for a game-tying field goal.
NFL・2 DAYS AGO
Sports Illustrated

Josh Allen played an incredible game in a losing effort against the Kansas City Chiefs on Sunday night, and fans at Arrowhead Stadium clearly appreciated what they saw from the Buffalo Bills star. They have since come up an awesome way to show it. More than 9,500 Chiefs fans this...
NFL・10 HOURS AGO
Sportsnaut

It was easy for the Saints to go all in when they had one of the league’s top coaches and play-callers. But they have to be ready for what comes next.
NFL・1 DAY AGO
The Spun

Saints pass rusher Cameron Jordan is pretty surprised that Sean Payton has decided to step away from the team. After the news came out, Jordan tweeted about how Netflix just made a movie about how Payton took a year off and thought that was a one-time thing. Netflix has the...
NFL・1 DAY AGO
WFNZ 102.5 FM/610 AM

The NFL had itself a near-perfect weekend, but one glaring issue fans and some of the league’s players are complaining about, and it’s the dreaded overtime rule.  Following the superb AFC Divisional Playoff matchup between the Kansas City Chiefs and Buffalo Bills, which saw the Bills lose to the Chiefs in overtime, there have been […]
NFL・1 DAY AGO
CBS Boston

Hurley: The NFL’s Overtime Rules Are Fantastic, And They Should Never Be Changed

By Michael Hurley, CBS Boston BOSTON (CBS) — A playoff game ended in overtime after one single possession, which can only mean one thing: People are going to complaaaaaaain. But not me. Not this sports fan. I’m here solely to speak the truth. The raw, unfiltered truth: The NFL’s overtime rules are fantastic. Let’s hope they never change. For whatever reason, whenever a team loses without getting the football in overtime, the word “fair” starts to get thrown around. Josh Allen didn’t touch the ball in OT — it’s not fair! Well … yeah. That’s right, Bobby. It’s not fair. It’s a competition. For a...
NFL・2 DAYS AGO
WGR550

Beane: Loss to Chiefs wasn't a step back for Bills

Buffalo Bills GM Brandon Beane met with the media Wednesday, in-person, for over an hour. He discussed a wide range of topics. Here’s a look at plenty of what he said.
NFL・5 HOURS AGO
Sports Illustrated

Mailbag: Could the Packers Tag Davante Adams and Trade Him for a First-Round Pick?

Why Green Bay would have trouble with such a maneuver, and of course Aaron Rodgers is a complicating factor.
NFL・4 HOURS AGO
Yardbarker

Sean Payton is out as New Orleans Saints head coach in what is a rough stretch for the organization. First it was Drew Brees retiring following the 2020 season. Now the head coach is gone even though he had three years left on his contract. Payton is speaking with the...
NFL・1 DAY AGO
Insider

With just two games left before Super Bowl LVI, there's still plenty to bet on this weekend, from first touchdown scorer to a slew of prop bets.
NFL・3 HOURS AGO