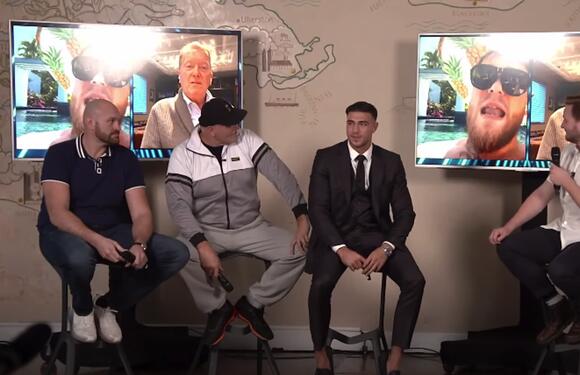 Tempers flared between Jake Paul and Tommy Fury ahead of the pair’s highly-anticipated fight next month in Tampa Bay.

With Paul dialled in through Zoom, and relaxing at a swimming pool in Puerto Rico, the exchange quickly went off the rails.

Fury was joined by world heavyweight champion and brother Tyson Fury in addition to his father John Fury.

Both men appeared confident from the outset with Fury maintaining he will “break Paul’s face completely”, while the YouTube star is adamant this will be “an easier fight than Tyron [Woodley]”, which saw Paul emerge victorious via decision against the former UFC champion .

“Fighting wins fights,” insisted Fury. “I’m not engaging in this. I’m not on Instagram as I don’t care. When he jumps through the ropes and realises I’m not a YouTuber and gets a jab landed on that chin, he’ll be saying, ‘pull me out’.

“This is easy money for me. I’m going to rob the bank, thank you very much. I can’t miss that jaw. I’ll bust you up.

“I’ll break your face completely in. I hope you’re ready. You’re an absolute state and will get a reality check.”

While Paul also exchanged insults with Fury’s father, calling him “a cringe old man” after a series of vulgar insults were directed at his girlfriend.

The world heavyweight champion also chipped in, backing his younger brother to “knock Paul into next week”.

But rather than react negatively to the WBC champion, Paul thanked him for helping to hyping the fight, even suggesting, “he should be getting paid Tommy’s purse, he’s promoting the fight more than Tommy.”

The pair then recalled a brief encounter at Paul’s afterparty following the Woodley fight, which saw Fury also feature on the undercard with a routine points win over Anthony Taylor .

Fury maintains Paul reacted angrily to discovering he was attending his party and ordered security to remove him and his group of friends.

While Paul maintains Fury was previously cordial with him after meeting years ago, adding: “Tommy asked me for a picture at Ricky Hatton’s gym!”

Promoter Frank Warren insists Fury will deliver a “reality check” to Paul, but admits the YouTube star deserves praise for stepping up to the challenge against a professional boxer.

“I am excited, it’s very exciting, I’ve never been involved in anything like this,” Warren said. “This is an ongoing anti-social media feud. It’s getting worse!

“Come the night, the talking will be done. Jake Paul has done brilliantly, he’s taken himself seriously. He’s not got an amateur background, Tommy has, from a traditional boxing family, with seven pro fights.

“This is a reality check for Jake, I expect Tommy to win this fight and be successful. Jake has a big point to prove. I take my hat off, he’s stepping up to the plate, this is in front of the world, a huge audience, new to me, but the winner of this fight, which I believe will be Tommy, will be one of the most famous people on the planet. I’m so excited!”

Dana White's war of words with Jake Paul has escalated into a huge rivalry, and now one retired UFC star has offered to take on the YouTuber for his former boss, in exchange for a UFC title fight. Paul has made a name for himself in the boxing world by...
UFC・2 DAYS AGO
USA TODAY Sports Media Group

Jake Paul appears to be serious about move to MMA

Editor’s note: This article was originally published at MMAJunkie.com. If Jake Paul is serious about crossing over into MMA, the PFL appears to be equally as serious in having him. Last week, Sports Business Journal reported that the PFL was in “early talks” with Paul and his agent, Nakisa...
COMBAT SPORTS・2 DAYS AGO
ABC13 Houston

The Pauls hit Houston! The brothers are set to host a one-night event at Cle nightclub.
HOUSTON, TX・1 DAY AGO
hotnewhiphop.com

Ever since Jake Paul put former NBA star Nate Robinson to sleep in their November 2020 celebrity boxing match, he has fully committed to his boxing career, and has drawn more and more eyes with each of his fights. In 2021, Paul participated in three different fights, with two of...
COMBAT SPORTS・1 DAY AGO

Subject of viral video sounds off on Nate Diaz after flinching incident: 'You think this man is a gangster?'

The man who was caught on video spilling his beer because of Nate Diaz has identified himself, and he’s none too pleased about the situation – or the fact that people herald Diaz as a “gangster.”. In a viral video posted early Sunday morning, Diaz is seen...
TAMPA, FL・27 DAYS AGO
The Independent

John Cena has revealed he had three beers before taking on The Undertaker in a surprise match at WrestleMania 34.Cena took on the iconic WWE wrestler at the event in 2018 before both stars retired from the sport. Cena took his bow in 2021 and The Undertaker, real name Mark Calaway, retired in 2020. Cena has now said he had three beers ahead of the clash.“Everybody is chilled and watched the show,” he told Pat McAfee on his podcast Then I made great friends with some people who traveled from Australia, people who traveled from across the US, buying each...
WWE・2 DAYS AGO
The Independent

Tyson Fury has doubled down on his call-out of Francis Ngannou, laying the foundations for a “clash of the titans” in Las Vegas.Fury is WBC heavyweight boxing champion, while Ngannou holds the UFC heavyweight title, and the pair have expressed interest in fighting one another.French-Cameroonian Ngannou this month tried to goad Fury into an MMA contest with boxing gloves, but the Briton said he would prefer a boxing match with MMA gloves.Fury has now reiterated his desire to box Ngannou, whose first UFC title defence is scheduled for the main event of UFC 270 next week.“Think of the clash...
UFC・2 DAYS AGO
ClutchPoints

Francis Ngannou is heading into his possible last fight in the UFC when he defends his heavyweight title on January 22. The Cameroonian heavyweight recently revealed some of the demands he has for his new contract, they involve boxing. Francis Ngannou isn’t simply motivated by money, he has always wanted...
TYSON FURY・13 DAYS AGO

YouTube star Logan Paul has opened up about his marijuana use, claiming he became dependent on weed and experienced “aggressive” withdrawals when he quit. Logan Paul is one part YouTube superstar, one part budding pro boxer, and one part NFT connoisseur. The social media mogul has been open...
CELEBRITIES・11 DAYS AGO
The Independent

Kamaru Usman has offered his prediction for the main event of UFC 272 in March, with friends-turned-rivals Jorge Masvidal and Colby Covington set to go head-to-head.Usman has successfully defended the UFC welterweight title against both men twice, most recently outpointing Covington in November.While Usman’s rivalries with both fighters have been somewhat intense, they do not compare to the dynamic between Masvidal and Covington, whom fans have wanted to see compete in a grudge match for a number of years.Per the Mirror, Usman was asked to predict the winner of that fight on Snapchat, and the Nigerian-American simply replied: “Colby.”Usman...
UFC・2 DAYS AGO
The Independent

Following one of the most successful and engrossing years in the history of the UFC, the mixed martial arts promotion will look to keep building in 2022.2021 saw Conor McGregor fight twice, marking his most active year since 2016. The Irishman lost to Dustin Poirier in each outing, suffering a horrific broken leg in the most recent, but he is targeting a summer return to the Octagon.Elsewhere, newer stars like Israel Adesanya, Khamzat Chimaev and Sean O’Malley will look to further enhance their legacies and profiles, while featherweight queen Amanda Nunes will surely seek to regain her bantamweight belt...
UFC・1 DAY AGO
The Independent

Kamaru Usman’s next welterweight title defence will “100 per cent” come against Leon Edwards, according to UFC president Dana White.Usman (20-1) won the belt from Tyron Woodley in 2019 and has since retained it five times – against three different opponents.The Nigerian-American has twice successfully defended the gold against Jorge Masvidal and Colby Covington respectively, with his most recent win coming against the latter in November. Between those bouts, Usman beat friend and former teammate Gilbert Burns.Now, Usman is set for another rematch, with White confirming that Briton Edwards (19-3) will challenge the 34-year-old next.“One hundred per cent,” the...
UFC・2 DAYS AGO

Brendan Schaub, American podcast host, has come to his good friend Joe Rogans’ defense after medical experts call for Spotify to “establish a clear and public policy to moderate misinformation on its platform.”. The letter stated: “By allowing the propagation of false and societally harmful assertions Spotify is...
CELEBRITIES・2 DAYS AGO
The Independent

UFC London: Dana White says announcement could come ‘in next couple of weeks’

An announcement around UFC London could come in the “next couple of weeks”, according to the promotion’s president Dana White.A London card was held in February or March each year between 2016 and 2019, with the 2020 edition of the event cancelled due to the coronavirus pandemic.No card was held in the English capital in 2021, but White has suggested that British fans will soon receive good news around an event.“I’m just gonna tell you this: We will be coming to London, we’re gonna figure London out,” the UFC president told BT Sport.“I’d like to announce in the next...
UFC・2 DAYS AGO
WFAN Sports Radio

The Fight Fan: Previewing what's to come in UFC in first quarter of 2022

On the latest episode of The Fight Fan, Pete Hoffman previews what’s to come in the UFC in the first quarter of 2022, and previews UFC on ESPN 32.
UFC・1 DAY AGO
HOLAUSA

Kanye West is giving Julia Fox an immersive experience into his life. After meeting in Miami and having highly publicized dates in New York City, the rapper flew with the actress to Los Angeles to spend some time with Ye’s famous friends, including Madonna, Floyd Mayweather, Antonio Brown, and others.
CELEBRITIES・2 DAYS AGO
The Independent

The UFC’s heavyweight titles will be unified in the main event of UFC 270 this weekend, as Francis Ngannou defends against interim champion and former teammate Ciryl Gane.Ngannou (16-3) is 11-2 in the UFC, with 10 of his wins in the promotion coming via knockout/TKO and the other by way of submission. Most of the French Cameroonian’s KOs come very early, and in his last bout he knocked out Stipe Miocic in the second round to take the American’s heavyweight title.That was in March, with Ngannou avenging a decision defeat by Miocic in the process, while Gane (10-0) fought...
UFC・7 HOURS AGO
Sportsnaut

In the main event of UFC 270 this Saturday, Francis Ngannou makes the first defence of his heavyweight title as he comes up against interim champion and former teammate Ciryl Gane.Ngannou is 16-3 in professional mixed martial arts and 11-2 in the UFC, with all of his wins in the promotion coming via stoppage – 10 by knockout/TKO and one by submission. In his last outing, the French-Cameroonian avenged a 2018 decision loss to Stipe Miocic by knocking out the American to take his heavyweight title in March.Meanwhile, Gane (10-0) is more known for his speed and technicality than...
UFC・7 HOURS AGO