How Rich Is Meghan Markle? 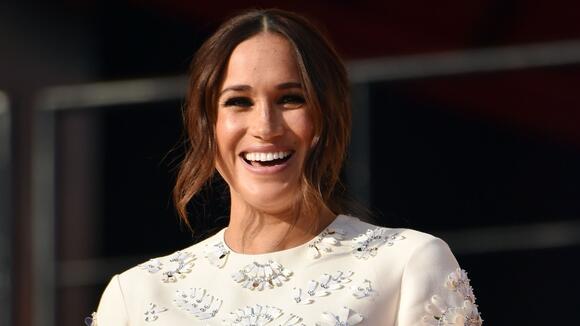 Meghan Markle, the Duchess of Sussex, may be wealthy, successful and outspoken, yet she seems to spark an excessive amount of controversy with many of her actions.

Find Out: How Rich Is the British Royal Family?
Read: Meghan Markle and More Americans Made Royal by Marriage

In the final few months of 2021, Markle’s lawyer, Jenny Afia, defended allegations that Markle bullied staff members at Kensington Palance. Markle also wrote a letter trying to make amends with her estranged father. And the mother of two and wife of Prince Harry appeared on “The Ellen DeGeneres Show” with a performance that one royal author said “embarrassed the royal family.”

Amid the controversy, Markle has maintained a net worth of $60 million between herself and her husband, Prince Harry, according to Celebrity Net Worth. Although her marriage to the prince gave her the titles of Duchess of Sussex, Countess of Dumbarton and Baroness Kilkeel, Markle came into the marriage with her own money and career — and a net worth of $2 million when they walked down the aisle. The couple, who separated from the royal family in early 2020, gave away their rights to the money Harry received through his royal lineage.

More: The Most Surprising Jobs Held by Royals

In March 2020, Prince Harry told Oprah Winfrey that he and Markle had been cut off financially from the royal family and were relying on a reported $13 million trust Prince Harry inherited from the estate of Princess Diana. Since then, however, the couple has amassed incredible wealth of their own.

After leaving the royal family and moving to Markle’s home state of California, they signed a five-year, $100 million production deal with Netflix to produce feature films, children’s programming and documentaries, Celebrity Net Worth reported. They also signed a deal with Spotify for $18 million to expand their creative endeavors into podcast production and hosting. While contract terms were not announced, the deal could be worth as much as $35 million, one industry expert told Newsweek.

Read More: How Rich Are Queen Elizabeth and the Rest of the British Royal Family?

In June, Markle’s first book, “The Bench,” was released, and it wound up as a New York Times bestseller. British media reported she could have received an advance of as much as $700,000 for the book, which is a story about fathers and sons.

Publisher Penguin Random House announced in July that it had purchased the rights to Price Harry’s “literary memoir” and that it was tentatively scheduled for a late 2022 publication. The company did not confirm reports in the British press that the deal is for four books, one of which will be a “wellness guide” penned by Markle. The Daily Mail reported the book contract could be worth as much as $40 million .

Markle grew up in Hollywood, where her mother was a yoga instructor and her father was an Emmy-winning lighting director. Markle attended private schools and graduated from Northwestern University with degrees in theater and international studies. She went on to pursue a career as an actress, first appearing in small roles on “General Hospital,” “Century City,” “CSI: NY” and “Fringe” in the early 2000s. She earned extra income as a model, appearing for a brief stint on “Deal or No Deal.”

Read More: 20 Billionaire American Dynasties and How They Made Their Money

In July 2011, after a few movie appearances including the film “Horrible Bosses,” Markle joined the cast of “Suits,” reportedly earning $50,000 per episode, or an annual salary of $450,000, according to Celebrity Net Worth. Appearing on the TV show until 2017, she brought in a total of roughly $4 million.

While she was filming “Suits,” she also launched a lifestyle website The Tig and positioned herself as an influencer, eventually amassing three million Instagram followers, 800,000 Facebook followers and 350,000 Twitter followers, Celebrity Net Worth reported. The site estimates she brought in roughly $80,000 per year from the blog before taking down the site and archiving the materials in 2017.

Using the money from their new media contracts in 2020, Meghan and Prince Harry purchased a $14.7 million Montecito, California estate, where they live with their two children. To purchase the property, they made a down payment of $5 million in cash and financed the rest with a $10 million mortgage, according to Celebrity Net Worth. They also paid back $3 million they used to remodel their home in Frogmore, U.K.

Jami Farkas and Sam DiSalvo contributed to the reporting for this article.

This article originally appeared on GOBankingRates.com : How Rich Is Meghan Markle?

We As Americans Do not care‼️ She never had anything until she Married into a royal family that she is trying to divide!!!!

Depends on how many Crown Jewels and Dianas jewelry she can stuff in her purse!

Hold on to your wallet. Due to inflation and prices surging for natural gas, heating oil, and other fuels, you will see a significant rise in your bills this winter. So if you've already opened your...
ENERGY INDUSTRY・3 HOURS AGO
GOBankingRates

We can all use a simpler, more efficient way to manage expenses and save money. Putting your bills on autopay can ensure never forgetting a due date, which minimizes the risk of late fees and...
CREDITS & LOANS・3 DAYS AGO
GOBankingRates

The 2022 COLA increases have been applied to new Social Security payments for January, and the first checks have already started to hit bank accounts. See: What To Expect From Social Security in...
BUSINESS・1 DAY AGO
Hello Magazine

Meghan Markle and her husband Prince Harry's stunning £11.2million Montecito home with their children Archie and Lilibet is undeniably luxurious, but the Duchess of Sussex lived in much more modest homes with her mother Doria Ragland as a child. The former Suits actress grew up in Los Angeles where...
CELEBRITIES・27 DAYS AGO

Searches for "Prince Harry King" reportedly surged after Queen Elizabeth did this to Prince William. Prince Harry continues to make headlines despite his graceful exit, alongside wife Meghan Markle, in January 2020. It was claimed that the Duke of Sussex has a rift with his brother, Prince William, and the other members of the royal family.
CELEBRITIES・26 DAYS AGO
DesignerzCentral

The Duke of Cambridge was left "reeling" with Meghan Markle over the comments she made about Kate Middleton in her Oprah Winfrey interview, it has been claimed by an expert. Prince William's "head was all over the place" after his sister-in-law accused Kate of making her cry over the now infamous bridesmaid dress fitting ahead of the Sussexes' 2018 royal wedding.
CELEBRITIES・8 DAYS AGO
Newsweek

Meghan Markle has been awarded $1.36 for breach of privacy in a case that exposed her personal messages—but she will get another sum for copyright infringement.
CELEBRITIES・14 DAYS AGO
Business Times

The controversies surrounding Prince Andrew have continued to develop these past few years. Things have even taken a shocking turn in the last few weeks after reports of Meghan Markle potentially testifying in the lawsuit have made headlines.
CELEBRITIES・9 DAYS AGO

The royal drama continues. Prince Charles, Prince Harry and Meghan Markle‘s relationship is still at odds despite the Prince of Wales’ recent invitation for the Duke and Duchess of Sussex to stay with him when they’re in the United Kingdom. A source told The Mirror on January 18, 2022, that Charles invited Harry and Meghan to stay with him and his wife, Camilla Parker Bowles, in the days before Christmas as a way for him to see his grandchildren. Charles has never met Harry and Meghan’s newborn daughter Lilibet Diana (named after his mother, Queen Elizabeth II, and his late ex-wife,...
CELEBRITIES・21 HOURS AGO
Elle

Meghan Markle remains at the center of controversies despite being no longer a working royal. She and Prince Harry exited the British Monarchy in their bid to live a more private life.
CELEBRITIES・12 DAYS AGO

Meghan Markle and Prince Harry previously launched six lawsuits in just more than a year—but did not bring any new cases in 2021.
CELEBRITIES・4 DAYS AGO
Business Times

Thomas Markle Sr. backed lawyer David Boies's suggestion of possibly deposing Meghan Markle as part of the civil suit against Prince Andrew. He recently stated that his daughter "should speak to law enforcement" in the United States if she knows anything about the matter, according to Express UK.
CELEBRITIES・5 DAYS AGO
romper.com

What Are The Odds That Prince Harry & Meghan Markle Will Go To The Oscars?

First there was the move to Montecito, California. Then there was the infamous interview with neighbor Oprah Winfrey. Then there was a deal with Netflix, another interview with another famous neighbor, Ellen DeGeneres. Really hitting all of Hollywood. What’s next for the Duke and Duchess of Sussex? Could it be a night at the 2022 Oscars, assuming, of course, that there will be a night at the Oscars this year? It seems that their attendance might boil down to one movie that struck a particular chord with Prince Harry and whether or not the star of said film is actually going to be on hand.
CELEBRITIES・4 DAYS AGO
Newsweek

It’s no secret that Piers Morgan has a problem with Megan Markle. He relentlessly Tweets about her, quit his job at Good Morning Britain after being asked to apologise for saying he ‘didn’t believe a word’ when she talked about having suicidal thoughts, and has now made borderline threatening remarks towards her as he starts his new position as a columnist at The Sun.
CELEBRITIES・9 DAYS AGO
UPI News

Jan. 5 (UPI) -- A British publisher has been ordered to pay Meghan Markle, the wife of Prince Harry, a little more than $1 in her victorious lawsuit over publication of a private letter she wrote to her father. Markle won the lawsuit last month against the Mail on Sunday...
U.K.・14 DAYS AGO
heatworld

Why Meghan Markle and Prince Harry are really selling up

Listen up, prospective homebuyers: are you in the market for a sprawling mansion in California, complete with 16 bathrooms, a gym, spa, cinema, wine cellar, tennis court and swimming pool and currently owned by a totally down-to-earth, low-key couple? If so, you’re in luck, Prince Harry and Meghan Markle are apparently looking to sell their Montecito mansion… for the bargain price of £11m.
CELEBRITIES・8 DAYS AGO
enstarz.com

Prince Harry and Meghan Markle on the Verge of Bankruptcy, Mansion Secretly Being Disposed?

Are Prince Harry and Meghan Markle on the verge of bankruptcy?. The Duke and Duchess of Sussex have previously stated that after stepping down from their high royal responsibilities in the British royal family, they wish to attain financial independence. However, as soon as they were self-sufficient, they began receiving...
MUSIC・2 DAYS AGO