(CBS4) – The Colorado Avalanche are riding a 5-game win streak and coming off an exciting 7-5 win over the Ottawa Senators . That has placed positive notice back on the Avs, and at a time when the hockey team’s superstar is watching from the bleachers.

Heading into the Thanksgiving week with a step ahead on the ice is always considered a notable measure of a team nearing the halfway mark of the NHL season. The CBS Sports pre-Thanksgiving NHL rankings boosted the Avs up three spots to put them at No. 10, as the league’s contenders come into focus. 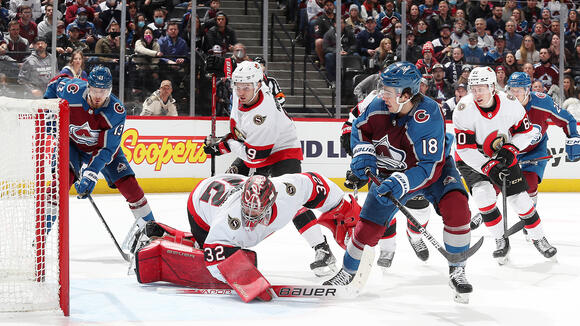 Alex Newhook of the Colorado Avalanche shoots and scores against goaltender Filip Gustavsson of the Ottawa Senators at Ball Arena on Monday. (credit: Michael Martin/NHLI via Getty Images)

“Don’t look now, but the Avalanche have won [five] straight games and might be finding some kind of rhythm just in time for Thanksgiving,” CBS Sports writer Austin Nivisin reported . “They’ve even been able to do that without Nathan MacKinnon. On a team loaded with superstars, Nazem Kadri has been leading the way. He is on an eight-game point streak right now.”

Thanksgiving day has been considered a hallmark point in the season when it comes to the teams that have a clear chance at a Stanley Cup playoff berth. Things can always change, as some teams lower in the standings go on miracle runs during the second half of the regular season. But most will agree it’s best to feel confident and with a good foothold in the standings during the holiday season.

“Outside of the very best and the very worst, there are still some blind spots, however,” Nivision wrote. “Because the NHL creates a standings point out of thin air for overtime games, there are a lot of teams in the thick of the playoff race at this point in the season. The trouble is trying to sort them out at this time of year, but I gave it my best shot.”

The Colorado Avalanche will take more shots on the ice when they host the Anaheim Ducks at home at 7 p.m. Wednesday night.

The NHL season officially started back on October 12. In this article, we track all the NHL games today as
NFL・17 HOURS AGO
News 12

Vegas Golden Knights winger Reilly Smith is one of the hottest names leading up to the NHL trade deadline. With
NHL・11 HOURS AGO
Buffalo News

A News staffer since 1987, I'm a Baseball Hall of Fame voter, a 2013 inductee into the Buffalo Baseball HOF and the Buffalo chapter chair of the Professional Hockey Writers Association. And I insist only Chicago & New York can come close to Buffalo pizza. Through Friday's games. Last week's...
NHL・2 DAYS AGO

Most teams have either passed, reached, or about to hit the halfway point of the season. In our latest Power Rankings, it’s becoming clear that the Eastern Conference is dominating. December had four teams in the Western Conference in the Top Ten. This month, it is down to three with the Colorado Avalanche breaking into the Top Five at number three.
NHL・2 DAYS AGO
WGR550

Rasmus Ristolainen made his return to Buffalo on Saturday for his first career game against the Sabres. Paul Hamilton has more on his return, plus some postgame thoughts on Buffalo’s 6-3 win over the Flyers:
NHL・2 DAYS AGO
Sportsnaut

BOSTON (CBS) — The Bruins will be a little shorthanded along the blue line as they wrap up a seven-game homestand. Defenseman Matt Grzelcyk will be sidelined on Monday night when the B’s welcome the Anaheim Ducks to TD Garden. Grzelcyk briefly left Saturday’s win over the Jets after being sent into the boards by Winnipeg’s Pierre-Luc Duboius in the first period. He did return to the game and finished with 13:35 of ice time, and was credited with an assist on David Pastrnak’s game-winning goal in the third period. Head coach Bruce Cassidy was cautiously optimistic that Grzelcyk avoided a serious...
NHL・12 HOURS AGO
San Diego Union-Tribune

Justin Faulk had a goal and an assist and the St. Louis Blues beat the undermanned Vancouver Canucks 3-1
NHL・22 HOURS AGO
247Sports

Auburn was itching for Kentucky, and the No. 2 Tigers delivered an 80-71 win over the No. 12 Wildcats. CBS Sports took note in Sunday's updated Top 25 and 1 college basketball rankings, keeping Auburn high. Kentucky can point to injuries to TyTy Washington and a mangled Sahvir Wheeler, but...
COLLEGE SPORTS・1 DAY AGO
Sportsnaut

Ryan Pulock has now missed 22 games and counting with a lower body injury, but if there’s a silver lining to his absence, Peter Schwartz writes that it’s the emergence of Robin Salo and Noah Dobson.
NHL・9 HOURS AGO
NBC Sports

The 2022 NFL Playoffs are underway and today’s lineup features back-to-back Divisional Round games that you won’t want to miss. The action begins on NBC and Peacock this afternoon as Matthew Stafford and the LA Rams head to Raymond James Stadium to take on Tom Brady and the Tampa Bay Buccaneers. Live coverage begins at 2:00 p.m. ET with Football Night in America. Kickoff time is at 3:00 p.m.
NFL・1 DAY AGO
Sportsnaut

In a discussion about injuries, NHL great Bobby Orr once told Philadelphia Flyers defenseman Keith Yandle: “If you can skate, you can play.’’
NHL・17 HOURS AGO
ESPN

The anticipation of Saturday's Auburn vs. Kentucky game was second to none for a conference game this season. Two Final Four contenders playing their best basketball of the 2021-22 men's college basketball season, with a No. 1 pick favorite (Jabari Smith) battling in the frontcourt against a Wooden Award contender (Oscar Tshiebwe). The winner would also have the inside track to an SEC regular-season title, as this was the only head-to-head matchup between the Tigers and Wildcats this season. Due to injuries, however, the game faded somewhat in the second half, with Auburn pulling away and establishing itself as the clear No. 1 team in the country. The Tigers are also now the overwhelming favorite to win the SEC.
COLLEGE SPORTS・17 HOURS AGO
saturdaydownsouth.com

There’s still a long way to go before March Madness, but the top college basketball prospects are starting to separate themselves from the rest of the pack. The SEC has produced several men’s hoops stars already this year, and many of them could hear their names called early in the 2022 NBA Draft.
NBA・1 DAY AGO
Chicago Tribune

Kevin Lankinen is back on the shelf seemingly as quickly as he returned. The Chicago Blackhawks placed the backup goalie on injured reserve Sunday with a right hand injury a day after he made 40 saves during a 4-3 overtime road loss to the Minnesota Wild. Lankinen appeared in each of the Hawks’ last two games, his first action since returning from COVID-19 protocols. Before that, his last ...
NHL・1 DAY AGO
Sportsnaut

The Vancouver Canucks named former player agent Émilie Castonguay as an assistant general manager on Monday. Castonguay, 35, is the
NHL・8 HOURS AGO